MSI is ready for AM5

Just in time for AMD's Ryzen 7000 series launch, MSI has released five new X670 motherboard lines to support this new generation of processors. With AMD's new AM5 CPU platform, AMD plans to give PC builders a new socket that promises users support until at least the end of 2025. This means that PC gamers may be able to upgrade to Zen 5 or even Zen 6 processors without a motherboard upgrade, which is great news for budget-conscious users.

MSI's new X670 motherboard family includes their new MEG X670E GODLIKE, their MEG X670E ACE, their MPG X670E Carbon WiFi, and their Pro X670-P WiFi, all of which are pictured below.

With their new generation of motherboards MSI is offering support for both Intel XMP and AMD EXPO overclocking profiles with DDR5 memory, a unique set of "performance switch" options for custom MSI overclocking settings, and their "Memory Try It" feature for easy memory overclocking. 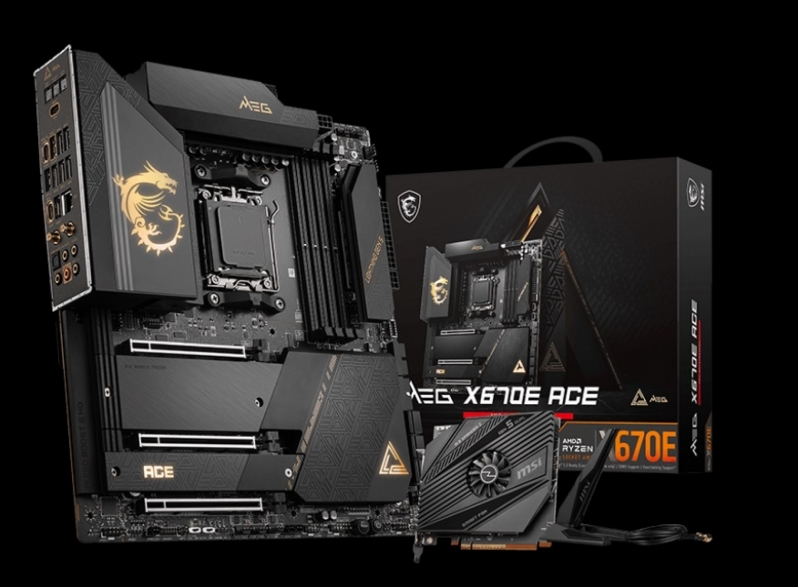 All of MSI's X670 and X670E motherboards support PCIe 5.0, though the number of usable PCIe 5.0 lanes on each motherboard will vary. Please look at the specifications of any motherboard that you wish to purchase to ensure that it meets your PCIe 5.0 system requirements.

MSI has validated that their X670/X670E motherboards can deliver PCIe 5.0 performance with their planned SPATIUM PCIe 5.0 SSD, whih is capable of more than 1.7x the read/write speeds of today's PCIe 4.0 SSDs. 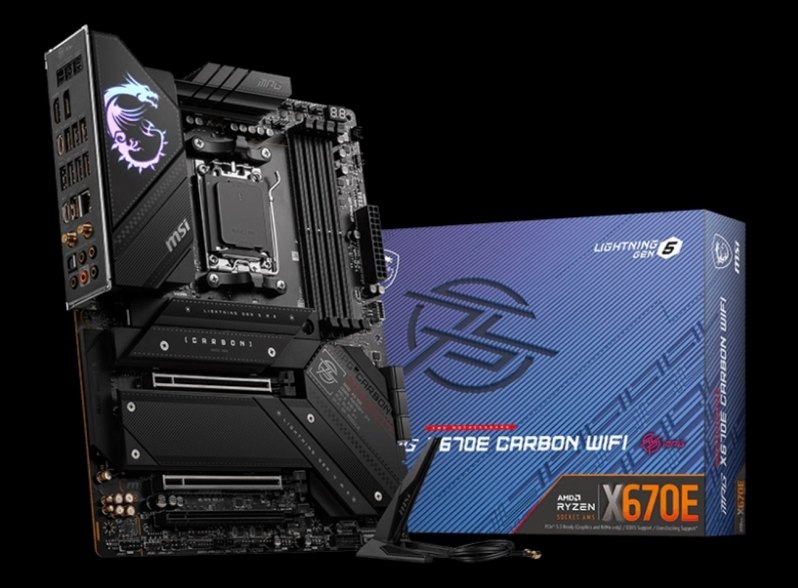 MSI announced the brand new socket AM5 motherboards which includes MEG X670E GODLIKE, MEG X670E ACE, MPG X670E CARBON WIFI and PRO X670-P WIFI to the brand-new AMD X670 Motherboard product lineup. MSI’s X670 motherboards and AMD Ryzen™ 7000 Series processors are here for a new generation of high-speed and efficient computing. As a world-leading motherboard brand MSI’s X670 motherboards are designed to provide the best every performance for gamers, creators and users. With the latest AMD Ryzen™ 7000 Series processors, MSI is ready to push this platform by provided the best performance available for everyone. In use of the 5nm architecture and an all-new DDR5 platform, AMD Ryzen™ 7950X processor will have a ~13% IPC uplift with a boost frequency of up to 5.7GHz and an average 29% Single Thread Performance gain compared to last generation. Let’s take a look at some of the new features from MSI X670 Motherboards. 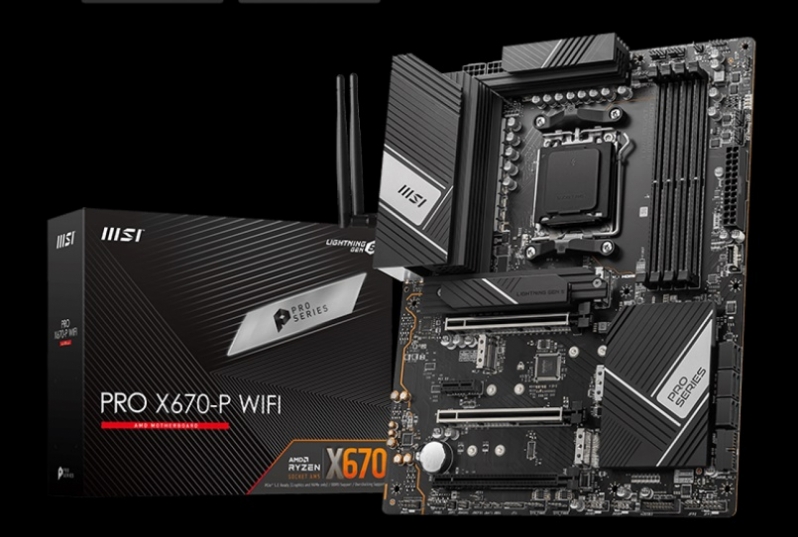 MSI OC Features For AM5 Platform

Performance Switch is a brand-new function within the MSI Click BIOS 5. In addition to default PBO “Precision Boost Overdrive” and MSI’s own overclocking setting, Performance Switch provides 3 presets and a manual choice. This function provides not only to newcomer but also allow hardcore gamers to unleash the performance of AMD Ryzen 7000™ Series processors. 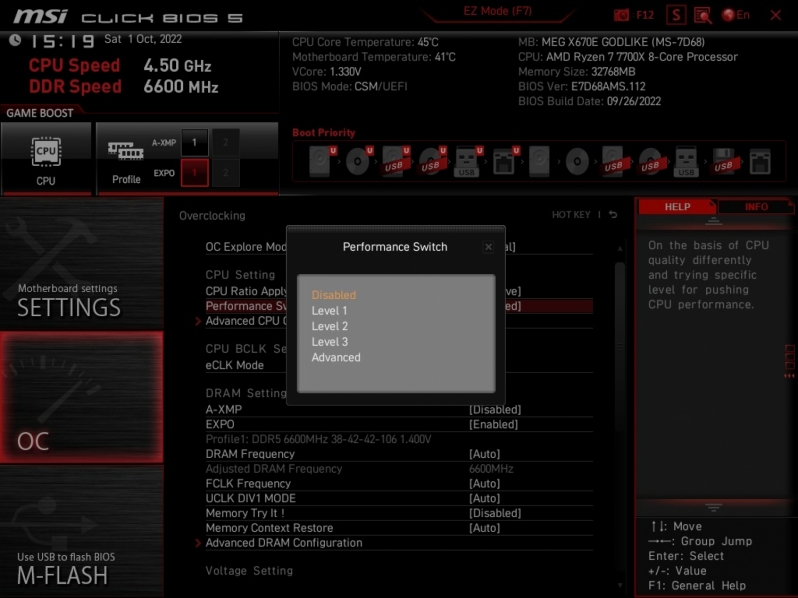 PBO Enhanced Mode is a continuation of a function that exists in the AM4 platform which optimize performance for “Precision Boost Overdrive”, providing a sets of default values and also a manual value for the users who’s more familiar with AMD PBO.

MSI has the OC Engine to help the eCLK for more precisely to ensure stability and performance when overclocking. With the OC Engine that is equip in the MEG Series, other than just having the ability to adjust the BCLK, but also changing frequency of PCIe and SATA can also be either synchronously or asynchronously. 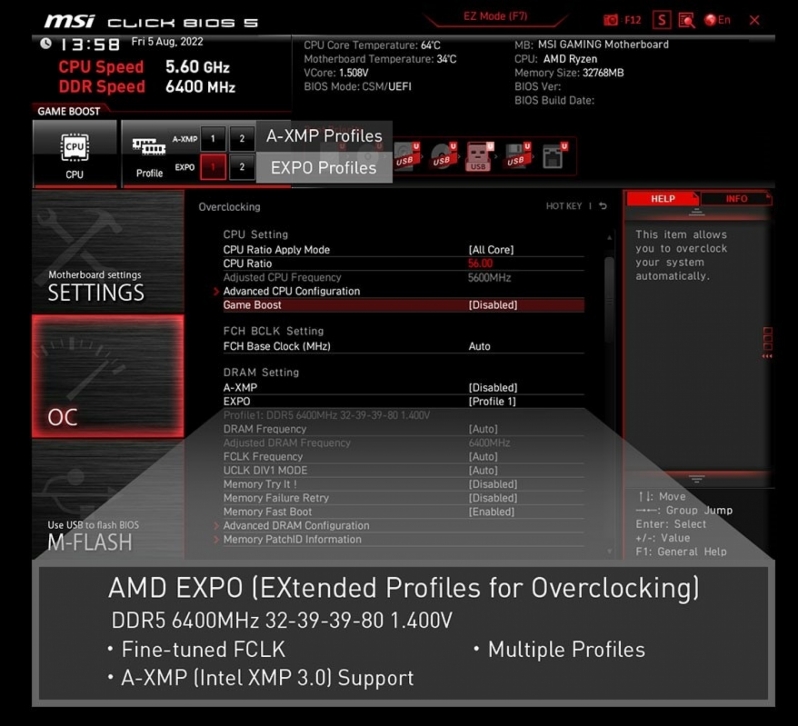 This generation of AMD Ryzen™ 7000 Series processors, AMD has introduced a brand-new feature called AMD EXPO™ technology which stands for “EXtended Profiles for Overclocking”. This AMD EXPO technology allows users to overclock their DDR5 memory with AMD certified EXPO profiles in the BIOS, as well as XMP memory modules will also be supported in the MSI’s AMD motherboard too. It is a much easier way to find an appropriated profile to boost performance with ease.

“Memory Try It” is a well-known function of MSI. For AM5 platform, this function has fine-tuned the FCLK and adjustment to improve memory performance by up to 18% and reduce latency by about 12%, which is from the new SMT process that allows the memory to maintain high-speed transfer. As shown on MSI MEG X670E ACE Motherboard which can reach memory speeds up to 7000MHz easily without any stability issue. 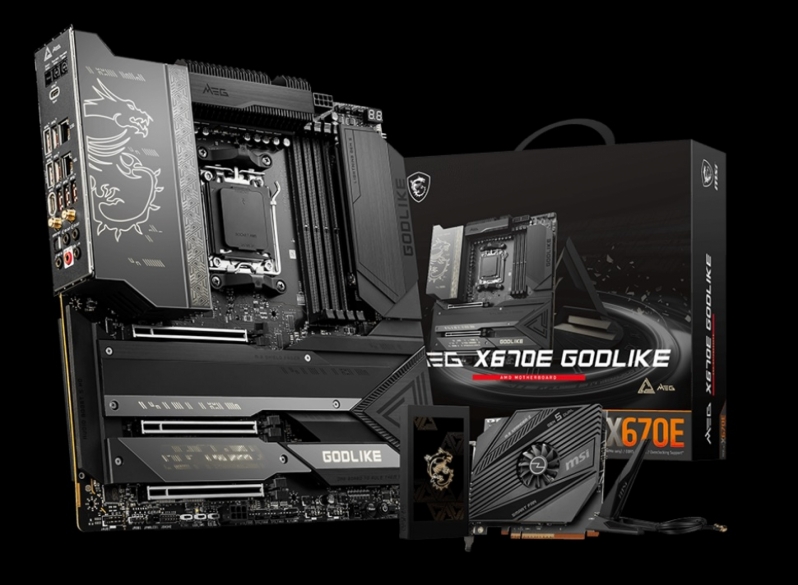 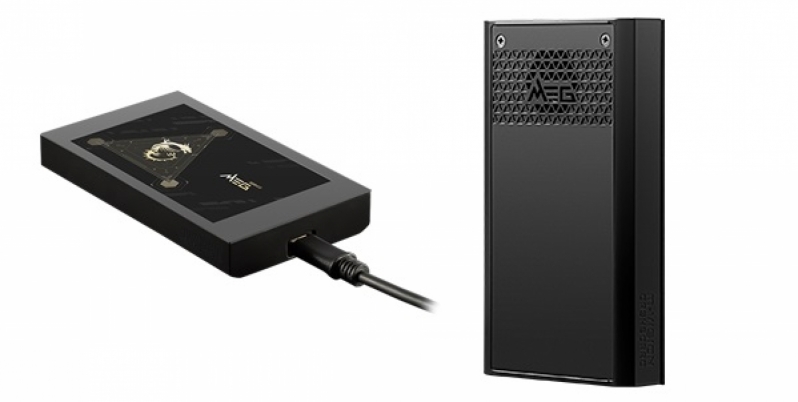 The M-Vision dashboard of MEG X670E GODLIKE is back with a bigger display and more features than before. This time around, the M-Vision dashboard is a now a separate individual display which has a magnetic back that allows you to place it around or inside your PC case. This allows the M-Vision Dashboard to become a secondary display to provide a lot more details of your system status, System Operation, and information, Tools and Hot Key for system tuning etc. It is just as simple as Plug and Play via a USB Type-C cable.

The MEG X670E GODLIKE also comes with a M.2 XPander-Z Gen5 Dual add-in card to support 2 more M.2 Storage. It has a 50mm Double Ball Bearing Smart Fan Control to regulate and cool the M.2 SSD as efficiently as possible. The XPander-Z Gen5 Dual is design for PCIe Gen5 in mind, with both slots support transfer speed up to PCIe 5.0 x4 128Gb/s and are both compatible with 25110 devices. 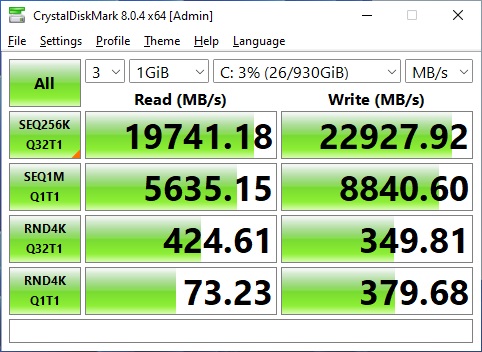 Tested with MSI’s SPATIUM PCIe 5.0 SSDs in RAID 0 configuration shown above, the two Gen 5 x4 M.2 SSDs fitted inside perform exceptionally fast and impressive read and write speeds. It reaches up to 19,700 MB/s read speeds and up to 22,900 MB/s write speeds while having the temperature under control as the Double Ball Bearing Smart Fan takes the heat away from the SSDs with its maximum performance. 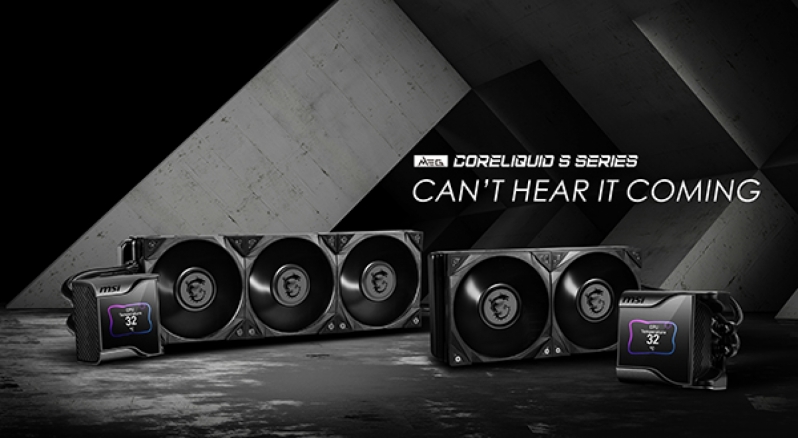 With AMD Ryzen™ 7950X processors that can push frequencies up to 5.7GHz and above, sufficient cooling will be required to cool the CPU to prevent throttling which is what the MSI’s MEG CORELIQUID S360 is here to provide. The MEG CORELIQUID S360 is here to provide the ultimate cooling at no expense of noise. It has a 60mm fan placed within the water block to help dissipate heat for the M.2 SSD, CPU VRMs, and the surround components. The three MEG Silent Gale P12 fans can also provide sufficient airflow to the radiator for efficient cooling.

MSI continues to refine its identity as a high-performance PC brand, and SPATIUM is envisioned to expand our ecosystem and cover the high-performance storage category. The new SPATIUM PCIe 5.0 SSD, with blazing fast transfer speed up to 12GB/s, unites the latest in top-notch PCIe Gen 5 controller technology with high-quality 3D NAND flash, bringing more than 1.7 times faster read/write speeds compared to current PCIe 4.0 SSDs. With compliance of NVMe 2.0 and M.2 2280 form factor, the SPATIUM PCIe 5.0 SSD takes a sensational leap in storage performance and offers long-lasting durability for professionals, content creators, and gamers in an easy installation and extreme transfer speeds for multitasking workloads.

You can join the discussion on MSI's new X670 motherboard lineup on the OC3D Forums.