MSI's ready for the transition to AM5

Press Release - AMD Socket AM5 is coming! Let’s see what new features MSI has in store for their latest AMD X670 motherboards

MSI announced today that the new MEG X670E GODLIKE, MEG X670E ACE, MPG X670E CARBON WIFI and PRO X670-P WIFI to the brand-new AMD X670 Motherboard product lineup. These new X670 motherboards come with support for the upcoming AMD Ryzen 7000 Series processors. We always make sure our goal is to bring every new product as exciting as possible, especially with the new AMD processors and platform. As a world-leading motherboard brand, MSI wants to offer nothing but excitement. Integrated with the newest technologies and packed full of features, MSI is ready to move into the next generation. Let us introduce you to our brand new X670 motherboards.

AMD Ryzen 7000 Series processors are the first to use the 5 nm FinFET process from TSMC as well as introducing a brand-new platform and socket from AMD. AMD Ryzen 7000 Series processors bring new features like PCIe 5.0, DDR5 Memory support and much more! The X670 chipset is divided into two segments - X670 Extreme and X670. X670E supports PCIe 5.0 through both the PCIe slot and M.2 slot whereas X670 motherboards support PCIe 5.0 through the M.2 slot exclusively. In addition to PCIe 5.0 and DDR5 support, all MSI X670E & X670 motherboards specification have been upgraded including rear USB Type-C will now support up to DisplayPort 2.0 output. Even more, MEG motherboards' frmont USB 3.2 Gen 2x2 Type-C will support 60 W Power Delivery. The VRM design has also been upgraded with up to 24+2 Power Phases with 105 A Smart Power Stage. 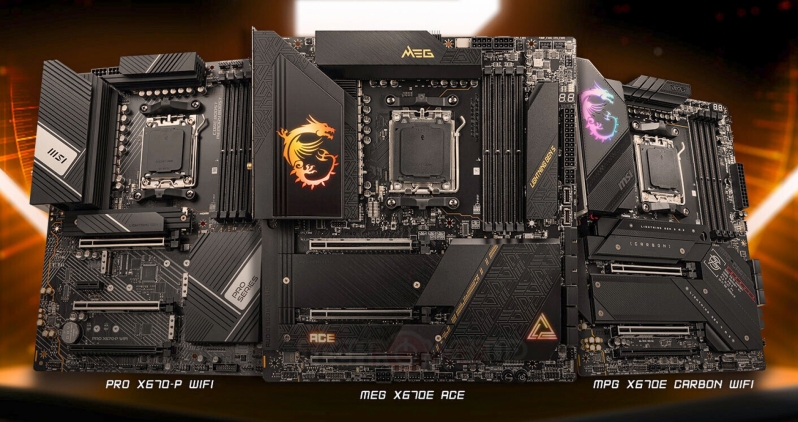 Adopted the brand-new ID concept, both Gaming and PRO series motherboards represent its identity. To synchronize the aesthetic look and perfectly match with the different product lines, especially with DIY components, the Product Identity is ready on the X670 motherboard. X670E Gaming motherboard comes with neat feature designs that further ease your way to enhance your motherboard. MSI have the exclusive M-Vision Dashboard that allows amazing customization with a touch of a finger to see more detail visual aspect of your motherboard status. A few new features that come along with our X670E Motherboards are screw-less M.2 Shield Frozr as well as MSI's patent pending M.2 Shield Frozr with magnetic design to help upgrade or installing M.2 SSD with ease. As well as a smart button in the rear I/O panel for even more customization from entering safe boot, turn on/off all RGB LEDs or activate Turbo Fan. All MSI X670 motherboards will support ARGB Gen2 devices, RGB fanatics will have more options to make their brand-new PC shine even brighter. 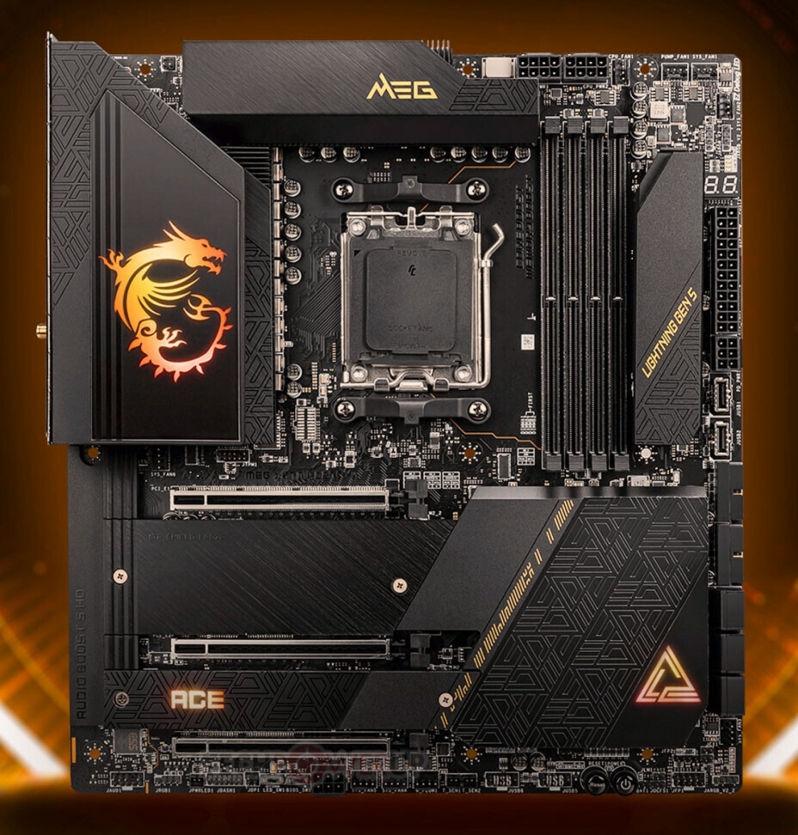 Our MEG Series have more features than ever on our MEG X670E GODLIKE and MEG X670E ACE motherboards. The MEG Series adopt E-ATX PCB size and have up to 24+2 VRM phases with 105 A Smart Power Stage. They are cooled by a Stacked fin array design heatsink as a well as a heat-pipe to dissipate heat effectively while maintaining at peak performance. There is also a MOSFET baseplate for more heat dissipation for the VRM while the Metal backplate is there to help protect the PCB as well as keeping the rigidity of the board. The MEG Series motherboards are equipped with up to 4 onboard M.2 slots including 1 M.2 PCIe 5.0 x4 slot and a M.2 XPANDER-Z GEN5 DUAL add-on card inside the box for 2 additional PCIe 5.0 x4 M.2 slots for ultimate experience. 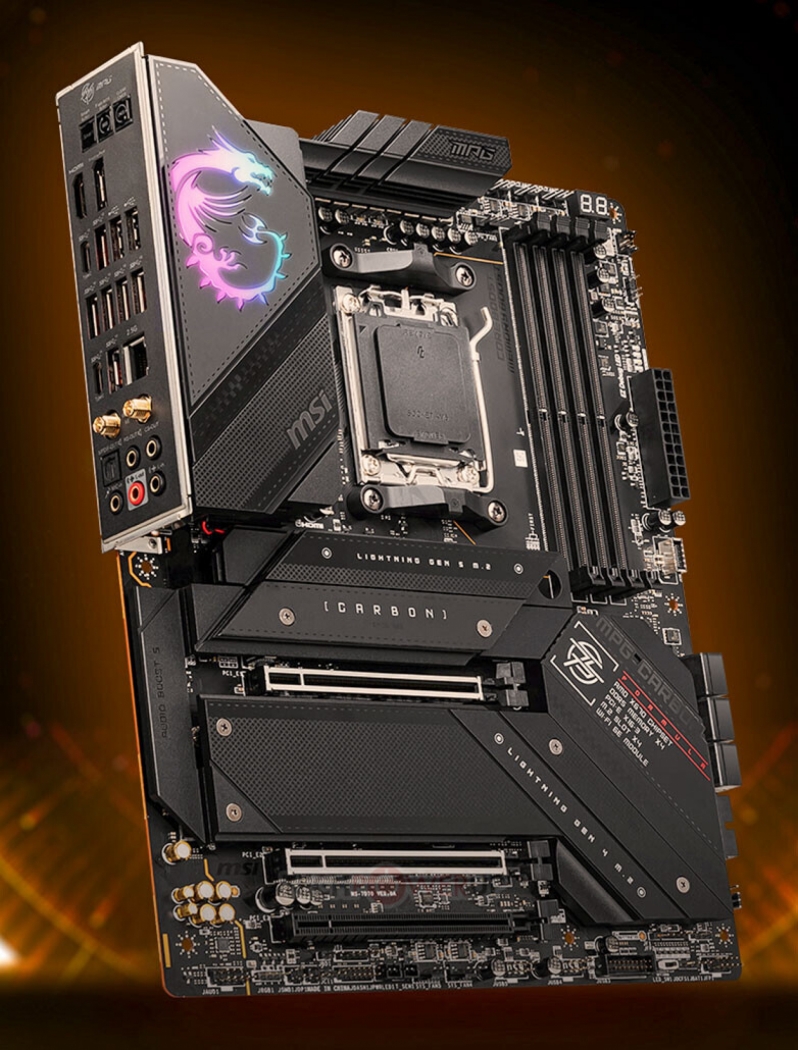 The MPG Series enjoys extraordinary upgrades for the new AMD platform. With the use of carbon black color scheme, MPG X670E CARBON WIFI is steadier than before. This motherboard features 2 PCIe 5.0 x16 slots and 4 M.2 slots that are split into 2 M.2 PCIe 5.0 x4 and 2 PCIe 5.0 x4. It comes with 18+2 VRM power phases with 90 A and cooled by Extended heatsink design. Featured the latest specifications, you will definitely be satisfied with a unique aesthetic finish from the Chipset Heatsink to the VRM Heatsink on the MPG X670E CARBON WIFI. 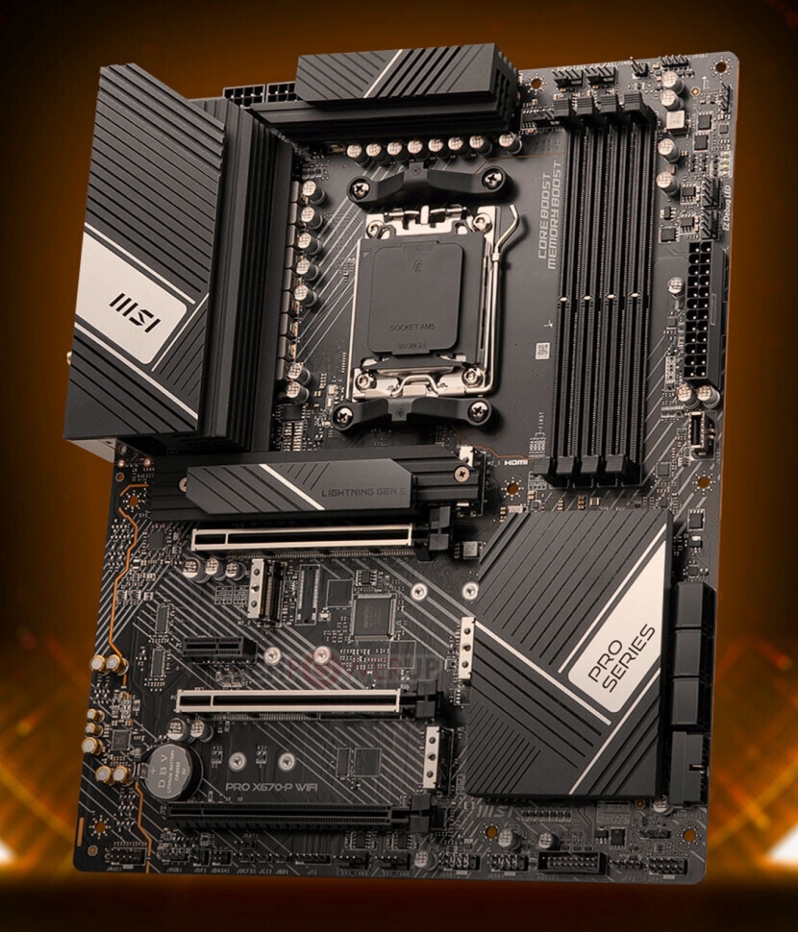 The PRO Series might be the best in popularity for enterprises and creators. With the 14+2 Phases Duet Rail Power System and dual 8-pin CPU power connectors, the PRO X670-P WIFI will tackle any task with ease. The PRO Series does come equipped with 1 M.2 PCIe 5.0 x4 slot, 2.5G LAN and Wi-Fi 6E solution, which can speed through your work with breeze. The linear design matches your office or studio in every possible way for a more unified look.

You can join the discussion on MSI's Ryzen 7000 compatible X670 and X670E motherboards on the OC3D Forums.

Peace Đ
I'd love the asthetics of MSI boards if they didn't have that giant dragon on them... It looks so off...
I still like the look of the carbon, though. It looks a little stitched, as if it was leather.Quote
Reply