This Spectre will be looming over us for quite some time

It is hard not to have heard of Spectre and Meltdown by now, weaknesses that have the potential to leave your PCs susceptible to a range of different attacks. On the Intel side, both software and CPU microcode updates are being released to mitigate the potential impact of these exploits, with MIS now releasing BIOS updates for every Z370 motherboard in their current lineup.

MSI strongly recommends that users update their systems with their latest BIOS versions, as this will allow your PC to remain as secure as possible. While these updates will not completely solve the problem of Spectre, it will mitigate its impact and make systems much harder to exploit.

Below is a list of BIOS updates that are currently available for MSI's Z370 motherboards that contain Intel's security fixes. At this time, the performance impact of these updates is unknown, though they are recommended regardless due to their effect on system security.  Updates for 200-series, 100-series, X299 and X99 motherboards are on the way.

MSI, one of the world leading motherboard developers, has been working swift on solutions ever since receiving a formal notice from Intel® stating that the current Intel® microcode version might be subject to recently identified security vulnerabilities.

To ensure any system powered by MSI Z370-series motherboards is operating securely, Intel® and MSI have been working around the clock to prepare updated microcode and release new BIOS updates, which are now available for download. More information from Intel® on the updated microcode can be found here. 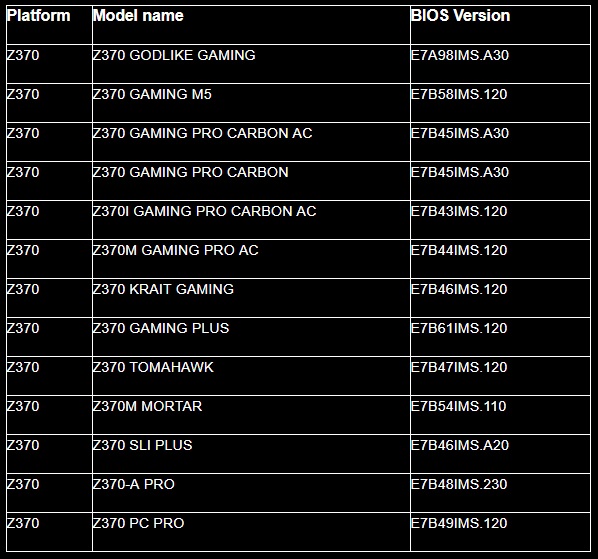 This will be the first of many security updates as Intel attempts to mitigate the effects of both Spectre and Meltdown, though at this time it is unknown how many pre-X99 or 100-series motherboards will receive firmware fixes, or how system integrators will push these security fixes out to their users.

It looks like this Spectre will be looming over the PC industry for quite some time.

You can join the discussion on MSI's BIOS security updates for Intel Z370 motherboards on the OC3D Forums.

TheF34RChannel
So we have to update:

Where does it end?Quote
Reply