One of Intel's main selling points for Alder Lake is its hybrid x86 design, an architectural shift that Intel has marketed as being critical for delivering maximised efficiency and performance with their latest and future processors. That said, it does look like Intel's planning to launch lower-end Alder Lake processors that lack the architecture's efficient cores.

On their latest MSI Insider stream, MSI has revealed that Intel has created a 6-core Alder Lake CPU that only includes Performance Cores (P-Cores), lacking any Efficient Cores (E-Cores). Recent leaks suggest that these new processors will be used for future i5-series chips, sitting below Intel's already announced i5-12600K.

Intel has not officially revealed any Alder Lake Series 12th Generation processors that only feature Performance Cores, making this new 6-core Alder Lake chip an unofficial reveal of a future Intel product. It also reveals that Intel didn't see their Efficient Cores as something that was worth including with their lower-end Alder Lake SKUs.

With a die size that is significantly smaller than Intel's 8+8 core Alder Lake chip, it is easy to see why Intel has designed a smaller 6-core processor die. These dies will be cheaper to produce and allow Intel to create lower-cost Alder Lake series products. That said, Intel's decision to create these processors without E-Cores highlights that the company doesn't believe that their E-Cores are universally beneficial for their future CPU designs. 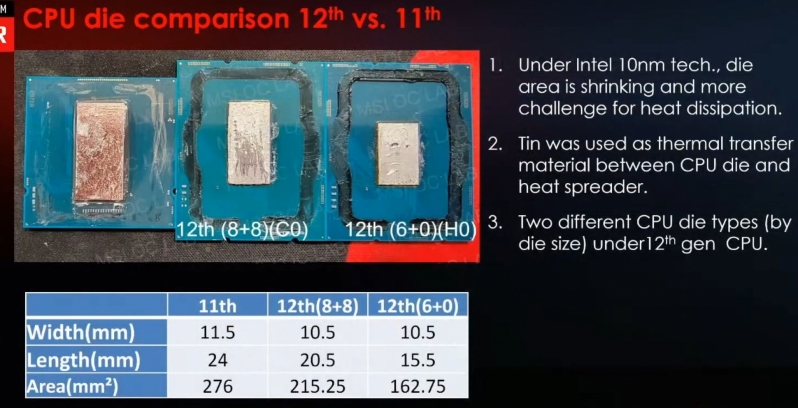 One of the main benefits of Intel's Efficient Cores is that they do not occupy much die space. Intel can fit four Efficient Cores within the same space as a larger Performance Core. This means that Intel could create a die with four P-Cores and four E-Cores that's smaller than their 6-P-Core 12th generation chip. This raises a question, why did Intel create an all-big-core Alder Lake chip?

Intel has likely utilised E-Cores within their high-end Alder Lake processors to boost the core counts of their high-end CPU models to become comparable with what AMD currently offers. Intel could create an Alder Lake chip that has sixteen P-Cores, but such a chip would be significantly larger and more expensive to produce. Additionally, such a chip would also be much more power-hungry.

The fact that Intel has avoided using E-cores on their lower-end chips reveals that their decision to use E-Cores is based on power constraints and die space constraints within the high-end PC market. If Hybrid x86 was always better, why wouldn't they exploit than on all of their Alder Lake chip designs?

You can join the discussion on MSI revealing a big-core-only Alder Lake processor on the OC3D Forums.