Z490 will be Intel's flagship chipset for its new LGA 1200 socket, which will support Comet Lake processors with up to 10 cores and 20 threads. With the GODLIKE, MSI plans to deliver its users an incredible feature set, which is said to support Aquantia 10Gb Ethernet, 2.5Gb Ethernet, WiFi 6, dual Thunderbolt 3 ports and more.

With this new board design, MSI will deliver its users a "Dynamic Dashboard 2" OLED panel, which will allow users to customise their motherboard with unique imagery or display vital system information.

Power-wise, MSI's MEG Z490 GODLIKE will feature dual 8-pin EPS power connections, a 16+1+1 ISL Digital VRM with 90 AMP power stages. For context, these appear to be the same power stages that ASUS use in their ROG Zenith II Extreme, a motherboard that's designed for use with AMD's 64-core Ryzen Threadripper 3990X processor. That's an overkill power setup for any motherboard, nevermind a mere 10-core.

Contained with this motherboard is an MSI M.2 Xpander Gen 4 adapter card, which supports PCIe 4.0 SSDs. At the time of writing, Intel's Z490 series motherboards and Comet Lake series processors appear to lack support for PCIe 4.0. It is likely that MSI is bundling its M.2 Xpander Gen 4 with this motherboards for simple manufacturing reasons, as the company already ships it with its MEG X570 GODLIKE motherboard. Why make a separate PCIe 3.0 version when their existing PCIe 4.0 version is backwards compatible? 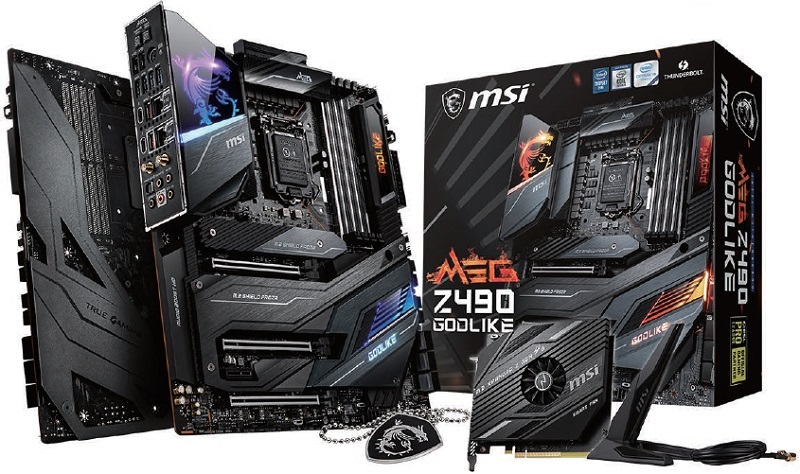 You can join the discussion on MSI's MEG Z490 GODLIKE motherboard on the OC3D Forums.

Avet
Wow, that design... If there weren't any markings I would have sworn it was a ROG board... Cmon MSI... At this point it is laughable...

WYP
Quote:
Some motherboard companies work under the "keep calm and copy ASUS" motto. You'd be shocked how true this is.Quote

AlienALX
Quote:
Why? so you can lol at yourself a bit harder for being silly?

TR 3960x and board is around £1500. Why the heck would you hobble yourself on a dead socket just to spite AMD? and yourself for that matter?Quote

FTLN
Quote:
I meant for Intel fanboys.
Obviously for the educated of us AMD is the only way to go at the moment