The Red Dragon Has Got Bigger! 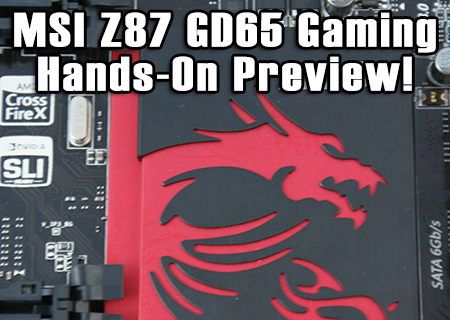 Today we take a brief look at one of the upcoming motherboards from MSI's Z87 range. The Z87 GD65 Gaming has obvious roots in its Z77 counterpart, the Z77 GD65 Gaming motherboard, which in turn was based on the standard Z77A GD65. The standard Z77A GD65 was one of our all time favourite Z77 boards, and it was reflected in the forums. It's pretty safe to say that the GD65 was the number one recommended motherboard for the last generation, so MSI can only hope to carry on their successes with this board too.

MSI have been careful not to create a design too similar to other manufacturers, and we think they've certainly succeeded. The black and red colour scheme is certainly a popular one, with Asus' ROG range cashing in on how popular the good looking boards can be. More recently, Gigabyte's Z87X UD4H has also met the spotlight with it's stunning red and black styling, so MSI should have the recipe for a good looking board.

To show off the board's looks further, let's have a gander at some photos before we move on to the video preview. 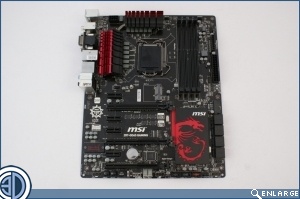 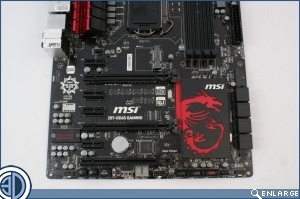 A look at the entire board, as well as a closer peak of the chipset heatsink area and the PCIe lanes. 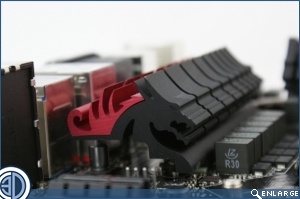 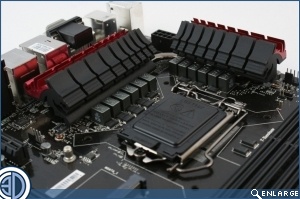 A nice look at how thorough MSI have been with their designs. The heatsinks over the VRMs and power phases are made to look like a dragon. 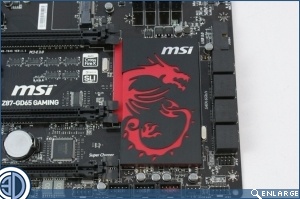 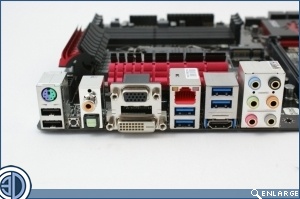 A close up of the dragon logo on the chipset heatsink. Also, a shot of the rear IO panel.

Once again, MSI seem to have produced a great board for this generation. The previous Gaming motherboards were known for their good looks, great gaming features and a competitive price point. The red and black designs are sure to be popular, while the unique way that they're employed should also gather some interest. It's not every day you see a heatsink shaped like a dragon, after all.

Looking at the CPU socket and surrounding area we can see a decent amount of power phases being cooled under the passive dragon-styled heatsink, which indicate that this should be a decent board when it comes to overclocking the processor. It should be said that the Gaming range of motherboards do focus more on their intuitive, useful gaming features than they do pure overclockability.

Taking a peek at the PCIe lanes we can see that the three full sized lanes are electronically wired for 16x, 8x, 8x, and the board also sports four x1 slots for components with less bandwidth requirements. Once again we must stress that we are not sure as to how the bandwidth shall be shared when the lanes are filled up with video cards.
We can also see that the Gaming board comes with 8 SATA ports, which really should be enough for most users with storage devices etc.

Much like the MPOWER MAX, the Z87 GD65 Gaming comes with MSI's Audio Boost - an apparent upgrade to last generation's onboard audio solution. However, this board lacks the PCB separation that the MPOWER board has - a shame, as the added electrical interference may become a distraction during gaming.
Other features that the gaming board includes are Killer E2200 networking, Soundblaster Cinema audio software, and some rather clever abilities when paired with a matching MSI Gaming video card, though we'll have to come back to that at another time.

This board seems like a great option for any gamer who wants a solid platform for their system. It looks good, its power phases are indicative of it being a decent overclocker, and it comes with a plethora of features to help augment your gaming experience. Game on!

A big thanks to MSI for sending us this board for our hands-on preview. Discuss this topic further in the OC3D Forums.

seumasbeathan
Now this board I really like, the dragon heatsinks look awesome and I suspect It will be a decent overclocker toQuote

sheroo
Have to admit that's a fine lookin' board...Quote

Pyros
so in the review you mention special abilities when paired with an msi graphics card, would you elaborate on this pleaseQuote
Reply