I know a lot of you are confused about Intel's new Z490 platform. There's a lot of mixed messages about the platform online, and so far, Intel has said nothing on the topic, at least officially.

During Intel's Comet Lake-S Analysts call this Tuesday, Intel's representatives didn't just dodge every question that we asked about PCIe 4.0 support, they ignored them. This left us with a simple question, what's the deal with Z490's PCIe 4.0 support?

Let's be clear about one thing before we start, Intel's Comet Lake-S series of processors lack support for PCIe 4.0. Even Intel's new flagship, the i9-10900K lacks support for anything higher then PCIe 3.0. PCIe 4.0 support on Z490 is a forward-looking feature for Intel, so don't expect your PCIe 4.0 SSD to run at its full speed on Z490 out of the gate.

Out of all motherboard manufacturers, Gigabyte has taken one of the boldest stances with regards to PCIe 4.0 support. On the boxes of their Aorus series motherboards, they claim that their Z490 motherboards feature a "PCIe 4.0 Hardware Design".

Below is a portion of Gigabyte's webpage for its Z490 Aorus Xtreme, which we have previewed here. Basically, Gigabyte has built its Z490 series motherboards with PCIe 4.0 in mind, using additional PCB layers, PCIe 4.0 compatible components (such as PCIe slots, redrivers and clock generators)  to pave the way for future Intel processors.

In the marketing image below, MSI claims to be "ready 4 the future", claiming that their Z490 series motherboards are also designed with PCIe 4.0 in mind. That said, MSI hasn't marketed this aspect of their motherboards as heavily as MSI.

From what we can gather, Intel is not pleased about motherboard vendors marketing the PCIe 4.0 capabilities of their Z490 motherboards. This is due to the fact that it draws attention to Comet Lake-S' lack of PCIe 4.0 functionality. The image below comes via Andreas Schilling on Twitter. 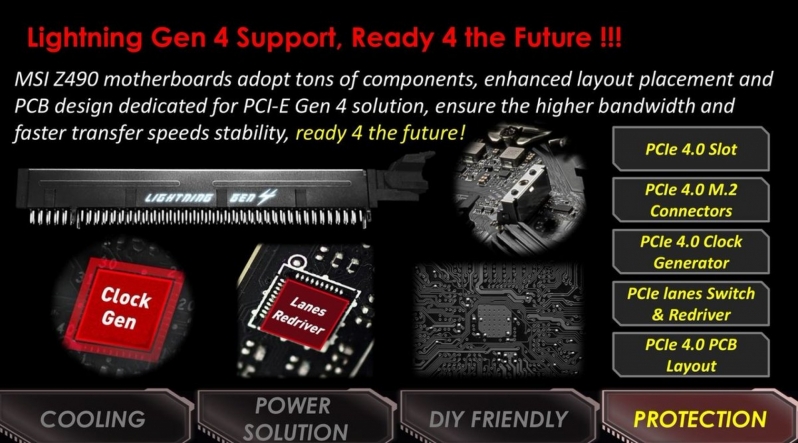 For the most part, ASRock has mirrored Gigabyte's approach to marketing PCIe 4.0 readiness, listing on their website that their Z490 motherboards are all "PCI Express 4.0 hardware Ready".

Again, this suggests that Intel has plans to release future LGA 1200 processors with PCIe 4.0 support. Intel will not comment on the existence of such a processor, or if the company has plans to support LGA 1200 for more than one processor generation. 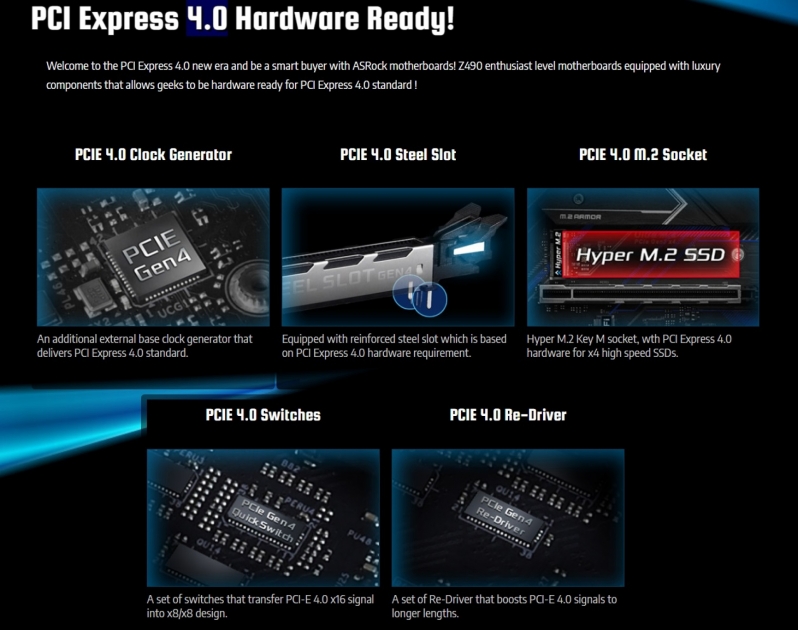 ASUS has taken the most relaxed approach to PCIe 4.0 support on Z490 by refusing to market the feature. In a comment to Andreas Schilling, ASUS confirmed that many of their Z490 motherboards "have been engineered with PCIe 4.0 readiness". However, ASUS is unwilling to proactively market the feature, as all information about Intel's next-generation (post-Comet Lake) processors is under NDA.

Validation of PCIe 4.0 support on their motherboards is also impossible, as that would require access to Intel's next-generation CPU lineup. In other terms, ASUS is unwilling to market an untested feature of their motherboards.

There isn't a satisfying answer here. Yes, the boards are built with PCIe 4.0 support in mind, and no, this feature cannot be accessed using Intel's Comet Lake-S processors.

In the future, Z490 may support PCIe 4.0, but this cannot be verified without testing these boards with Intel's next-generation processors. Furthermore, these motherboards will require BIOS updates to support this feature, a topic which Intel has refused to comment on. Can we even guarantee that Intel will allow this support to be added to Z490? The simple answer is that we can't, at least right now. That said, why would motherboard manufacturers build with PCIe 4.0 in mind if Intel didn't tell them to?

You can join the discussion on Z490's PCIe 4.0 support on the OC3D Forums.

AlienALX
Naughty. I really don't like seeing this. It's totally reaching.Quote

grassman
Either it's cheaper for MOBO manufactures to implement PCIe 4.0 on there boards rather than last gen technology or Intel promised them another generation of processors, Probably the first.Quote

Dawelio
According to HardwareCanucks, their board support it, in terms of having all the traces built in etc. Only that none of Intel's CPU actually support it though. So it's basically more of a "future proof upgrading thing" maybe?...Quote

Board supports it but you can't use it, therefore it's useless. It means you would have to buy a CPU now, hope Intel sort their crap out, then buy another one.

TBH like PCIE 3 board partners should keep it quiet. What I mean is, some high end X79 boards supported PCIE 3 with a patch, but they never told you about it. Now? they are marketing falsely, IMO. Well, probably bent just enough to get around the law.