der8auer is perhaps should perhaps be known as the "king of delidding", the pro overclocker who tries to push the limits of processors with every incoming generation.

Over time he has delidded the seemingly undelidable, extending his talents into the world of soldered processors, including AMD's multi-die Threadripper series, all to uncover whether or not better thermals are possible on the latest processors from both AMD and Intel.

Today, der8auer has delidded his most expensive processor to date, Intel's new Xeon W-3175X processor, an unlocked LGA 3647 (Socket P) processor which sports six memory channels, 28 cores, 56 threads, a base clock speed of 3.1GHz and a boost clock speed of 3.8GHz. This processor is mindbendingly powerful.

Intel has priced this monstrous CPU at $3,000, releasing it with overclocking-grade LGA 3647 motherboards, all of which are expected to cost upwards of $1,000.

Before delidding the processor, der8auer noted that Intel's lack of an integrated loading mechanism on socket LGA 3647 makes the CPU mounting process difficult, often resulting in CPU mounts which lack support for all available memory channels. As a result of this, der8auer's thermal tests were conducted using a quad-channel memory configuration, rather than the full 6-channel config that the processor can offer.

To delid his Intel Xeon W-3175X processor, der8auer used a custom version of his delid die mate to remove the processor's IHS (Integrated Heat Spreader), a process which required an incredible amount of force and  several attempts, thanks to the large surface area where Intel's IHS is glued to the CPU's substrate. In future der8auer might want to invest in some longer Allen/Hex keys. 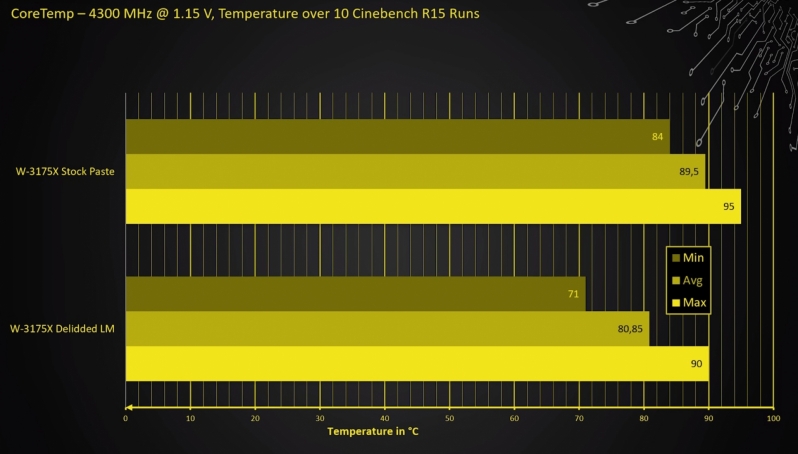 In his testing, der8auer found that Intel's Xeon W-3175X processor could offer better thermal performance after delidding, but uncovered thermal benefits which were much lower than many of Intel's other processor. This could due to several factors, such as the large surface/contact area offered by Intel's staggeringly large monolithic CPU die to the finer manufacturing tolerances that Intel's Xeon processors are manufactured with.

You can join the discussion on der8auer delidding Intel's most expensive consumer processor on the OC3D Forums.

Eddie long
well he was brave , but i'm more surprised at the price being that low for IntelQuote

Peace Đ
So question is: Does he deem it worth the risk? -5Â° during full load on the hottest core seems not that worth to me considering the price tag. -13Â° on the coldest core sounds nice at first, but isn't really great, I guess, because the you're focussing on the hottest core, right?Quote

Warchild
Quote:
He doesnt pay for these chips so bravery thing is not really a concern. What I think is great though is that once he confirms its achievable, he can possibly begin working on his delidding tools.

For many of us, delidding is not worth it due to the risk of damage. However when tools designed for this are brought into the picture then, I think it can be worth doing, even if its 5C. You have eliminated the chance of damage so much.

I'm currently supporting the Ncore V1 kickstarter with very interesting progress. He has even designed his naked die mounts with RGB now.

The difference with this over delidding in general, is that you don't replace the IHS further decreasing temps.Quote

Dawelio
Quote:
So delidding something you paid thousands for, only to gain maybe 5C in temp difference AND to throw your warranty out of the window? When it could give away the coming weeks...

Then you'll sit there with no CPU, with a non working PC and thousands thrown out of the window. And for what? 5C difference?.

Nah, in my eyes it's not worth it. If I wouldn't be paying for the CPU though, then it would be a completely different story.Quote

Eddie long
Quote:
Yep you have a valid point there with the bravery aspect, and in the future I may have to dip my toe into de-lidding with my 8700k but I will see first what it runs like as I'm not going to be stressing it too much.