The launch of a new CPU architecture is always an interesting event, even if it is just a refined design like Kaby Lake over a from-the-ground-up redesign like Ryzen.

This is what will make 2017 an exciting year for PC gamers and builders, as it brings competition to the high-end of the market and has a chance to change the pricing structure of modern high-end hardware.

With launch day approaching, now is a great time to discuss the features of AMD's latest AM4 socket, how each chipset differs and which will be right for you. Now let’s get started.

AMD’s lineup of AM4 motherboards will come with five different chipsets, X370 for enthusiast/premium features and overclocking, B350 for mid-range overclocking and X300 for ITX and small form factor (SFF) overclocking.

Outside of the overclocking segment of AMD’s AM4 lineup will be AMD’s A320, A300 and B300 chipsets, which will offer more basic features and locked multipliers, preventing users from overclocking their hardware to allow motherboards to be created with more minimal power delivery options and more affordable prices. 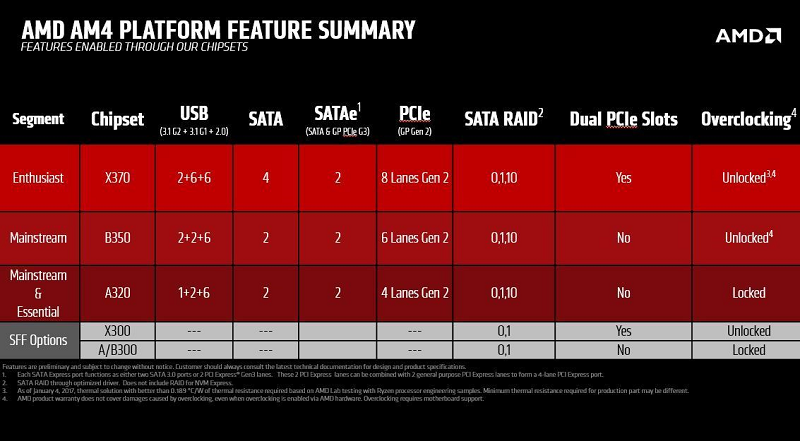 At the top AMD’s AM4 lineup, there’s X370, AMD’s most feature-rich chipset. X370 offers dual-channel DDR4, CrossFire and SLI support, multiple SATA connections and support for NVME storage, native support for USB 3.1 Gen 2 and overclocking support, making it the go-to choice for hardware enthusiasts. X370 will also feature 8 PCIe lanes for I/O, which will allow an PCIe storage device to run without interfering with your GPU’s PCIe bandwidth.

A step down from AMD’s flagship chipset is B350, which features less USB and SATA ports, two less PCIe lanes, and lacks support for CrossFire and SLI. This chipset does retain support for overclocking, though at this time it is unknown if this chipset will support AMD XFR on high-end Ryzen SKUs.

The A320 is the lowest-end chipset and drops overclocking support, along with more USB and SATA ports and two more PCIe lanes. This chipset does still offer native support for USB 3.1 Gen 2, however.

Finally, AMD offers two chipsets specifically for small-form-factor (SFF) PCs; X300 and A300. These chipsets are a lot smaller in size than their counterparts and will be used on mini-ITX mainboards. The X300 chipset will support overclocking, while A300 will not. Interestingly, X300 lists support for dual PCIe slots, too. This is unusual, considering this chipset will mainly be used with mini ITX boards, which typically only offer room for one PCIe slot.

With Ryzen, AMD has promised to bring overclocking to the masses, offering an unlocked CPU multiplier on all Ryzen CPUs.

Unlike Intel, who limit overclocking to their higher-end chipset and specific overclocking-ready K-series SKUs, AMD will offer overclocking support on all Ryzen CPUs and across multiple AM4 chipsets.

Keep in mind that every Ryzen SKU will come with an unlocked multiplier, even the lower-end models, which combined with an affordable overclocking-ready B350 could allow PC builders to achieve unparalleled levels of PC performance.

This will allow consumers to squeeze every bit of performance out of even their lower-end Ryzen systems, assuming they have a motherboard which supports overclocking. 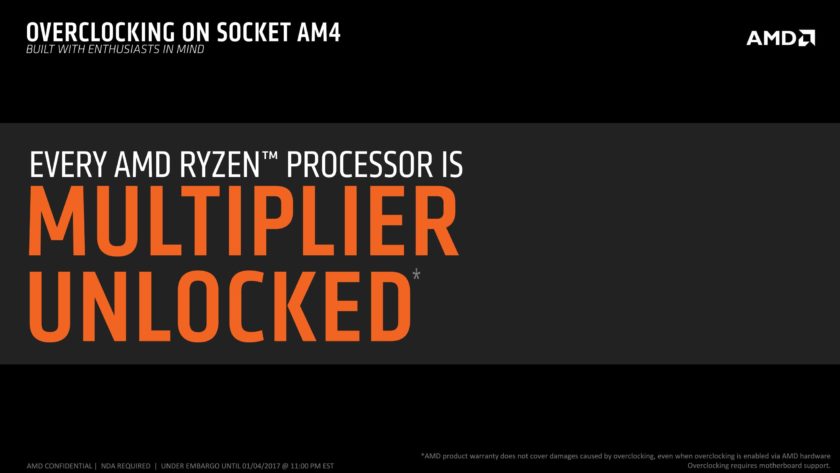 This ties in with AMD’s new ‘eXtended Frequency Range’ (XFR), which 'rewards' consumers with high-end cooling solutions. XFR will boost the clock speed of select Ryzen CPUs beyond stock speed if a user’s CPU cooler can handle it. Users running a high-end air cooler, an AIO liquid cooler or even a custom loop will allegedly see a big improvement in clock speed. The entire process is automated, so even users without any experience in overclocking can enjoy overclocked CPUs with Ryzen.

It’s still unknown whether XFR will be limited to higher-end chipsets. If this is the case, it could be to ensure that compatible boards have the essential power circuitry to handle this technology. The latest rumours do suggest that XFR will be limited to specific SKUs (likely the ones marked with an ‘X’, e.g. R7 1800x and 1700x).

It is currently rumoured that, with Ryzen, I/O and GPU PCIe lanes will be separated, much like Intel’s Kaby Lake CPUs.

AMD’s flagship X370-chipset will feature eight dedicated PCIe lanes for USB, data and other I/O. The flagship Ryzen CPUs will have 24 PCIe lanes itself; 16 for GPUs, 4 for NVME-based storage and 4 for communication with the chipset. That makes for a combined total of 24 PCIe lanes. This is comparable to Kabylake, but quite a bit less than higher-end Broadwell-E chips.

A common trend among motherboards is support for M.2-drives and AM4 is no exception. Some higher-end mainboards support Intel's U.2 SSD connection as well.

All in all, it seems like AMD has a truly competitive and feature-rich package on its hands with Ryzen and socket AM4. Of course, we can't truly judge Ryzen until the reviews go live, but we can't help but feel a little optimistic. Hopefully, Ryzen will bring back some competition to the CPU market, but for now, we can only speculate. That, and look at leaked benchmarks, of course.

You can join the discussion on the upcoming AM4 platform on the OC3D Forums.

Dark NighT
I absolutely love what amd is doing with ryzen and given the prices of these products compared to intel, i really wouldn't care if ryzen is slightly behind intel in performance, the value for money seems quite insane and this should scare intel properly.Quote

NeverBackDown
Yeah I just hope they can deliver, the hype train is strong. Derailing would be catastrophicQuote

AlienALX
Quote:
Have a look for AdoredTV's latest video.

A partner company (OEM) leaked a benchmark for the 1700X (apparently). Adored basically analyses it, sets his ram to the same speed etc etc. By far the most accurate info we have yet and possibly 100% genuine.Quote

Shingara
Quote:
Ye, i have seen that, seems ram is going tobe very important when setting up your machine and choice of products to use with what cpu.Quote
Reply