Will these cache improvements give Raptor Lake a gaming boost?

Intel's Raptor Lake processors are getting a major cache upgrade

Rumour has it that Intel's 13th generation Raptor Lake processors will feature some significant cache upgrades over today's 12th Generation Alder Lake models, and @OneRaichi has released some new evidence that supports this claim in the form of an alleged i9-13900K CPU-Z screenshot.

Raptor Lake's L3 cache has not changed much

With Raptor Lake, Intel has making some major upgrades to their L2 cache structures, both on the P-cores and E-cores. On their P-cores, they are upgrading Alder Lake 1.25MB L2 cache to a 2MB L2 cache for Raptor Lake. This is a 60% increase in L2 cache size, allowing each core to store more data on their low latency L2 cache. This cache decreases strain on Raptor Lake's L3 cache, making it more effective.

On Raptor Lake's E-cores, Intel is upgrading their 2MB L2 cache, which is split between four E-cores, to a larger 4MB L2 cache. This doubles the size of the L2 cache that E-cores have access to. This again allows these cores to store more data on this near-core cache, again reducing strain on higher up areas of Intel's cache structure. 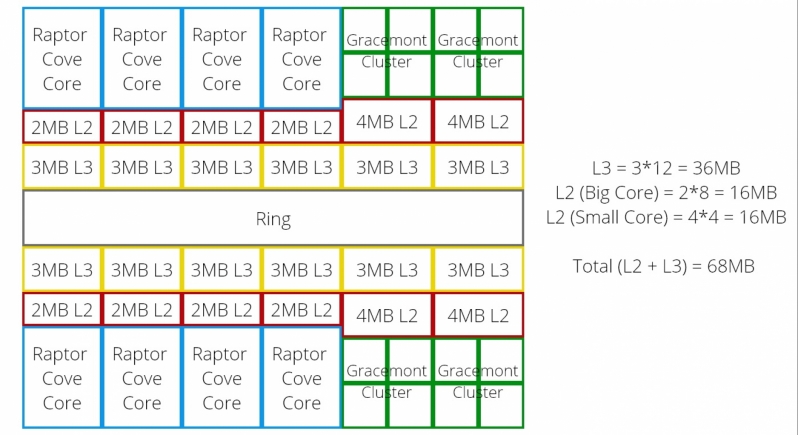 Why these cache upgrade matter

Simply put, if cache sizes did not matter, Intel wouldn't have upgraded their cache sizes with Alder Lake and upgraded them again with Raptor Lake. Larger caches allows Intel's CPUs to store more data on their chips, data which can be access more quickly and efficiently by their CPU cores.

A larger L2 cache will reduce the strain on Intel's L3 cache and accelerate some workloads, and Intel's enlarged and alleviated L3 cache will be able to store more data and allow Raptor Lake processors to spend less time waiting on DRAM. If workloads function well with these new cache sizes, Raptor Lake could deliver significant performance gains for Intel. This may be especially true for gaming workloads, which can be very cache/memory sensitive.

You can join the discussion on Raptor Lake's leaked cache sizes on the OC3D Forums.