A 2x increase in single-threaded performance!

Samsung Electronics has officially revealed their new Exynos 9 9810 SoC, a chip that is set to be part of Samsung's S9 series of mobile devices. This SOC is currently in mass production and is built using Samsung's 10nm LPP (Low Power Plus) process, delivering what is said to be a 10% increase in performance of a 15% decrease in power consumption over the 10nm LPE (Low Power Early) process used on the Exynos 8895.

The performance improvements with this generations will not be due to process node improvements alone. Like the Exynos 8895, the 9810 will have eight total CPU cores, with four Exynos M3 cores at 2.9GHz and four Cortex A55 cores at 1.9GHz. These processing cores offer architectural advantages over their Exynos M2 and Cortex X53 counterparts on the Exynos 8895, which only provide clock speeds of 2.314GHz and 1.69GHz respectively.

In their press release, Samsung states that this new SoC offers a 2x improvement in single-threaded performance and a 40% increased in multi-threaded performance, delivering what could be Samsung's largest generational leap to date. At this time it is unknown how this 2x increase in single-threaded horsepower is achieved, be it a combination of clock speed and IPC improvements or the implementation of a single-core boost clock speed on the Exynos cores.

On the GPU side, Samsung has reportedly opted to move to a Mali G72(MP18) graphics processor, moving up from the Mali G71(MP20) GPU IP from ARM, moving from a 20-core design to an 18-core model while offering a 20% increase in performance. Samsung pushes their "deep-learning" based software heavily on their press release, particularly when it comes to image processing and security features. 3D face scanning is also mentioned in the document. 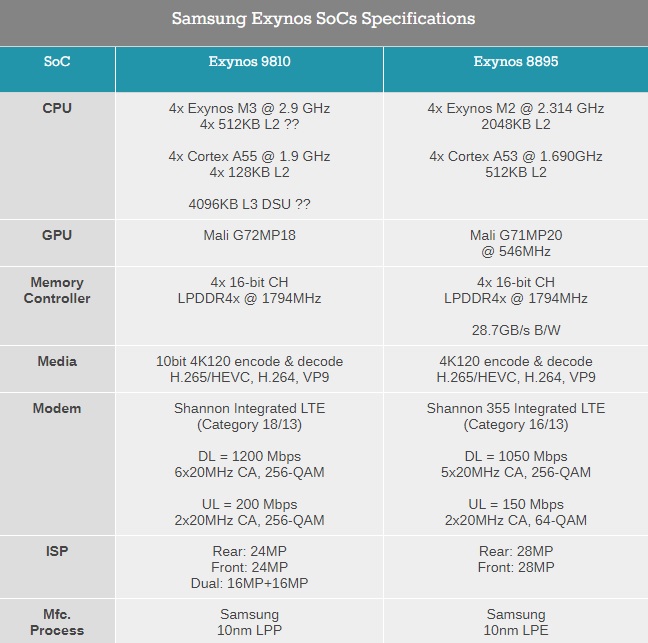 If the performance data about this new SoC is correct, Samsung has the opportunity to take on Apple when it comes to single-threaded mobile chip performance, a place where Apple traditionally has an advantage, making the company's upcoming S9 designs look very attractive from a hardware perspective.

You can join the discussion on Samsung's new Exynos 9 9810 SoC on the OC3D Forums.

NeverBackDown
Impressive. Though the 2x increase is misleading considering it's running at a massive clock speed advantage. Still a big deal howeverQuote
Reply