3D Chiplets and V-Cache are coming to AM4

Enhanced Zen 3 processors are coming, and that's a big deal for gamers

AMD's AM4 socket is reaching the end of its lifespan, but that doesn't mean that there are no plans to inject some new life into the ageing CPU socket. AMD may have confirmed that a new AMD CPU platform is coming in 2022, but AM4's getting one last hurrah early in the same year. 2022 will be a big year for AMD's product release schedule, which is good news for PC builders.

3D Chiplets Come to AM4 - V-Cache is Coming!

Back at Computex 2021, AMD unveiled their 3D V-Cache technology, stacking a 64MB SRAM chip onto their existing Zen 3 silicon to triple the size of its L3 cache. This 3D cache stack is connected using TSMC's 3D Fabric technology, increasing the size and bandwidth potential of Zen 3's L3 cache.

On AMD's 12-core Ryzen 9 test chip, AMD used two Zen 3 chiplets to create an enhanced Ryzen 9 5900X equivalent with 192MB of L3 Cache. This chip can deliver 2 TB/s of L3 cache bandwidth and what's more noteworthy is that this solution doesn't increase AMD's L3 cache latencies in any significant way. If this claim is valid, AMD's 3D cache technology will have no major downsides for consumers. That said, we don't know how much these enhanced Zen 3 CPUs will cost.

AMD has been updating its cache structure with every interaction of its Zen CPU architecture. With gaming workloads being a major focus for AMD, it makes sense for the company to put a lot of effort into their data caching structure. Storing more data on-chip will reduce the amount of time that your processor is waiting on data from DRAM, and increased cache performance (latency and bandwidth) allows on-chip data to be used will less idle time and at a faster rate.

For gaming applications, data needs to be processed quickly and in real-time. With V-Cache, AMD can store more data on-chip with their enhanced Zen 3 processors, resulting in game data being processed faster. That can result in higher framerates and smoother gaming experiences. 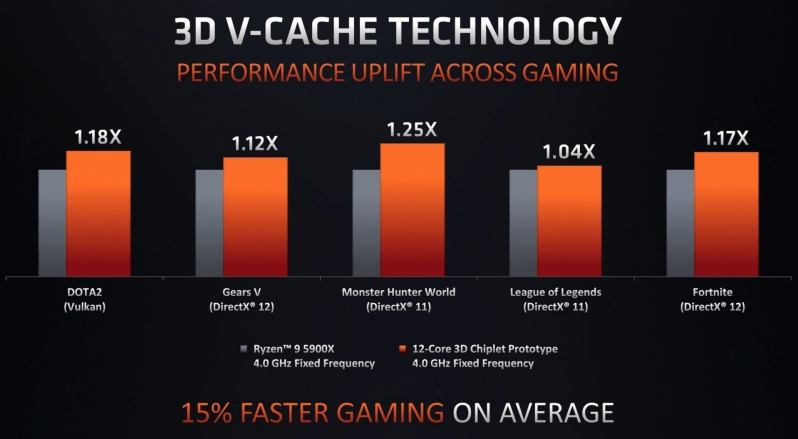 When should we expect AMD's new AM4 processors?

The short answer to this question is early 2021. We expect AMD to showcase these new V-Cache enhanced Ryzen CPUs at CES 2021, highlighting its use of 3D chiplet technologies and the improved gaming performance of their latest AM4 processors.

Currently, we do not know what AMD will call these new processors. AMD could call these chips the Ryzen 6000 series, though new Ryzen 5000 series names are equally possible. AMD may have newer next-generation Ryzen processors later in 2022, but they will require a new DRAM and a new motherboard. For many gamers, AMD's new V-Cache enhanced Zen 3 processors may be a better upgrade option.

YOu can join the discussion on AMD's plans for AM4 in 2022 on the OC3D Forums.

KingNosser
I'll wait for zen4 myself but it'll be intresting to see more info on the v-cache.Quote
Reply