Specifications leak for Intel's H670, B660, and H610 series motherboards

PCIe 5.0 will not be supported by all motherboards

Intel plans to expand its Alder Lake CPU offerings in 2022, giving PC builders lower-cost Alder Lake processors that lack support for overclocking, and new i5 and i3 models that reportedly feature P-cores exclusively.

Alongside these new processors will come H670, B660 and H610 motherboards, each of which act as lower cost entry points into the LGA1700 ecosystem. These motherboard designs will have fewer features than Z690 motherboards, with H670 lacking overclocking support (and lesser USB connectivity) while B660 and H610 have larger drawbacks.

These leaked specifications come via @momomo_us on Twitter. Having translated the image below, we have noted that PCIe 5.0 is an optional feature for Intel's 600 series motherboards, which means some 600-series Intel motherboards will not support PCIe 5.0. If PCIe 5.0 matters to you, check with your manufacturer if your motherboard supports PCIe 5.0 before purchasing it.

With H670 and B660, support for memory overclocking is enabled. This is great news for budget-conscious gamers, as memory frequencies and timings can often be more important than raw CPU clock speeds in gaming workloads.

Note that all Alder Lake 600-series motherboards can be made with support for either DDR4 or DDR5 memory. Since DDR5 memory modules are practically unobtanium right now, we expect manufacturers to focus on DDR4 memory for now. That said, DDR5 memory availability should improve as 2022 progresses.

Look at the image below to look at the chipset specifications of Intel's 600 series motherboards. 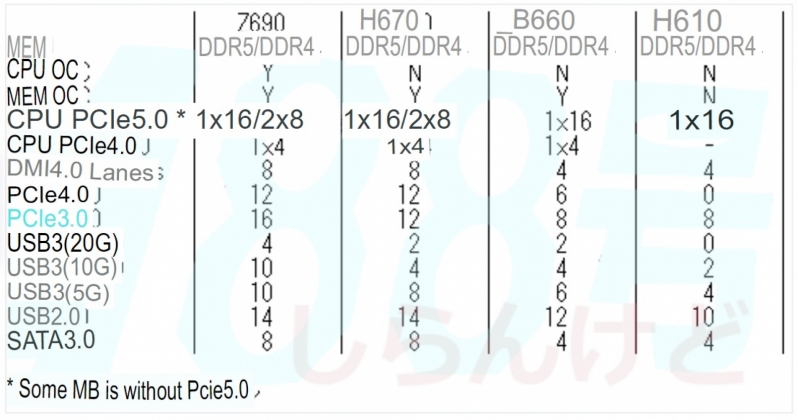