AM5 delivers DDR5 and PCIe 5.0 support

AMD plans to reveal their first chipsets for socket AM5, B650, X670 and X670 Extreme, all of which will be available later this year alongside AMD's Ryzen 7000 series processors. These leaked details come though Videocardz.

Which chipset is best for you? The answer to that question depends on where you want PCIe 5.0, and how much money you want to spend. With B650, PCIe 5.0 is restricted to storage, offering support for next-generation solid state drives. With X670, PCIe 5.0 support is available on your motherboard's primary slot (for PCIe x16 graphics cards) and on M.2 SSD slots. With X670 Extreme, PCIe 5.0 will be available everywhere.

X670 and higher motherboards support "Enthusiast Overclocking", suggesting that AMD's higher-end chipset will support overclocking features that will be missing on B650. Hopefully, overclocking will be available on B650, like AMD's BX50 AM4 motherboards, thought this remains unconfirmed. 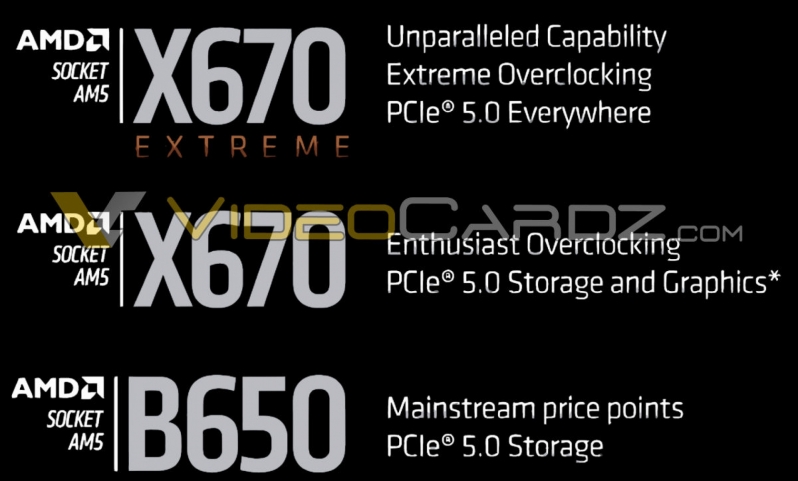 AMD 600-series AM5 motherboards will reportedly offer users up to 24 PCIe 5.0 lanes for storage and graphics, support for up to 14 USB 3.2 20 Gbps ports, WIFI 6E support, and Bluetooth 5.2 support. These motherboards also support multiple HDMI 2.1 and DisplayPort 2.0 outputs, which will be handy features given the fact that all Ryzen 7000 series CPUs appears to feature RDNA 2 integrated graphics chips.

Exact specifications for AMD's 600-series Am5 motherboards will vary on a motherboard-by-motherboard basis. We expect most major motherboard manufacturers to showcase new motherboard designs at Computex 2022.

You can join the discussion on AMD's 600-series AM5 motherboard chipsets on the OC3D Forums.