As a reaction to today's hardware ecosystem, VMware has confirmed that they are adjusting their software's pricing model, maintaining its "per-CPU" pricing model while setting restrictions based on core-count.

With its new pricing model, CPUs with more than 32 cores will be considered as two CPUs, that's the long and short of it. A 48-core or 64-core processor will require two VMware licenses, a change which acts as a direct response to AMD's new 48-core and 64-core EPYC series processors.

"We cannot continue pricing on a per-CPU basis, where CPUs could have unlimited core counts." Says VMware, knowing the implications of AMD's EPYC series processors and their impact on today's hardware market. One of AMD's major selling points for its high-end EPYC processors is that they can act as a dual-socket setup with a single processor, thanks to EPYC's incredible I/O capabilities and staggering core counts. From VMware's perspective, AMD has broken its licensing model by merging dual-socket systems (which would require two VMware licenses) into a single socket (one VMware license)  system.

In the coming years, Intel will respond to this with higher core counts in its future server processors, and this will kill off the per-CPU licensing model as we know it. VMware may be the first to make the shift to a restricted per-core licensing system, but they certainly won't be the last.

Those who are considering AMD's high-core-count processors will see the licensing costs of VMware double overnight, but thankfully, VMware has announced a period of respite before these licensing changes come into effect.

VMware's changes will take place on April 2nd 2020, but "Any customer who purchases VMware software licenses, for deployment on a physical server with more than 32-cores per CPU, prior to April 30, 2020 will be eligible for additional free per-CPU licenses to cover the CPUs on that server."

This change hits AMD the hardest

While Intel does have its Cascade Lake AP series processors, which offer users up to 56 cores, these processors have not seen widespread deployments. As it stands, Intel's commonly available Xeon processors offer users up to 28 cores, making Intel practically unaffected by VMware's licensing changes.

With AMD's EPYC lineup featuring 48-core and 64-core models on its standard SP3 socket, it is easy to see why VMware's licensing changes will impact them the hardest. These licensing changes are designed to target AMD, but forward-looking readers will know that this is also a pre-emptive response to Intel's plans to release higher core count processors into the server market. 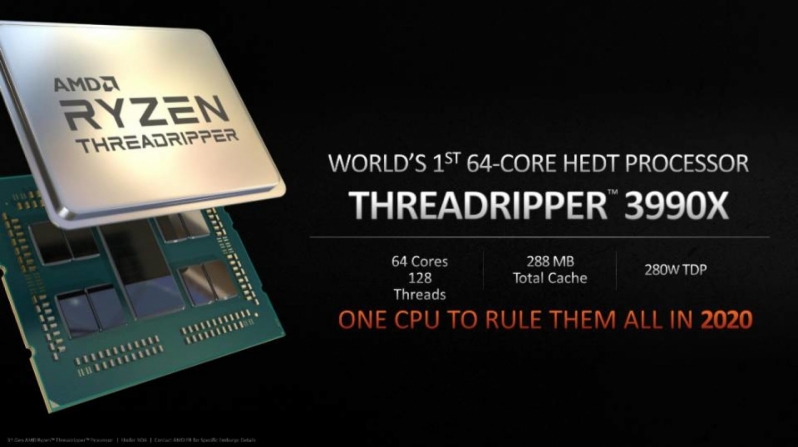 You can join the discussion on VMware's licensing changes hitting AMD's EPYC lineup hard on the OC3D Forums.

tgrech
Lets hope they realise that MCM's break the economic assumptions of their current pricing model and find a proper alternative for the whole system sooner rather than later.Quote

RobM
I guess they have been got at by Intel, in a bid to keep clients on Intel cpus.Quote

g0ggles1994
"To know who organised an event, find out who stands to gain the most from it"
Definitely something going behind the scenes here, given VMWare is a subsidiary of Dell, and Dell are best buddies with another silicon companyQuote

tgrech
To be fair, this more or less just brings their policy closer to the per-core license models of lots of other enterprise software(Such as Windows Server), which is no less draconian or arbitrary, but seemingly more profitable with the popularity of the per-core licensing model.

I think it's safe to say the driving force here is VMwares desire to increase their bottom lines by removing a "loophole" in their pricing model, with no external forces required to motivate that change. The AMD processors will still be cheaper per core than the Intel ones to use and operate too so it doesn't flip any competitive advantage.Quote
Reply