Want a compact AM5 PC without compromising on features? ASUS' MATX ROG Crosshair X670E Gene might be worth considering

With its 16+2 110a power phases, the Crosshair X670E Gene is designed for heavy overclocking, allowing gamers to get the most out of AMD's new Ryzen 7000 series processors. The motherboard also features PCIe 5.0 slots for graphics cards and storage, USB4 support and USB 3.2 Gen 2x2 support. The motherboard also supports additional M.2 SSD slots though the use of an ROG Gen-Z.2 card, allowing more M.2 connectivity on the compact MATX motherboard. 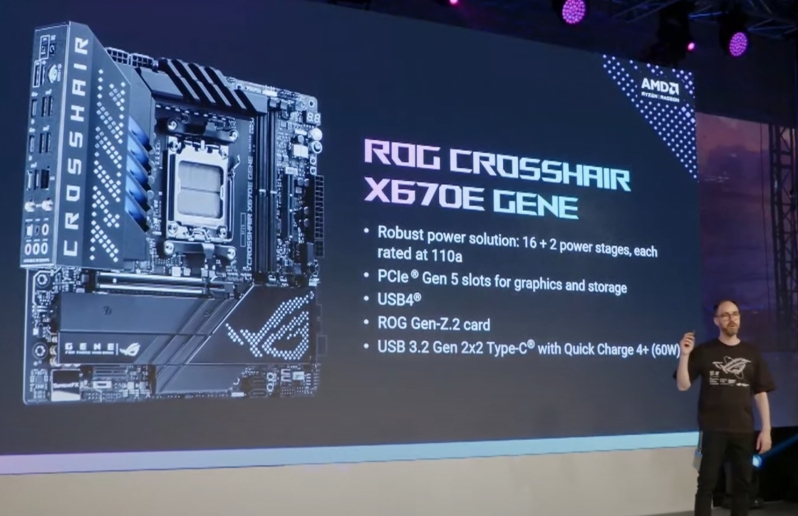 The only real downside of the ROG Crosshair 670E Gene motherboard is that it only features two DDR5 DIMM slots. This limits the amount of DDR5 memory that this motherboard can support. That said, 32GB DDR5 memory modules are readily available, allowing users of this motherboard to have 64GB of DDR5 memory with little issue. Not many users need more than 64GB of system memory, making this downside a non-issue for most PC users.

ASUS' ROG Crosshair X670E Gene will support AMD's Ryzen 7000 series Zen 4 processors though its AM5 LGA socket. ASUS has also confirmed that all of their X670E motherboards will feature ASUS' Dynamic OC Switcher feature, which is an ASUS-only overclocking feature that can allow users to achieve maximised single-threaded and multi-threaded overclocks on AMD Ryzen processors.

You can join the discussion on ASUS' ROG Crosshair X670E Gene motherboard on the OC3D Forums.