Zen 4 is going to be a big deal for AMD

AMD's due to launch their first Zen 4 processors later this year, arriving in the form of their Ryzen 7000 series and their EPYC 7004 series processors. These CPUs will benefit from AMD's latest architectural innovations and newer silicon lithography technology, both of which should lead to performance gains, and power efficiency gains over AMD's existing Zen 3 CPU lineup.

According to the leaker Moore's Law is Dead, AMD's Zen 4 CPUs should feature a 15-24% IPC increase over today's Zen 3 processors, feature AVX-512 support, and feature an 8-14% increase in sustained boost clock speeds. Together, these increases should allow AMD to deliver a 28-37% increase in single-threaded performance with Zen 4 and their Ryzen 7000 series. Larger multi-threaded performance gains should also be possible due to "much higher all-core boost clocks".

With Zen 4, AMD has also reportedly increased the size of their L2 caches from 512KB to 1MB. This doubling of L2 cache size will allow more data to be kept close to AMD's CPU cores, accelerating some workloads. That said, AMD's L3 cache is expected to be 4MB per core with Zen 4, which is the same as AMD's current generation Zen 3 CPU cores (without V-Cache). 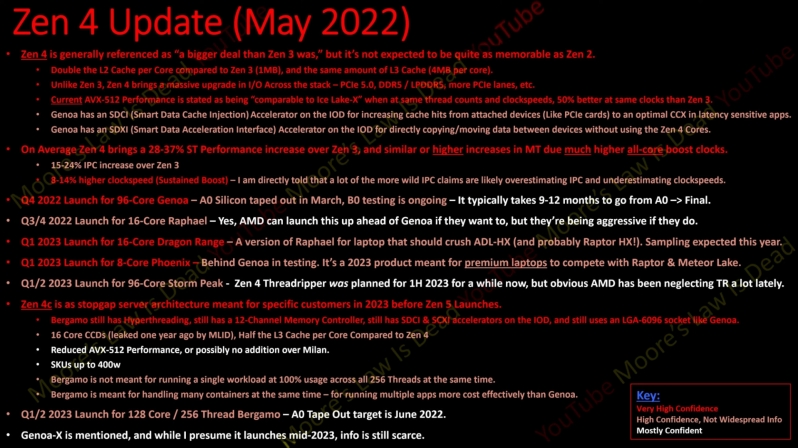 With Zen 4, we already expected to see a significant IPC boost and higher clock speeds. As such, today's Zen 4 rumours are very believable. Together, these changes make the performance gains mentioned by Moore's Law is Dead very possible, and that is great news for consumers. AMD's jump from Zen 3 to Zen 4 will be a larger leap than from Zen 2 to Zen 3, and Zen 3 was a game-changing architecture for AMD.

Moore's Law is Dead states that is sources claim that Zen 4 will be "a bigger deal than Zen 3 was", but that AMD is not expecting Zen 4 to be as game-changing as Zen 2 was. With Zen 2, AMD delivered clock speed increased, huge IPC increases, and a huge increase in Zen's per-core L3 cache. This transformed AMD's gaming performance, a vital workload within today's enthusiast PC market.

You can join the discussion on AMD's latest Zen 4 leaks on the OC3D Forums.