3dfx is "scheduled to return this winter with new graphics cards" - Is this real?

Is 3dfx returning to the GPU market?

3dfx is "scheduled to return this winter with new graphics cards" - Is this real?

Over the past few days, a Twitter account called 3dfx Interactive has claimed that the classic video card brand would be making its return to the GPU market. While this is an exciting prospect, it remains to be seen whether or not this account represents a legitimate company or a group of trolls.

In the accounts earliest Tweet, it is claimed that "3dfx Interactive is coming back, 20 years later." The account also claimed that more information would be made available this Thursday.

When the original 3dfx went bankrupt, a lot of the company's assets were purchased by Nvidia, though it is unknown who gained ownership of the 3dfx brand. It is currently unclear who owns the 3dfx brand, and it is currently unknown if the brand's name has been resold to Jansen Products. As of now, there is little evidence that 3dfx's Twitter re-emergence isn't a massive trolling effort.

It has been claimed that Jansen Products plans to use the 3dfx brand to create new graphics cards, and later to produce "other products relating to smartphones, smart TVs and sound systems". If 3dfx does come back, it won't just be a GPU company.

At this time, there is little evidence that 3dfx is indeed returning. The Twitter account in question could be fake, and there is no readily available information on Jansen Products, the alleged owner of 3dfx Interactive. We expect to hear more about 3dfx Interactive soon, but for now, take anything that you hear about the company with a huge grain of salt. 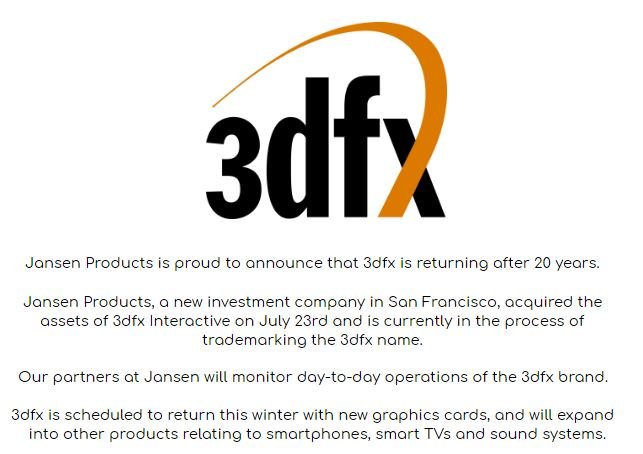 You can join the discussion on 3dfx's alleged return on the OC3D Forums.

Statement on the return of 3dfx. pic.twitter.com/KKsFmAxLAG

Warchild
Maybe it will be a multi display card like Matrox when they shifted their direction.Quote

spolsh
Now suspecting that it's just going to be a "branding" exercise, new stickers on a card made by someone else.Quote

AlienALX
It's not going to be a card at all. The copyright has probably expired, meaning some Chingrish company has picked them up and will put logos on cheap Chinese tat.Quote

NeverBackDown
According to the United States Patent and Trademark Office the trademark for 3dfx is still dead. Meaning it's all fake. If someone wanted to use it, they would have had to get it activated and seeing as Nvidia bought them... ya good luck with that.Quote
Reply