Thanks to the hardware leaker MEGAsizeGPU, we have gotten a look at some early 3DMARK Time Spy Scores for Nvidia's RTX 4080 graphics card, revealing a huge performance uplift over Nvidia's RTX 3080.

In both 3DMARK Time Spy and Time Spy Extreme, Nvidia's new RTX 4080 graphics card appears to be over 50% faster than Nvidia's RTX 3080, representing a tremendous generational performance leap for Nvidia. That said, Nvidia's original RTX 3080 launched with an MSRP of £649, whereas the RTX 4080 will cost over £1,100.

With their RTX 4080, Nvidia will be comparing their new graphics card to their RTX 3090 Ti, highlighting strong performance gains and lower pricing than Nvidia's RTX 30 series flagship. This viewpoint paints Nvidia's RTX 4080 in a better light, though the fact remains that this is a £1,000+ RTX X080 class product.

With AMD marketing 50-70% performance gains with their RX 7900 XTX graphics card over their RX 6950 XT, it is likely that AMD's upcoming RDNA 3 flagship will be able to deliver higher benchmark scores in 3DMARK Time Spy and Time Spy Extreme. This is great news for AMD given their aggressive RX 7900 XTX pricing strategy, though it is probable that Nvidia's RTX 4080 will deliver higher performance levels in gaming workloads that make use of ray tracing.

MEGAsizeGPU has released additional information about their RTX 4080 benchmarks that confirm that the RTX 4080 graphics card tested had its GPU clock speeds boost to 2.9 GHz at its default TDP of 320 watts. 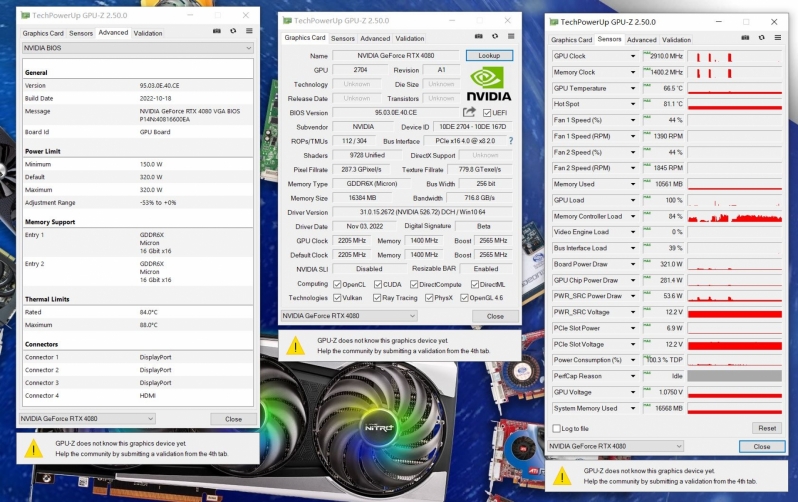 Nvidia currently plans to launch their RTX 4080 16GB graphics card on November 16th. PC gamers can expect us to release full reviews of this graphics card in the near future.

You can join the discussion on Nvidia's leaked RTX 4080 3DMARK scores on the OC3D Forums.

smilertoo
So there's absolutely no generational improvement if it's 50% faster but 80% more expensive.Quote