It looks like AMD's rumoured Radeon RX 5600 XT has appeared on UL Benchmarks' 3DMARK database, with an unknown 6GB GPU delivering performance levels that are over 30% higher than AMD's Radeon RX 5500 XT.

The unknown Radeon GPU in question matches the leaked specifications of AMD's Radeon RX 5600 XT, listing a VRAM capacity of 6GB and memory speeds of 1500MHz, which lines up with 12Gbps GDDR6 memory modules.

Below is a list of 3DMARK benchmark scores for AMD's unknown 6GB graphics card, as compiled by The FPS Review. 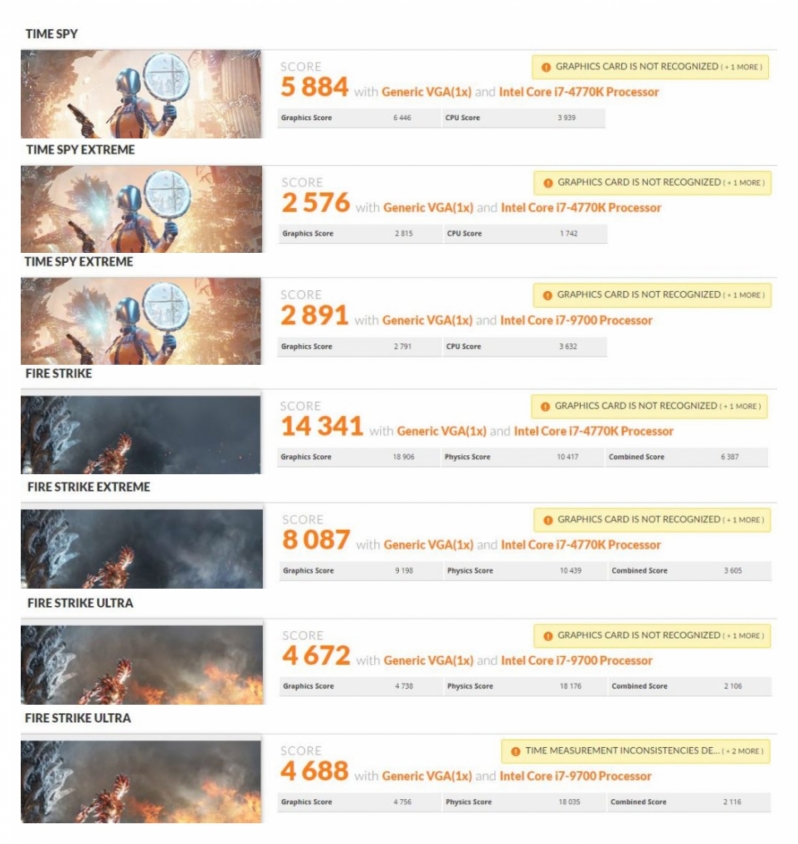 You can join the discussion on 3DMARK results for AMD's Radeon RX 5600 XT series graphics card appearing online on the OC3D Forums.

WYP
Quote:
Yeah, I want to see a BIG Navi card. Better still, I want to see a big RDNA 2 card. With Hardware RT and VRS it could really make Nvidia look bad. Then again, Nvidia only needs to move to 7nm to get a big performance boost.Quote

Avet
Quote:
It doesn't favor AMD because in last 10 years it was coded specifically for Nvidia. No one is breaking world records with AMD cards. Their driver team also needs to step up.

I really hope there will be a BIG AMD card. It would change so many things for the better. But they need to have a proper release and not make a mess of it like they did with every Ryzen launch, Vega, Radeon 7, etc...Quote

All they need to do is just continue with what they are doing now.

Make consoles which devs will support (they have no choice unless they want to lose access to millions of dollars in sales) and continue on making these devs get the games to target the hardware.

But fact is nothing more than matching hardware should be needed, plus 20% to make up the pc difference.

Personally I think AMD are in a much better position than Nvidia to dictate now. Both of the big consoles. That's 2-1 and that's assuming Nvidia are in every gaming pc on the market which of course they aren't.

RTX will die out. I can assure that. TBH it's not even very good. The best display of RT I've yet seen is that unreal demo. It's amazing, and ran better on the Vega 64 than my 2070s. And that's telling about the core design. I think Nvidia need to stop lopping bits off their cards and sell it as something and concentrate on whatever AMD decide to use in the consoles. Or they'll die out, unless they can find some other market to tap into.

Sure Nvidia are holding all the cash right now but guess what? AMD hold the cards. Just like they did with Ryzen.

Consoles are also becoming more like pcs with every gen, too, and eventually people will realise how much they're paying to build a pc in parts over buying this small box that basically does it all and costs way less to do for price to perf.

Most people jumped to pc gaming a few years ago to dodge high priced console games. But in the last two years they're now the same pride and loaded with bugs and crap to get them working.

Consoles have gotten so good with the pro and 1x that the next gen actually excites me more than pc gaming. Mostly because for the whole time DX12 has been out all of the improvements have been happening on consoles.

RDR2 runs solid 4k 30 on XB1X and upscales at times to almost 6k. That's actually sick for the power it has, and makes the mind boggle as to how the next gen consoles will be.