For a long time now 4K monitors have been stuck with maximum refresh rates of 60Hz, thanks mostly to the limitations of both HDMI 2.0 and DisplayPort 1.2, neither of which support higher refresh rates at UHD resolutions.

This limitation has created a situation where most ultra-high-end PC gamers prefer to use 1440p displays, not only due to their lower pixel counts (which stress graphics hardware a lot less) but due to their ability to access higher refresh rates, with 144Hz and 165Hz displays being readily available.

Now DisplayPort 1.4 monitors are starting to emerge, offering double the bandwidth of DisplayPort 1.2 while also providing another doubling in theoretical bandwidth thanks to DSC compression, making higher refresh rate at 4K easily possible.

As the name suggests, the Wasabi Mango UHD430 REAL4K Slim Gaming Monitor comes with a 43-inch screen size and uses a 4K AH-IPS display panel, with the monitor's web listing (in Korean) reporting that the monitor is a 10-bit panel with a G2G response time of 5ms. 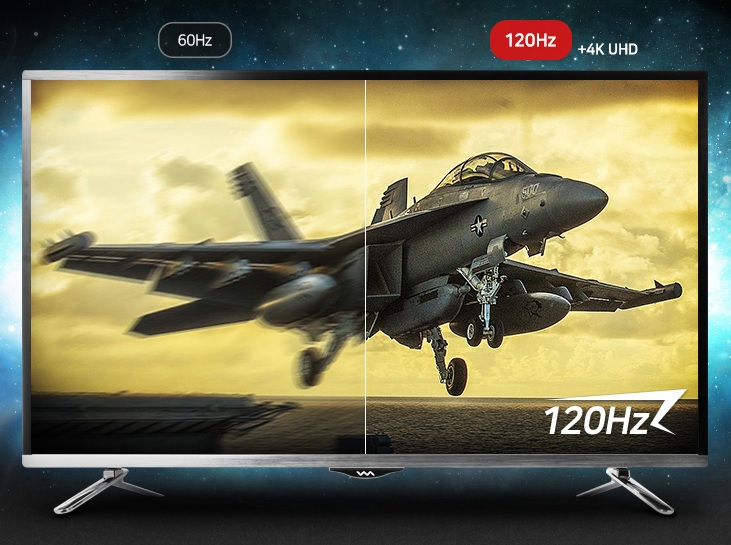 Wasabi Mango lists this monitor with HDR support with a maximum brightness of 400 nits, offering 4K 120Hz support using one of the monitor's two DisplayPort 1.4 ports or 4K 60Hz using any of the displays three HDMI 2.0 ports, making this monitor ideal for use with both PCs and consoles.

Sadly a brightness of 400 nits is a far cry from the 1,000 nits required for full HDR10 coverage, though it is a notable boost over most standard displays.

At this time we have no pricing information on Wasabi Mango's new 120Hz UHD430 REAL4K Slim Gaming Monitor, though it is worth noting that this display brand typically has to be ordered directly from Korea, which may require high shipping fees and import taxes for international buyers.

Even so, it is nice to see a 120Hz 4K monitor on the market, even if most PC gamers won't have enough GPU horsepower to run modern games on such a display.

You can join the discussion on Wasabi Mango's 120Hz 4K UHD430 REAL4K gaming monitor on the OC3D Forums.

Khurs
I've had the UHD420 for about 3 years now and it's been great.
Not sure if it'll be correct this time, but I wouldn't trust the response time. Mine is about 20ms, when advertised for much lower. Still fine, but I doubt any good for 120hz.

Shipping wise, you're best getting off one of the authorised sellers on ebay. Took about 3 days to get all the way from korea, and import fees weren't too bad - about £100 or so. I think they put the value down as the manufacturing fee, so it comes out much cheaper than it should be.Quote

RobM
Who? never even heard of themQuote

WYP
Quote:
They are a Korean Manufacturer who typically does not ship to Europe. One of the companies from when Cheap Korean 1440p panels were all the rage.

Those companies are still around and making decent monitors, though taxes etc make purchasing them in Europe tricky business, not recommended.

If anything goes wrong warranties would be a mess.

Old games could run well on that, but this kind of res is for those mad people who want the best of the best and will buy two of the next GPU as soon as it is out every time. Build it and somebody will buy it.Quote

Mastertroll
I looked at the model number it's been out for years? Where do you buy this?Quote
Reply