AMD is upping their VRAM allocations with the Radeon RX 6000 series. Are AMD more

2021 is a turning point for the PC gaming market. Next-generation consoles like the PlayStation 5 and Xbox Series X have set a new baseline for game hardware requirements. On top of that, both console makers and GPU manufacturers have brought forth new features like hardware-accelerated ray tracing, Mesh Shaders, and Variable Rate Shading to push graphical workloads in bold new directions.

The gaming landscape is changing, and AMD believes that gamers will need graphics cards with more VRAM if they want their systems to last. With their newly announced Radeon RX 6700 XT, AMD's offering gamers 12GB of video memory, 50% more memory than their last-generation RX 5700 XT graphics card.

While competing graphics cards like Nvidia's RTX 3060 Ti and RTX 3070 are great graphics cards at 1440p, AMD believes that future games will start to struggle at Ultra settings as their 8GB frame buffers fill up with data. The Radeon RX 6700 XT feature 12GB of VRAM to give gamers "peace of mind when you click that Ultra Preset", claims AMD's Scott Herkelman.

Today's games use more memory, especially when you're looking for the best texture quality and visual fidelity. Radeon RX 6700 XT is equipped with 12GB of VRAM for peace of mind when you click that Ultra preset. #GameOnAMD pic.twitter.com/c5HUFCyNDu

AMD's marketing makes a bold prediction; VRAM requirements will increase drastically as developers move to support next-generation consoles. That's why the RX 6800, RX 6800 XT and RX 6900 XT feature 16GB of VRAM. AMD is preparing their graphics cards for next-generation gaming workloads, implying that Nvidia's RTX 30 series will not be ready for this transition.

In recent weeks, Nvidia launched their RTX 3060, offering their users 12GB of VRAM. This is the first Nvidia RTX graphics card to launch after AMD's RX 6900 XT, and it is offering more VRAM than almost any other RTX 30 series graphics card. Nvidia's RTX 3080 features 10GB of VRAM, making Nvidia's VRAM allocation for the RTX 3060 appear like a strange choice.

When moving from Nvidia's RTX 2060 to their RTX 3060, Nvidia has doubled their VRAM allocation from 6GB to 12GB. This can be seen as an admission that 6GB is not enough for future high-end gaming workloads, and that lends credence to AMD's marketing with their RX 6700 XT. 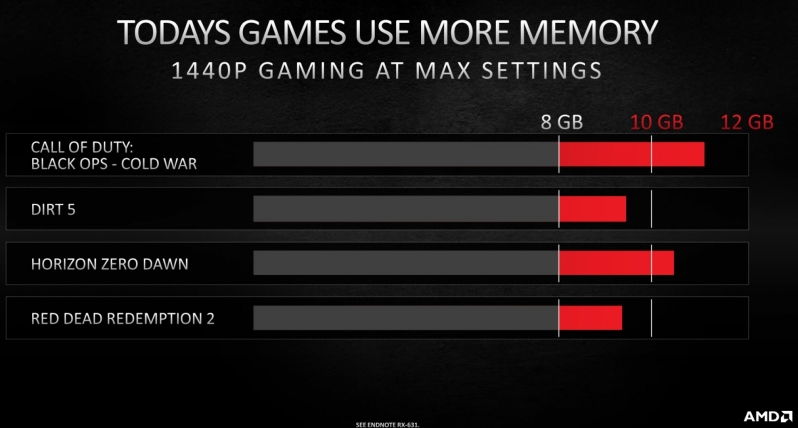 While AMD's data shows VRAM allocation and not VRAM requirements, it is undeniable that PC games are starting to use more GPU memory. Moving forward, this trend will continue, especially as other features like Smart Access Memory (Resizable BAR) start to be utilised by game developers more explicitly.

AMD is banking on their generous VRAM allocations on their RX 6000 GPUs given them a longer lifespan for gamers. Whether or not this "future-proofing tactic will work remains to be seen. Will the RX 6000 series be a new AMD Fine Wine architecture, or will this be a marketing ploy that's all hype and of no substance?

You can join the discussion on AMD's description to add more VRAM to their Radeon RX 6000 series GPUs on the OC3D Forums.

Does it though? No where in the video or anything I have seen claims this?

Looks more like requirements to me personally. Games just claim all the memory available because nothing else will really be used. Gamers use 1 game at a time anyway. We don't really have any tools to see how much memory is actually being used.Quote

EyeOfAC
Seems to me more vram requires more bandwidth, or the total time to read trough the vram will increase. This will lead to increased frametimes.

Infinity cache will only help with repetitive access, so it can only make more efficient use of the bandwidth, not really increase it.

The consoles dont even have inf.cache and XBX fast vram is only 10gb. They will be just as limited by bandwidth. it remains to be seen how high vram usage will actually emerge for the new generation. PS5 looks to be best positioned to use most vram @30fps

So I think this is AMDs VRAM revolution to 30fps gaming.Quote

grec
Quote:
This isn't really true, with predictive caching and prefetching, which is a very mature concept mastered with modern CPUs branch predictors, you DO increase the effective average bandwidth on general transfers, not just repetitive transfers.

The main issue I see with AMD's data, is that with the settings they must be to get this VRAM amount at 1440p, a lot of the games are probably running at like 30 FPS on a RX 6700/RTX 3070 ish card anyway.

There's no way you're actually going to play something like Warzone at these Ultra settings, unless you play only single player.Quote

AngryGoldfish
Quote:
This is what I think.

AMD marketed the Fury X card as a 4k card. It had the bandwidth at the time to support it (and the VRAM amount was holding up at the time) but not the raw GPU horsepower. It was a moot presentation. The situation is flipped here. A 3060Ti with 8GB of VRAM is sufficient because in most cases you would run into GPU horsepower limitations before running into VRAM limitations. There may be outliers down the line that betray this, but as with all cases of future games on older hardware, if you just turn the settings down a notch or two, you regain your performance. I know some refuse to do this and that's OK. Those will have to buy the very best of the best whenever it is available, in other words, each new generation. I personally don't mind turning a setting or two down because I'd rather spend less and still have a great experience.Quote
Reply