A heatsink design that includes both axial and blower-style fans

Acer has officially become one of Intel's OEM partners for their Arc A-series launch, revealing their Predator ARC A770 BiFrost graphics card, a graphics card that features a unique heatsink design.

This 2.5-slot graphics card from Acer features both a blower-style heatsink fan and a larger, and better illuminated, axial fan. This interesting design approach from Acer gives their Predator BiFrost graphics card a design that's similar to Nvidia's RTX 30 series Founders Edition graphics cards, where one fan is designed to push air out the back of your PC case while the other blows air though the graphics card and out the other side. 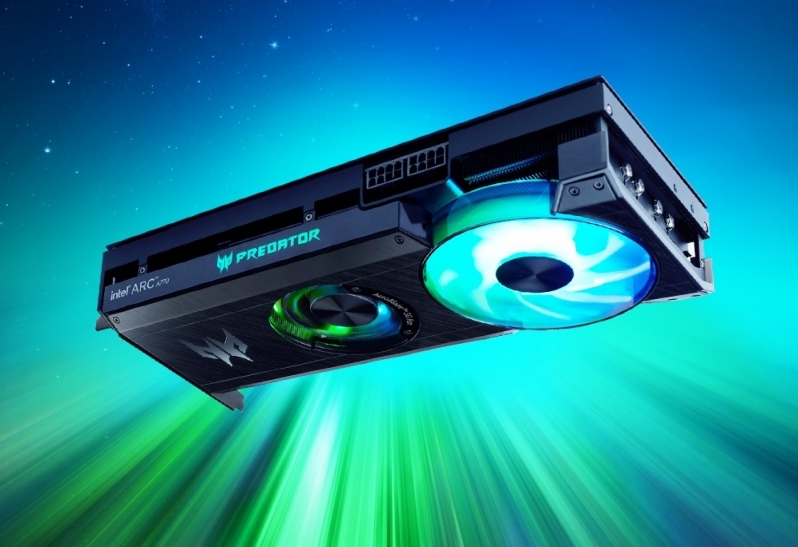 Currently, Acer, ASRock, Gunnir, and MSI have been confirmed as official Intel board partners for their ARC A-series launch. Intel's ARC A770 graphics card is launching worldwide on October 12th, with prices starting at $329.

You can join the discussion on Acer's Predator Gaming ARC A770 BiFrost graphics card on the OC3D Forums.


And elements I don't.

meuvoy
Quote:
Well, at least it looks better than 19 out of 20 NVIDIA 40 series GPUs, GPU manufacturers made plain black bricks for all SKUs this time around... Zorac was the only one with a different design and I did like Zotac's cooler design.Quote
Reply