This screen is 6x faster than a standard 60Hz screen

While many gamers focus on higher resolutions and sharper visuals, others focus on higher refresh rates and more reactive gameplay. High frame rates require ultra-fast displays, and now, Acer has revealed its plans to deliver one of the fastest monitors on the market, its Predator X25, a 360Hz monitor.

Higher refresh rates offer gamers more than just faster response times. The addition of more frames gives gamers more visual data to look at and offers an increase in what we'll call "temporal resolution". The addition of more frames will make moving objects appear clearer in games, and add detail which would otherwise be absent. Games can both look and play better at higher refresh rates.

Acer's X25 360Hz monitor will release with a 24.5-inch IPS screen and native G-Sync support, offering gamers a Full HD (1080p) resolution and support DisplayPort 1.4. This screen covers 99% of the sRGB colour gamut and offers brightness levels of 400 cd/m^2. In addition to DisplayPort, this screen also supports dual HDMI 2.0 inputs and can act as a 4x USB 3.0 hub.

Another feature of this display is ACER's Adaptive Light, which allows the display to remain comfortable to use during extended gaming sessions. This feature adjusts the screen's backlight/brightness to suit the screen's surroundings.

When it comes to ergonomics, Acer's Predator X25 supports tilt, swivel and height adjustment options, and compatibility with VESA monitor arms. Given this screen's hardware G-Sync support, this screen is likely to lack support for VESA Adaptive-Sync or AMD FreeSync. 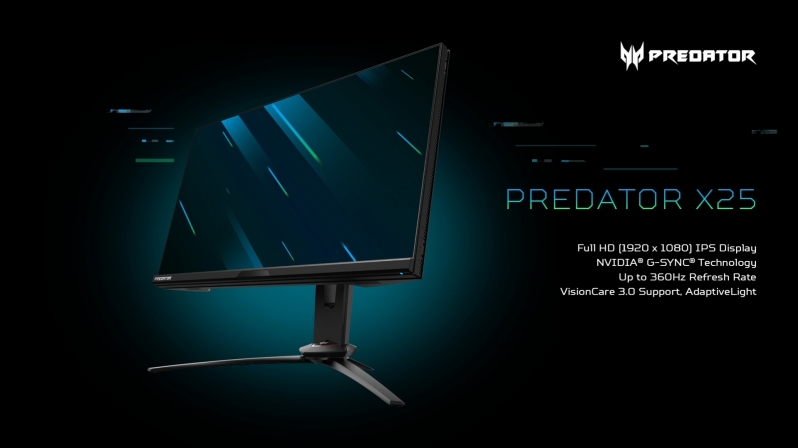 According to TFT Central, this screen will cost $1099.99 in the US and €1,139 in Europe when this display launches in November.

You can join the discussion on Acer's Predator X25 360Hz gaming monitor on the OC3D Forums.

NeverBackDown
IPS with that color accuracy at that speed? That's impressiveQuote

Warchild
impressive but i feel that we need to let go of 1080p displays,

That being said, if everything else is top notch I could get used to it.Quote

Dawelio
Quote:
Not sure what you want to say with this sentence?...Quote