RDNA 3 will use GPU chiplets, and now we know they are using them

AMD's AMDGPU driver, as spotted by @kepler_L2 om Twitter, seemingly confirms that AMD's RDNA 3 flagship (Navi 31) graphics card will feature up to six memory controller dies (MCDs), which should connect to a single Graphics Compute Die (GCD). This lines up with older rumours that Navi 31 will use seven chiplets.

(AMD's mention of six memory MCDs on an RDNA 3 GPU)

V-Cache on a GPU?

According to @Kepler_L2, AMD has plans to add V-Cache to some RDNA 3 GPU models, adding an additional 32MB of Infinity Cache to each GPU MCD. This would increase AMD's MCD Infinity Cache size from 32MB to 64MB. For AMD's Navi 31 flagship, which appears to feature six MCDs, V-Cache would give AMD's RDNA 3 flagship 384MB of Infinity Cache. 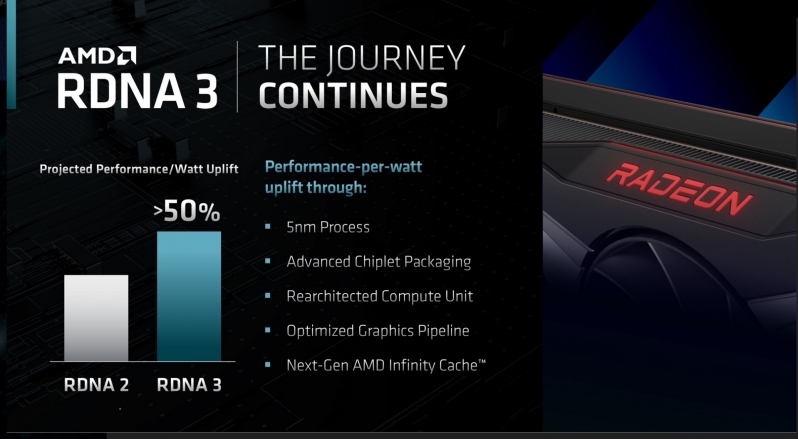 What are the benefits of chiplets?

Larger chips are more expensive to create, as the larger your chip is, the fewer chips you can fit on a single silicon wafer. Larger dies often result in more wasted space on silicon wafers, and manufacturing defects can impact a larger percentage of the chips produced from each wafer. These two factors make large processors and GPU dies expensive to produce, and chiplets can avoid this problem.

By connecting several smaller chips (chiplets) together, companies can create products that act similarly to a larger chip design while being significantly more cost effective. With chiplets, companies like AMD can create larger processors by bringing several chips together, avoiding the pitfalls of creating larger and larger monolithic designs. These pricing benefits can be used to lower the consumer costs of products, and to increase AMD's margins, which is great news for both consumers and investors.

The problem with chiplets is that chiplets require fast interconnects to function, and it can be hard to get multiple separate processors to run together as unified multi-chip product. Companies that are investing in advanced chip packaging technologies and chiplets need to make sure that the advantages of chiplets outweigh these technical challenges, because chiplet-based product designs are only impressive if they deliver strong performance levels without any apparent downsides.

With AMD investing in "advanced chiplet packaging" with RDNA 3, it is clear that AMD is taking a multi-chip approach with their next-generation graphics cards. This is a first for the "gaming" segment of the GPU market, a factor that may place AMD ahead of Nvidia.

You can join the discussion on AMD's latest Navi 31 leaks on the OC3D Forums.

Dicehunter
Pretty cool, I'll end up getting whatever they call their top end GPU but not for a while, Likely around Feb or March in the new year.Quote

Bartacus
I'm a bit of an AMD fanboy, but I think the next gen won't interest me too much. My 6900XT seems MORE than enough for my meagre needs, and it seems to run fine at 2800mhz, so I can't see me needing any more power than that. Still cool to see the advances made though, I still have a Radeon VII that I love dearly in my home theatre PC, and is STILL a killer 1440p gaming card when OCed and water blocked. I just won't replace that thing until I'm forced to, love it.Quote

demonking
would love to see the days of 512 bus again with todays memory and GPU's frame times and 1% lows would be so much better, but prices are bad enough as it is so better not give them ideasQuote
Reply