Following the release of Nvidia's RTX 4070 Ti graphics card, AMD has claimed that their RX 7900 XT is now the "fastest GPU under $900", claiming that their graphics card offers consumers better value than Nvidia's latest offering.

Currently, AMD RX 7900 XT graphics cards are available for as little as £889 at Overclockers UK, and Nvidia's RTX 4070 Ti is available to buy today for £859.99, making both GPUs similarly priced in the UK. Below, AMD advertises DisplayPort 2.1 support, the RX 7900 XT's larger frame buffer, and their GPU's higher performance levels at 4K max settings (without ray tracing) as key areas where their GPU is ahead of Nvidia's RTX 4070 Ti. However, performance in ray traced games is not compared. 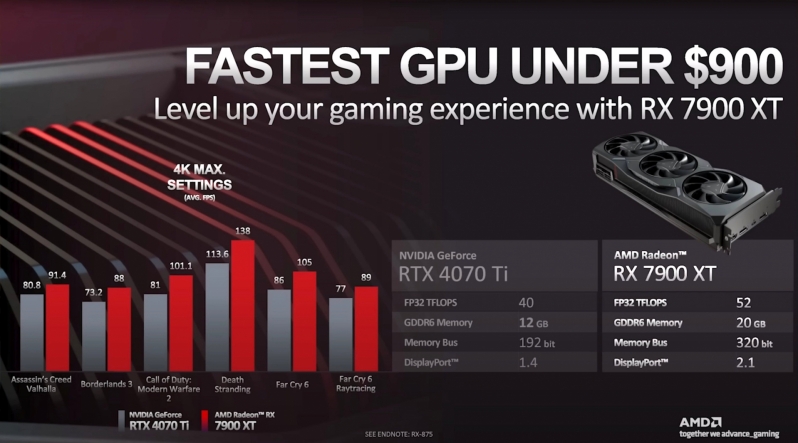 The GPU market is is in a strange position, with all most of the latest GPUs from AMD and Nvidia being readily available in the UK at prices at or close to their official MSRPs. The only exceptions to this are AMD's RX 7900 XTX and Nvidia's RTX 4090, each company's respective flagship GPUs. What this tells us is that many consumers are sick of paying huge prices for graphics cards, and that GPU prices may be forced downwards if demand continues to fall.

With most of the world's nations facing economic downturns, consumers are becoming more value conscious. That means that consumers do not want to pay heavy premiums for products, and that graphics cards with prices that are far above their official MSRPs are not selling well.

You can join the discussion on AMD's RX 7900 XT performance claims on the OC3D Forums.

dazbobaby
I was hearing (LTT I think) that Nvidia's profits - PROFIT's not net income, is up 60%


I know this is about AMD, but how much profit is AMD making on a GPU that's using slightly older nodes? I know they're cheaper than Nvidia, but I think both companies are not just being cheeky, but down right insulting and money grabbing.Quote

AlienALX
Quote:
There is a lot of cosying up going on here.

There is no competition here at all, just price matching. AMD started this with Navi, and have just continued on.

All the more reason to vouch for Intel tbh. As it seems they are the only company willing to cut prices.Quote

AngryGoldfish
Yeah, I wouldn't be surprised if Nvidia and AMD have a WhatsApp chat group discussing prices and agreeing on what 'should' be charged. It's like barbers in one city all agreeing to charge the same amount; and when they're ready to increase prices all do it simultaneously so that consumers have no choice.Quote

dazbobaby
Quote:
I will give AMD the benefit of the doubt, I don't think they're trying to monopolise, I just think AMD look at Nvidia's prices and performance, and just undercut Nvidia slightly.


They both look at the price of "what the market can bear".
It's the same with smartphones.

But notice how TV's are all but touchscreen smartphones now? Yet they are physically cheaper than phones, and yet dozens of times larger. Most now run a version of android.


So why are smartphones so expensive? Because people keep buying them.
Stop buying them and the prices have to come down.Quote

AlienALX
Quote:
Well Jen and Lisa are related so it doesn't take an awful lot of working out really.

Daz. They are not monopolizing it's more price fixing.Quote
Reply