During their Ryzen 7000 series reveal stream, AMD publically demoed a RDNA 3 based graphics card with a new Zen 4 processor. Here, AMD teased their new RDNA 3 GPU design, which appears to be similar to their Radeon RX 6000 series products, albeit with what appears to be a mostly black aesthetic.

Below, you can see a triple-fan RDNA 3 based graphics card that features an updated heatsink design and an unknown power connector. AMD's teaser is designed to reveal no real details about their upcoming RDNA 3 graphics cards, though it is encouraging to see that AMD's new "Made By AMD" heatsinks are as robust as their predecessors.

When describing their RDNA 3 based graphics products, AMD's CEO, Lisa Su, stated that its "performance looks absolutely wonderful" and that their new graphics architecture will deliver a 50% increase in performance per watt over their current-generation RDNA 2 designs. 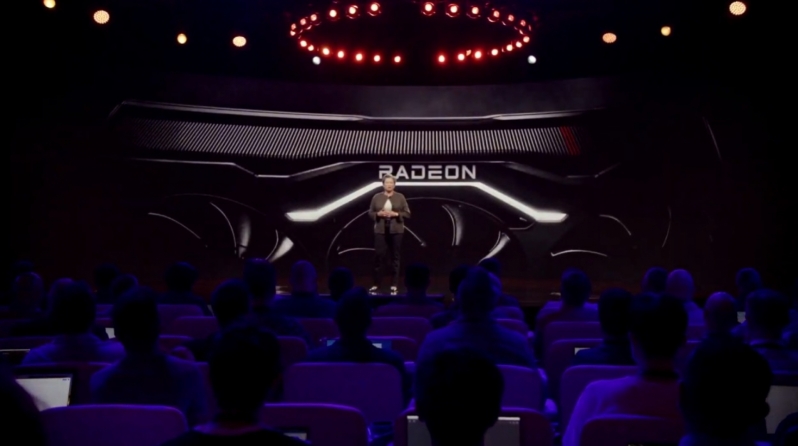 At their live event, AMD also showcased a Ryzen R9 7950X processor running Lies of P at 4K with Ultra settings with a Radeon RDNA 3 based graphics card. No performance info was shown, though the CPU/GPU setup appeared to run the game with a smooth framerate.

Sadly, AMD did not reveal when we could expect to hear more about their Radeon RDNA 3 based graphics cards, though Lisa Su did confirm that RDNA 3 would be ready to launch this year.

You can join the discussion on AMD's RDNA 3 demo on the OC3D Forums. 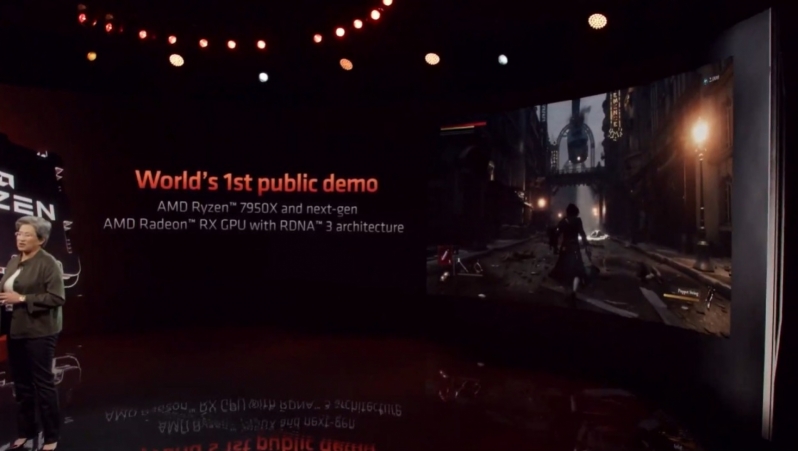 NeverBackDown
50% increase is quite impressive for rasterization tasks, if it's for RT performance and they aren't mentioning that, it's not as impressive considering how bad they were before.Quote

Bagpuss
Quote:
Unless AMD have another 9700 Pro moment, they'll always be playing catchup to Nvidia with Ray Tracing.Quote

AlienALX
Quote:
To be fair until RT becomes essential (IE in every game) none of that matters.

If I drop res/settings I can max it out on the AMD card I have. Sure, it would perform way less than Nvidia but when you have about three titles that are actually decent with it it really doesn't matter.

Refusing to pay £55 for DL2 I found a naughty copy the other day. Installed it, and once again the RT effects are just full of grit and artefacts. So it kinda makes me wonder if it's really worth bothering with at all.

It apparently makes a huge difference in Spiderman. So I transferred that to my 2080Ti rig on the TV and tbh? I didn't notice any difference. I deliberately did not enable it on the desk rig either, hoping to see a massive difference. Fact is when you are flying along on the web you are focussed on where you are going, not what is passing you by.

Even without RT the game looked absolutely gorgeous.

I think the main difference this round will be price. Apparently AMD have been able to cram a lot more into a smaller die, lowering the infinity cache because it didn't make enough of a difference, and thus will be able to compete on what counts - price.

And this round? well mining has gone, so they are going to have to behave themselves.

From all accounts this could be AMD's Maxwell moment, and that's friggin HUGE.Quote

NeverBackDown
Quote:
AMD just needs more software engineers. Using them to create features in tandem with GPU design like Nvidia does. That's really there only downfall.Quote

ImprovizoR
Quote:
Don't worry. They don't have to play catch-up with their pricing.

If AMD aims to have a Maxwell moment, as AlienALX put it, they're gonna have to offer much more aggressive price points. Which I doubt will happen. Don't forget how relatively cheap the GTX 970 and the GTX 980 were.Quote
Reply