Well... this is embarassing

"If what AMD's saying is true, we may be reaching the end of the 4GB GPU era." That's what we said following the release of AMD's "Game Beyond 4GB" blog post in 2020 (link). Here, AMD showcased the benefit of graphics cards with larger frame buffers, flatly stating that 4GB of VRAM "is evidently not enough for todays games".

Now, two years have marched on and AMD's singing a new tune, deleting their "Game Beyond 4GB" post ahead of the launch of their 4GB Radeon RX 6500 XT. This change was spotted by Kitguru's Dominic Moass, who became the first to highlight AMDs change in tune. It looks like AMD now think's 4GB is good enough for today's games.

Frankly, AMD's deletion of their "Game Beyond 4GB" blogpost is hugely embarrassing. By attempting to hide the RX 6500 XT's shortcomings, they have showcased that they are willing to hide information about their past products to make their current-generation offerings look better. Their "Game Beyond 4GB" post was widely reported on back in 2020, and gamers have not forgotten what AMD has said about 4GB graphics cards.

With their 8GB RX 5500 XT, AMD showcased performance gains of between 12% and 97% over their 4GB RX 5500 XT using High, and Ultra settings across a variety of PC games. These results confirmed back in 2020 that 4GB of VRAM was not enough for modern games at their highest settings. In 2022, this fact has only become clearer. The PS5 and Xbox Series X both feature 16GB of VRAM, and that fact alone means that modern games (and future games) will requiem more memory. If 4GB was not good enough in 2020, it definately isn't enough in 2022.

Above is what we said about 4GB graphics cards in 2020, and today our opinions have not changed. Today, 4GB graphics cards have only one advantage, and that is that those graphics cards are not appealing to cryptocurrency minders. 4GB is not enough memory for Ethereum mining, which means that AMD's Radeon RX 6500 XT is better catered to gamers than Ethereum miners. That said, 4GB of VRAM isn't exactly optimal for modern PC games. 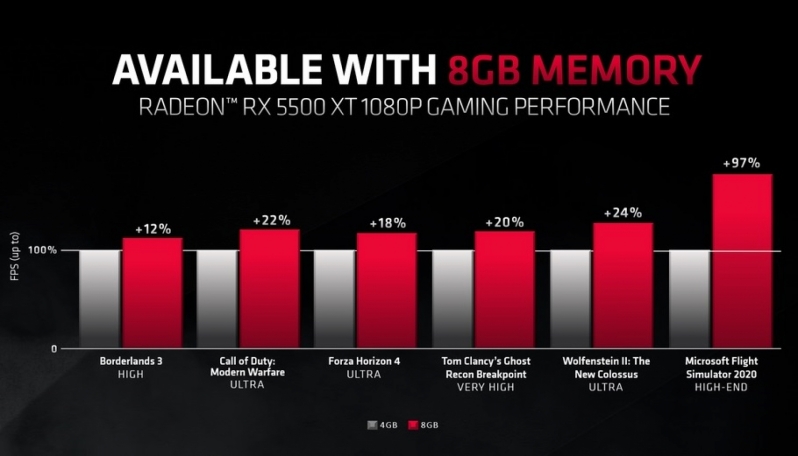 We understand that AMD's RX 6500 XT is limited to 4GB for a reason, and that reason is its small 64-bit memory bus. This small memory bus only supports VRAM capacities of up to 4GB across two 2GB (16Gb) GDDR6 memory chips. For cost reasons, AMD cannot mount additional memory chips on such a small memory bus. This limits the RX 6500 XT to 4GB of VRAM, which is not enough VRAM for modern games at very high/ultra settings.

AMD, the deletion of your "Game Beyond 4GB" blog post baffles us. Did you expect gamers not to notice this? Did you expect gamers to forget that you told them that  4GB "is evidently not enough for todays games"? Deleting an old blogpost is one thing, but deleting it ahead of a tis product launch is shameful.

Also, let's not forget when you started marketing that "today's games use more memory" last year after your Radeon RX 6700 XT 12GB launch.

You can join the discussion on AMD hiding 2020's "Game Beyond 4GB" post ahead of their RX 6500 XT launch on the OC3D Forums.

Gambit2K
That's what mining has done, we get an inferior product. If not I have no doubt the 6500 XT would have atleast 6 or 8 GB.Quote
Reply