AMD is rumoured to be creating a new GPU micro-architecture

A entirely new architecture, or just another iteration of GCN?

AMD is rumoured to be creating a new GPU micro-architecture

Today a lot of rumours are circulating surrounding AMD's "Next-Gen" Radeon graphics, especially in regards to Navi's successor, two generations beyond AMD's current Vega offerings. This "Next-Gen" GPU product is listed on AMD's current GPU roadmaps with a release timeframe in 2020, though at this time it is unknown precisely what AMD plans to deliver with this upcoming 7nm+ chip design.

We must remember that Radeon's upcoming Navi architecture remains shrouded in mystery, leaving looks further down RTG's roadmap shrouded in even more secrecy. Nothing here is confirmed and everything reported on this topic right now shouldn't be considered anything other than hearsay, so remember your daily helping of salt when assessing these rumours.

Reports of a successor to GCN started circulating from WCCFTech, stating that Navi will be AMD's last GCN-based architecture and that the company expects a significant leap in performance with their "Next-Gen" product.

New CPU and Graphics architectures take a long time to create, with work on AMD's Zen architecture starting in 2012, when the CPU Guru Jim Keller returned to the company. Ryzen released in Early 2017, giving an approximately 4-5 year timeframe for a new architecture to move from the concept phase to shipping systems.

Taking the same timeframe and applying it to Radeon and this suggested early 2020 release for their "Next-Gen" architecture, and we can see that this timescale roughly correlates with the creation of the Radeon Technologies Group (RTG) under Raja Koduri. This similarity does not mean that AMD has plans to create a new GPU architecture, but the formation of RTG seems like the perfect time to get started on from the ground up redesign.

Raja Koduri left AMD in November 2017, with his leaked message to RTG employees making several references to the company's roadmap. This included comments such as "I'm fully confident that they can execute on the compelling roadmap ahead", "I believe wholeheartedly in what we are doing with Vega, Navi and beyond, and I am incredibly proud of how far we have come and where we are going" and in his final requests to RTG "Stay focused on the roadmap!". None of these comments explicitly point towards a new GPU architecture, but they do point towards some significant changes in the future. 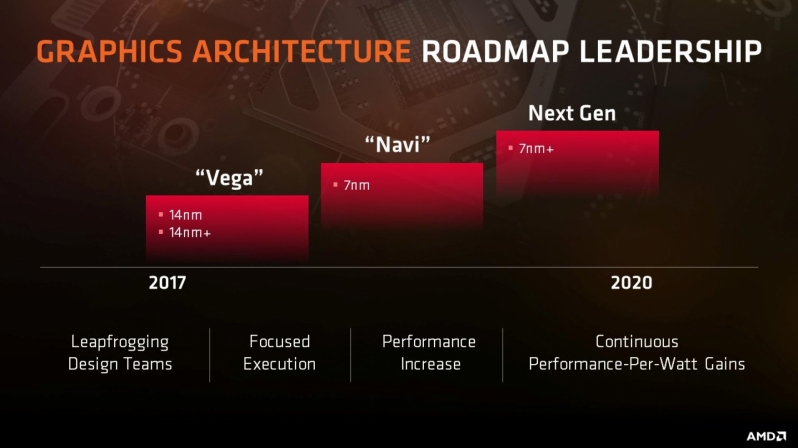 If AMD has started work on a new GPU micro-architecture, the design will have been primarily created by Radeon during Raja Koduri's time at RTG, leaving this hypothetical design to Radeon new leadership to execute Raja's vision and build upon it moving forward.

With Radeon receiving separate leaders in both their business and engineering segments, it looks like AMD plans to increase their focus on Radeon in the coming years, hopefully allowing the group to become a stronger competitor in both the graphics and compute markets. With such extensive changes in management, it is hard to guess what AMD's plans are with Radeon, though a new GPU micro-architecture is certainly possible.

You can join the discussion on AMD's rumoured "Next-Gen" GPU architecture on the OC3D Forums.

Avet
After Vega... I am surprised they didn't start earlier.Quote

RobM
I hope its much better than Vega, it needs to be.Quote

WYP
Quote:
Well, if they are planning something new for 2019, it would need to have started development long before now, with the formation of RTG acting as the perfect time to start.

Right now AMD has confirmed that the design work on Zen 2 is finished, with the product being around a year from release, showcasing how long it then takes to manufacture a big/complex product like a high power CPU or GPU.Quote

Dicehunter
CPU wise AMD are golden, Ryzen is brilliant, But they need a killer GPU, Even if the majority of their customers only buy their mid range cards they need a monster GPU as a crowning piece as more often than not I've noticed, People tend to judge a company by their halo products.Quote

AlienALX
They don't need a killer GPU they need a mid range monster that can actually be overclocked. That is where they will sell lots of GPUs.

I am glad they are ditching GCN. We don't need kitchen sinks.Quote
Reply