AMD has published brand new assets on their GPUOpen website, to aid game developers in achieving the highest possible rendering performance on multi-GPU setups. In a blog post, AMD stated that they provided a CrossFire API as an extension of DirectX 11 since the company launched its Radeon Software Crimson Edition. Sadly, CrossFire API does not yet work on DirectX 12.

In the blog post, AMD published not only a very detailed CrossFire Guide, but also some simple basics on how to take advantage of CrossFire technology, in the form of alternate frame rendering (AFR). In this mode, 'each GPU renders a separate frame. The driver queues up future frames of rendering commands without stalling the CPU and then distributes the queued frames to the various GPUs,' writes AMD. You can see how this works in the image, also courtesy of AMD, below. 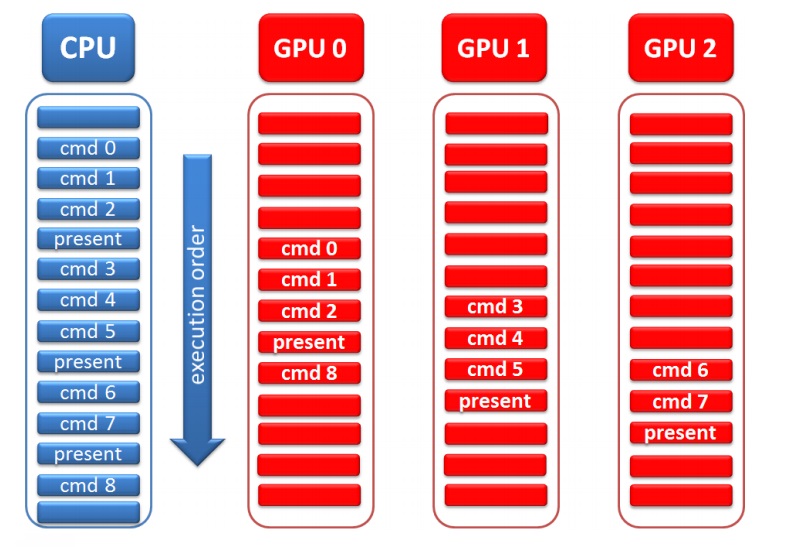 You can check out AMD's blog post about the API here. The detailed CrossFire Guide, which AMD published along with the blog post, can be found here.

You can join the discussion on AMD's CrossFire API on the OC3D Forums.

nvmd
DX12 achieved the highest goal possible, making GPUs from different brands work together. I think it's safe to assume that if it can do that, it can definitely do the same thing without external help for GPUs from the same brand.

So what's the point of this? Give DX12's Multiadapter to DX11? Or are they different from each other? And if so, how?Quote

AverageNinja
Quote:
DirectX 12 is still in its early stages, and there are a lot of (older) GPUs which don't support DX12. Keeping that in mind, developers will have to include DirectX 11 support in their games for at least a couple more years.

That, and AMD's post on GPUOpen is to help developers optimize CrossFire performance, which is never a bad thing. Keep in mind that even when you can combine two brands of GPUs, there will always be people who want to use multiple GPUs from the same brand, rather than mix-and-match, too. For those people, it's very important that SLI / CrossFire is well-optimized, which is what this post is all about.

You do have a point, though. DirectX 12 is obviously the way to go for the future, and the ability to have two different brands of GPUs in your system is great. But as I said, optimizing single-brand CrossFire / SLI configurations will always remain a priority for both AMD and NVIDIA. Just because cards from both brands can work together now, doesn't mean that they're not competitors anymore, so they'll want the best possible optimization for their cards.Quote
Reply