When AMD revealed their RDNA 3 based Radeon RX 7900 XTX and RX 7900 XT, the company did not release a tonne of benchmarking data. Yes, we recieved a lot of information about AMD's architectural improvements with RDNA 3, and we got a look at the performance gains that AMD expected from their RX 7900 XTX over their RX 6950 XT, but we did not receive much in the way of raw data. Today that changes.

AMD has today released more detailed benchmarks for their RX 7900 XTX and RX 7900 XT graphics cards, showcasing both the ray tracing performance and rasterisation performance of their new graphics cards. Below, we can see how both GPUs compare with AMD's last-generation flagship, the Radeon RX 6950 XT.

Below, we can see that AMD has delivered a strong generational improvement with their Radeon RX 7000 series, with both their RX 7900 XTX and their RX 7900 XT launching at prices that are lower than AMD's RX 6950 XT. AMD has made their high-end graphics cards more powerful and notably cheaper, a feat that AMD can achieve thanks to their use of GPU chiplets. 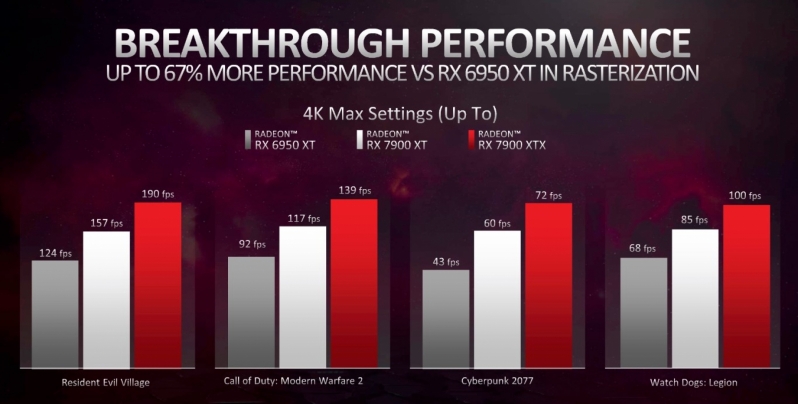 In terms of rasterisation performance, AMD's RX 7900 series GPUs can make high framerate 4K gaming a simple task with modern games, especially when the company's FSR 2 upscaling technology is utilised. In terms of ray tracing, while AMD's performance has improved significantly, it looks like Ray tracing remains a weak spot for Radeon. 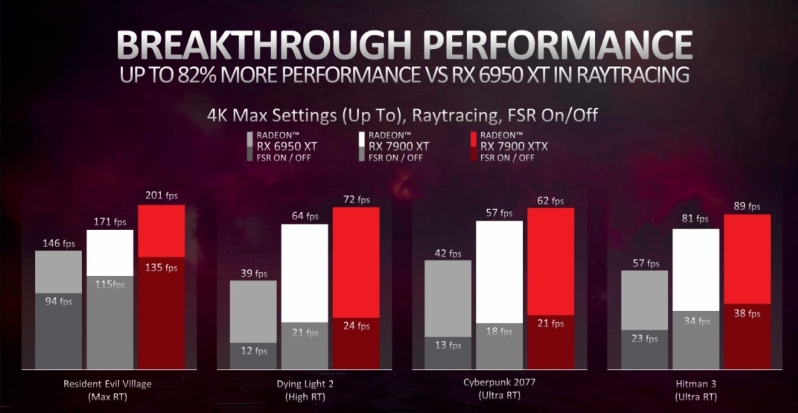 With their Radeon RX 7000 series, AMD has delivered strong performance gains, a wealth of new features, and aggressive pricing. AMD's RX 7900 XTX is an RTX 4080 competitor, and AMD's RX 7900 XTX has a price tag that is $200 lower. This could place Nvidia in a tricky position, especially if AMD's ray tracing performance can come close to Nvidia's.

dazbobaby
I don't play any of those games, so I don't know if the framerates are good or not.Quote

AlienALX
Gamers truly do not care about ray tracing. They just don't.

If those 4k MW2 scores are actually max settings and full scale 4k this is level with the 4090.

That said whilst all of this is very exciting it kinda puts into perspective the 6900XT Asrock that is going for £649, brand new, with £100 worth of games.

The 6900XT could also beat the 3090Ti when overclocked in raster (some titles, not all).

I would strongly suspect that the incoming 7800XT will offer the former flagship performance at £X. If it's £650 or less then for a brand new gen card that is going to be amazing.Quote
Reply