Is AMD's pricing too high?

It's official, AMD has revealed its RX 6600 XT graphics card, an 8GB model that explicitly targets high refresh rate 1080p gaming and aims to deliver a strong 1440p experience through the use of features like FidelityFX Super Resolution.

With a suggested retailer price of $379, which loosely converts to £330 including VAT, this graphics card delivers pricing levels that are similar to AMD's last-generation RX 5700, offers gamers the same VRAM capacity and the extended DirectX 12 Ultimate feature set offered by AMD's RDNA 2 GPU architecture.

Like other RDNA 2 products from AMD, the RX 6600 XT supports hardware-accelerated ray tracing, Mesh Shaders, Smart Access Memory, Variable Rate Shading and other next-generation hardware features. With a TBP (Total Board Power) of 160W, this graphics card should also be easy to power and cool, which is great news for budget system builders and OEMs. You won't need an insane power supply to run an RX 6600 XT inside your system. 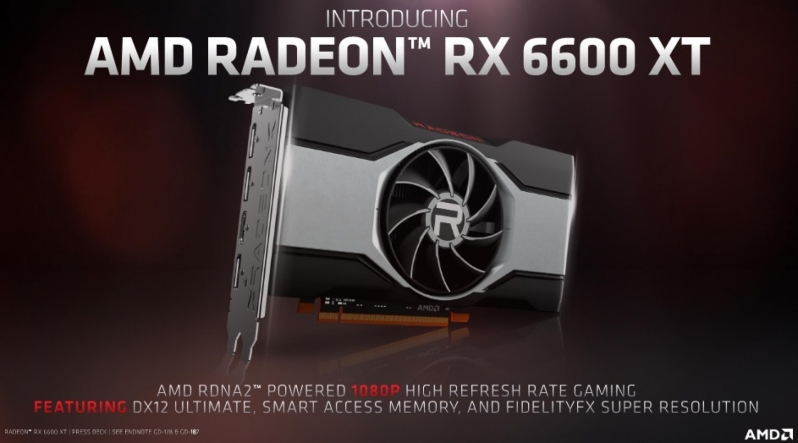 With 32 Compute Units (2048 shaders), and a game clock of 2359MHz, it is clear that AMD's RDNA 2 architecture has delivered some staggering performance benefits to team Radeon. With RDNA, clock speeds of 2GHz weren't common, and now 2+ GHz clock speeds are the norm for the red team.

While 8GB of RAM may not be an insane amount of VRAM, it is worth noting that Nvidia thinks 8GB is enough for much more powerful products. If 8GB of VRAM is enough for an RTX 3070, AMD's RX 6600 XT will be fine. Beyond that, Microsoft's Xbox Series S makes do with 10GB of CPU/GPU combined memory, which means that 8GB GPUs shouldn't become irrelevant anytime soon. 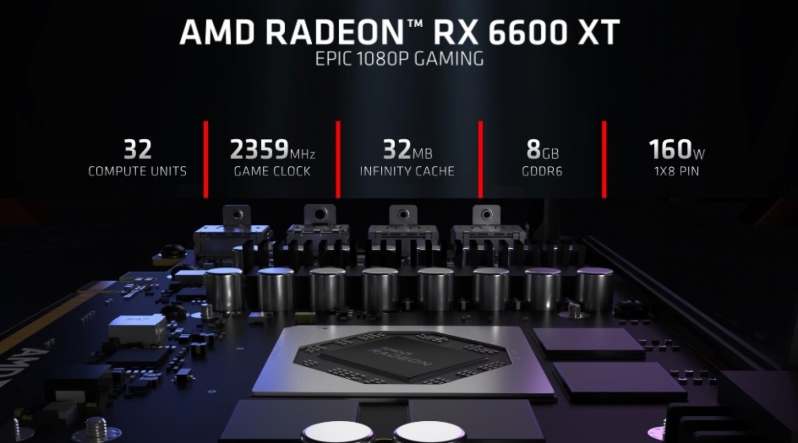 While graphics cards like AMD's RX 580 and Nvidia's GTX 1060 remain popular, these graphics cards are getting a little too old and a little too slow for some modern titles. With AMD's RX 6600 XT, AMD claims that they can deliver gamers an up to 2.5x performance uplift over Nvidia's GTX 1060. This should be enough for a high refresh rate 1080p gaming in most modern titles. 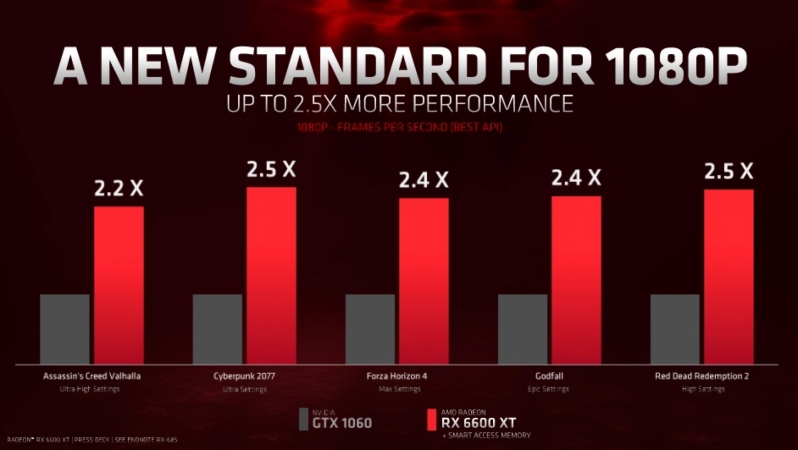 For high-end PC gamers, 1080p may be a little low-end for you, but it is worth remembering that 1080p is the most popular display resolution on the market. It accounts for two-thirds of 2020's shipped gaming displays, at least according to AMD's data. This is why AMD's building a GPU that targets 1080p resolutions. 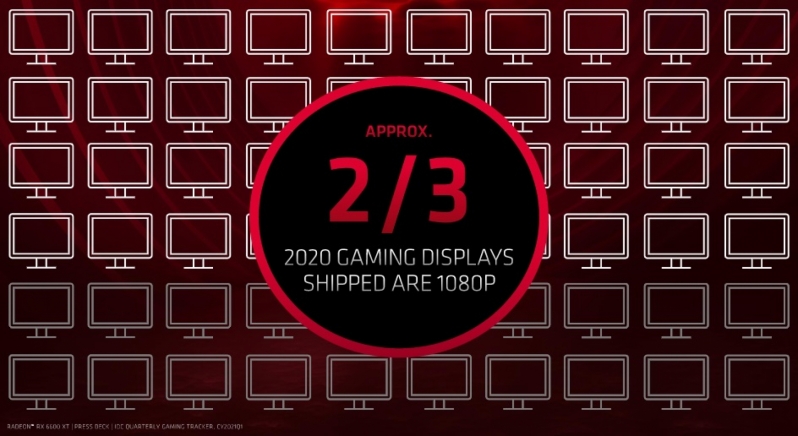 If you are looking for a monitor to work on, you are unlikely to replace your screen anytime soon. For gamers, however, there is a push to upgrade. The display market has seen a lot of growth in recent years within the "gaming" segment, as high refresh rate monitors are growing in popularity. The growth of the gaming monitor market is 20x higher than the standard display market, highlighting the growing demand for high refresh rate screens.

With features like Variable Refresh Rates (VRR) and high refresh rates becoming increasingly popular, the need for a high refresh rate 1080p graphics card has become clear. This is the RX 6600 XT's target market, and it is a big market. 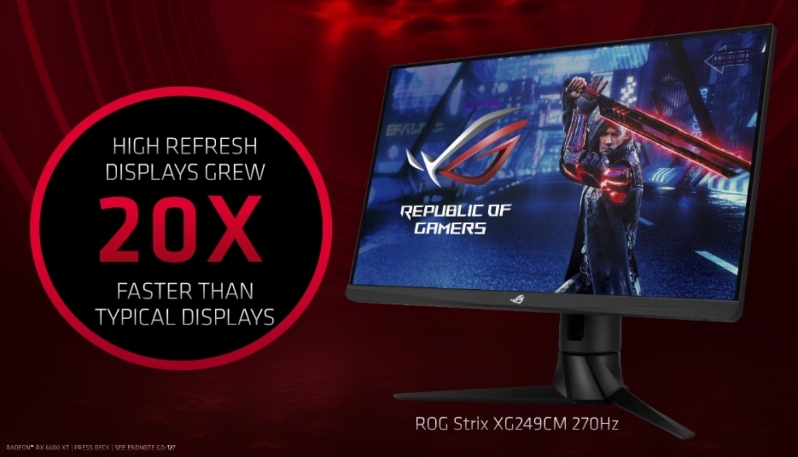 AMD is targetting Nvidia's RTX 3060 with their RX 6600 XT. AMD has claimed that their RX 6600 XT delivers an up to 15% advantage over their rival, claiming 1080p gaming leadership.

That said, the data below does not include many games with ray tracing, and we do not know if AMD's definition of "max settings" includes ray tracing in the games below. Is AMD using each game's Ultra/highest preset, or are they explicitly turning everything on? 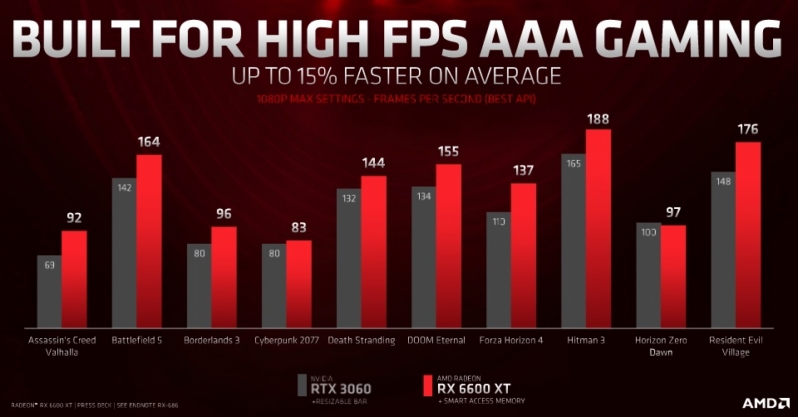 AMD was the first company to deliver Resizable BAR support with their Radeon RX 6000 series through Smart Access Memory. While Nvidia followed up with their own Resizable BAR firmware and driver updates, AMD has claimed that their implementation is stronger than their competition's. 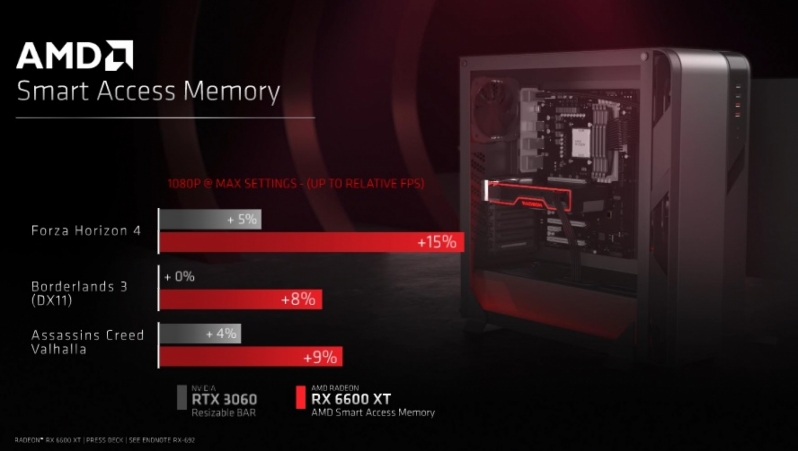 With features like FSR, AMD's RX 6600 XT will be able to target higher resolutions like 1440p and 4K, depending on the hardware demands of specific games. That said, AMD is targetting this graphics card at 1080p gamers, even if 1440p screen users can still achieve a great experience. 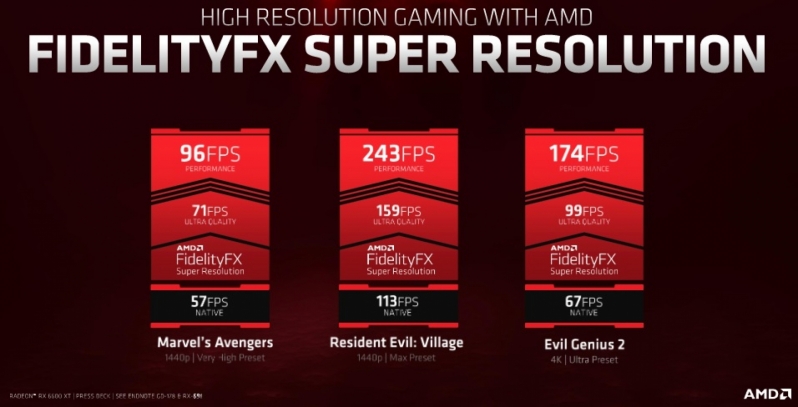 AMD's RX 6600 XT will be launching on August 11th with a suggested retail price of $379. Given the state of today's GPU market, we do not know if we will see many graphics cards hit store shelves at these prices.

Pricing-wise, AMD's RX 6600 XT will ship with an MSRP that is $100 more than AMD's RX 5600 XT, highlighting how the GPU market has changed since this time last year. If prices keep rising like this, a lot of PC gamers will be priced out of the market. 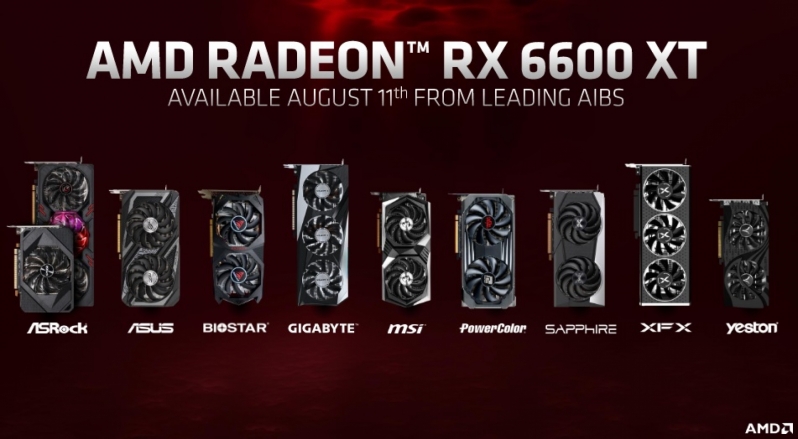 You can join the discussion on AMD's RX 6600 XT graphics card on the OC3D Forums.

After all Ray tracing is a feature, and often a toggle. Much like HDR being a toggle on or off.

Its a nice comparison when choosing a video card. It allows us to decide if we want to value RT or not. For those that dont care for RT, they have a valid benchmark and can sway towards this GPU. If RT is important, they have the results to see that perhaps Nvidia is the go to card.Quote

AngryGoldfish
I feel like these companies have to be careful. If they keep increasing prices, they're going to push consumers away.Quote

WYP
Quote:
A large part of the problem is that component costs, cardboard costs and shipping costs are up. MSRP pricing is difficult to achieve these days with things as they are.

AMD and Nvidia are stuck between a rock and a hard place when it comes to pricing. An MSRP that is too low is unachievable in today's market. A price that is too high is opening them to a backlash from consumers.

I can't wait for the situation to improve, but it will take a while until prices get lower for manufacturers. It's a total mess.Quote

Warchild
Quote:
They already have in my eyes. I always had money set aside for the latest and greatest, but even I look at these prices now and think the value is not there anymore.

I still think back to the days of the 780Ti where it was cost me £700 for the flagship. That will just be enough for a maintstream GPU these days.

And now AMD have a good fight on their hands and dont need to undercut to be competitive, we will see the prices going up not down due to demand.Quote

ImprovizoR
This is going to be at least 450 EUR in my neck of the woods. I'm not paying that kind of money for a 1080p card.Quote
Reply