AMD has released an update for Project ReSX, the company's "Radeon eSports Experience" initiative (More info about Project ReSX here), which focuses on improving the performance and gameplay experience of popular online games on Radeon hardware.

This initiative focuses on two areas, input latency and performance, areas which will allow games to run smoother and feel more responsive to players. AMD has already given Overwatch, PUBG and DOTA 2 the ReSX treatment, but now it's time to discuss Fortnite.

Since the release of Radeon Software Adrenalin, AMD has worked to deliver higher performance levels in Fortnite, promising a performance boost of up to 8% (average framerate) on a Radeon RX 580 and a 7% increase in 99th percentile frametimes. This change will allow the game to feel smoother and lessen the impact of any framerate dips, though the largest improvement can be seen in the game's response times. This data comes from comparing AMD's original Radeon Software Adrenalin 17.12.1 driver and their latest 18.3.3 driver (More information about Radeon Software version 18.3.3 here).

Using the game's Epic Preset at 1080p on an RX 580, AMD promises to deliver response time improvements of up to 13%, giving players a notable advantage when using AMD's latest drivers. This change will allow their actions to appear on screen sooner, allowing players to respond to the game faster and hopefully improve their performance within the game. 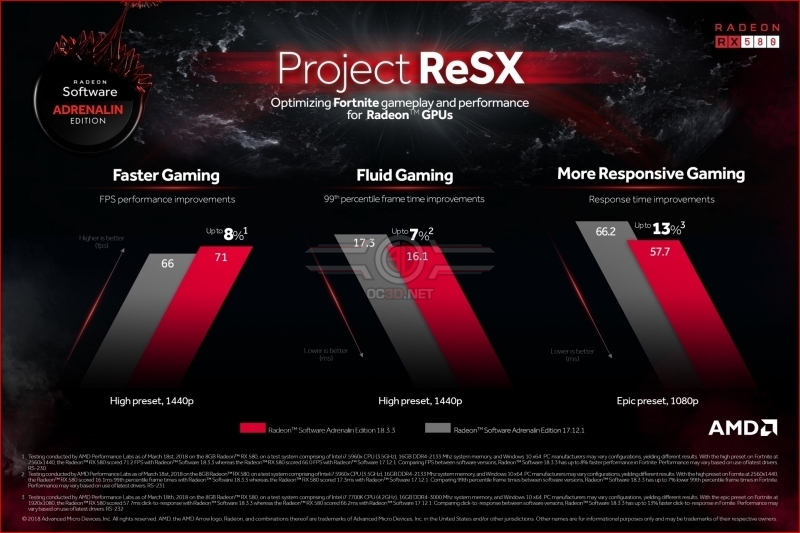 One thing to note here is that a lot of these Fortnite improvements come from Radeon Software Adrenalin version 18.2.2, which offered Fortnite specific optimisations, though at the time these changes are listed as a 6% improvement over version 17.12.1. AMD's latest data reveals that the company has continued to optimise their drivers for Fortnite, making the game faster and more responsive in the process.

AMD's Project ReSX has already delivered some impressive results for gamers, providing a lot of attractive performance enhancements over time in some of today's best PC games. Let's hope that we continue to see these kinds of results over the coming months and years.

You can join the discussion on AMD's Project ReSX performance enhancements for Fortnite on the OC3D Forums.