AMD has revealed its RDNA 3 graphics architecture, and it is impressive

AMD has officially revealed its Radeon RX 7000 series, promising breakthrough performance, solid pricing, and graphics cards that are neither too large for normal PC cases or too power hungry for all but the beefiest of power supplies. RDNA 3 is here, and it is impressive.

With RDNA 3, AMD is focusing on gamers and semi-professional users. With a new media engine, dual video encoders, and support for AV1 encode/decode support, AMD's RDNA 3 graphics cards are designed to excel in gaming workloads and in video editing workloads, which is great news for gamers and creators alike. 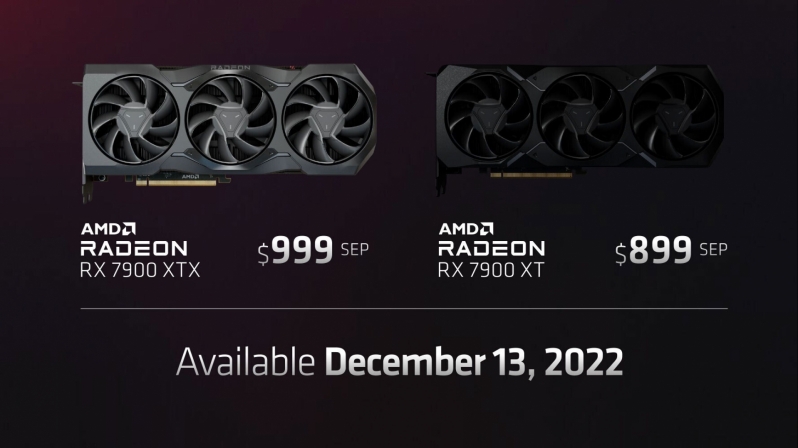 With RDNA 3, AMD is offering gamers that Nvidia doesn't, though it is worth remembering that DipslayPort 2.1 monitors have not reached the market yet, but they will...

AMD's pricing for RDNA 3 is aggressive, because AMD's chiplet-based GPU design has likely significantly decreased the manufacturing costs of Radeon's latest flagship. Not only that, but this allows AMD to offer more VRAM than Nvidia's RTX 40 series at all current price points, with AMD's 24GB RX 7900 XTX being cheaper than Nvidia's RTX 4080 16GB. 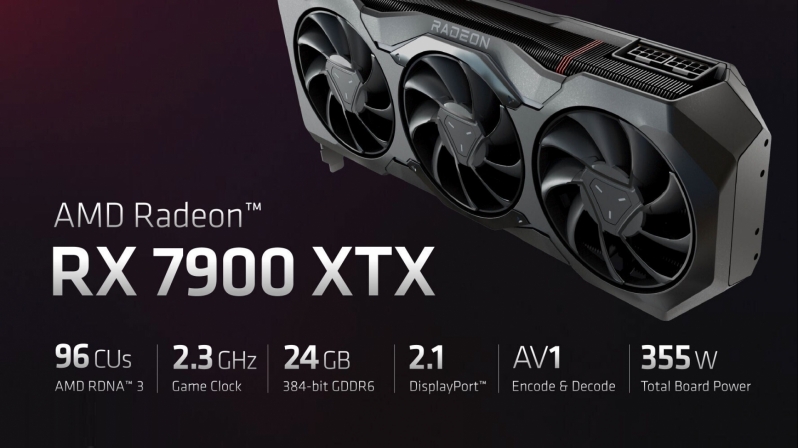 AMD's RX 7900 XT offers users most of the features of AMD's XTX model, but with fewer CUs, lower clock speeds and a lower total board power. For $100 more, AMD's RX 7900 XTX offers more VRAM and more raw performance. TBH, these two GPUs should probably have a large price gap. 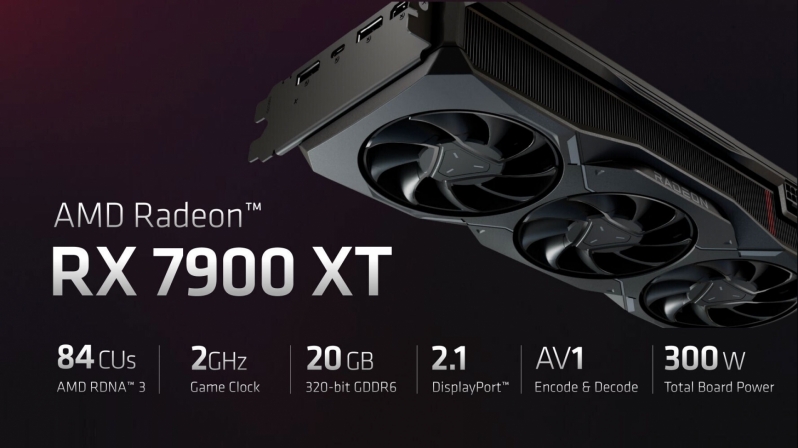 With AMD keeping their power limits within reasonable levels with RDNA 3, AMD can offer their RDNA 3 graphics cards as an easy upgrade path for gamers. AMD's reference RDNA 3 RX 7900 XTX is 2.5 slots thick and 287mm long. This should fit into most modern PC cases with ease, which is great news for anyone who isn't planning to upgrade their entire systems. 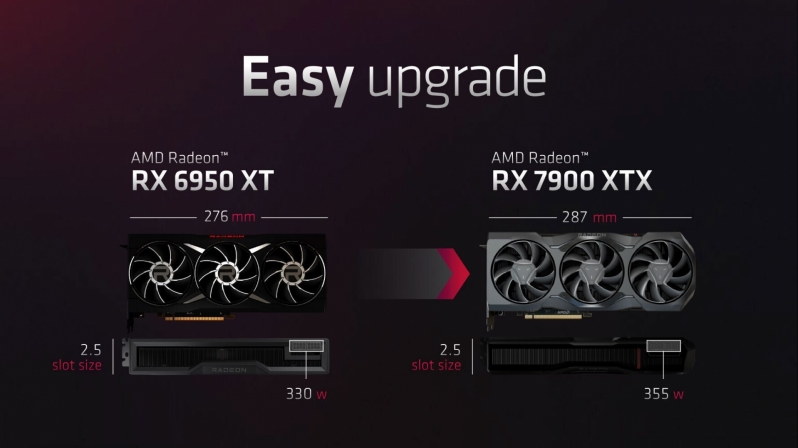 With their Radeon RX 7900 XTX, AMD has showcased 50-70% performance increases across a variety of games, including both ray traced and non ray traced titles.  With RDNA 3, ray tracing is no longer a sore spot for AMD, though a lack of comparison with Nvidia graphics cards suggests that AMD may be still behind within the world of ray tracing. 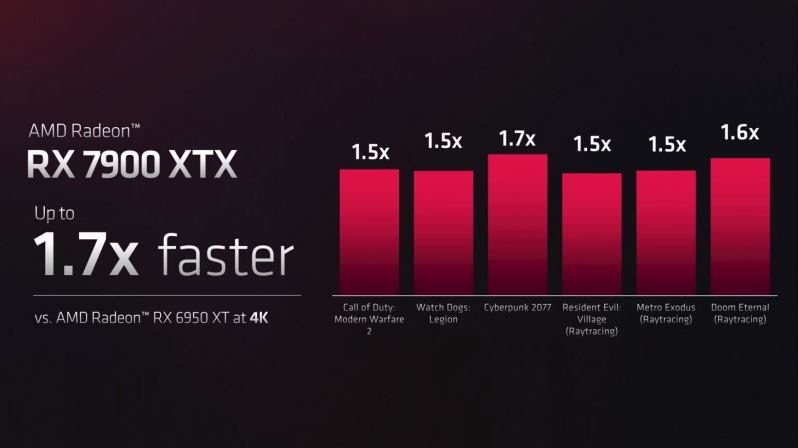 With RDNA 3, AMD has delivered a claimed 54% increase in performance per watt, which is great news for everyone who doesn't want their gaming system to be a space heater, or simply wants their power bills to remain low. 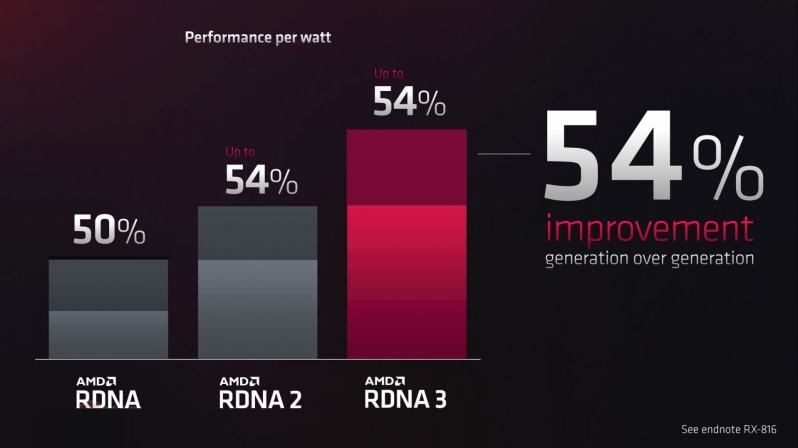 One of the ways that AMD has increased RDNA 3's performance while keeping power draw in check is by decoupling their GPU's front end and shader clocks. By doing this, AMD has claimed that their front end is now 15% faster and that their RDNA 3 architecture delivers 25% power savings.

For overclockers, shader and front end overclocking should deliver interesting results, depending on whether your workloads are front-end or shader limited. 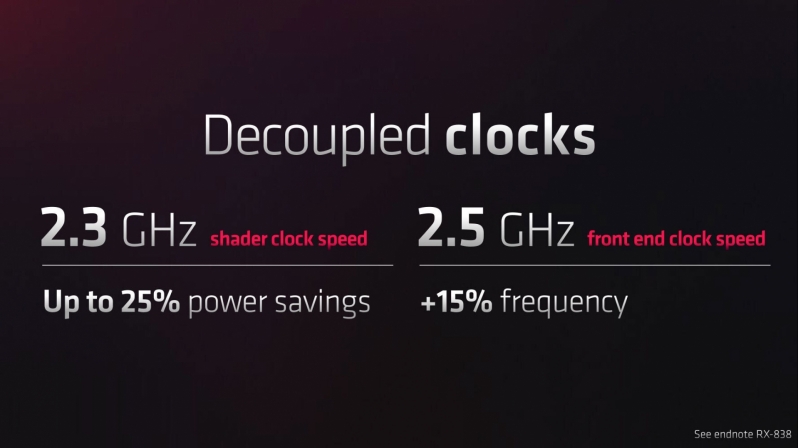 With RDNA 3, AMD are delivering compelling performance levels and aggressive prices. This generation, AMD wants to be seen as the value king, which is great news for PC gamers who do not want to spend over $1,000 on a new graphics card.

Gothmoth
i hope that this will finally have an influence on GPU prices.

AlienALX
Quote:
Hilariously the 3080 12gb has been as cheap at times or cheaper than the 10gb in the UK.Quote

etaXdoa
With the price spread I guess reference 7900xtx will be in short supply and sold out quickly to be replaced with beefed up OEM models with higher prices.Quote

AngryGoldfish
Good showing. The prices are below what I thought they'd be, which is amazing to see. I don't mind personally if the 7900XTX doesn't match the 4090; it's so much cheaper that it doesn't matter. And the size of the card and the efficiency of the architecture is a huge draw for me. I can't wait to see the 7600XT/7700XT cards, because those are designs I'd be interested in buying. I'd be happy with a 6800, but they're too big and bulky and hot.

Funny how ALLLL the leaks and rumours about clock speeds were wrong. Everyone was insisting on 3Ghz or more, but it's actually the same or even lower than RDNA2. Maybe AMD at the last minute decided not to push them because they knew they didn't need to? Excited to see what AIB partners can do once they push these to 450W with 3x8-pin connectors.

Quote:
Probably, yeah. But that happens with Nvidia as well. And when it doesn't, it's because Nvidia is attempting to remove AIB partners completely and take over full control.Quote

Gothmoth
Quote:
a quick look at the three biggest retailers here shows that no 4090 card under 2200 euro is in stock.

in fact i just checked again.
two of the retailers don´t even list 4090 models. you only get a general "out of stock" notice.


imho ...when the radeons are close to MSRP they will be a hit.

i personally don´t know a single person, beside my brother who got one from work, who bought a 4090 or want to buy one for 2000+ euro.

my circle of acquaintances are other engineers in their 40s and other people with fairly decent income. but they don´t want to spend 2000 euros on a graphics card.

i wonder who buys this stuff?

when i speak with colleagues, they tell me they wait for 3090 and 3090TI to become cheaper. others are willing to wait a few month and look what a 4070 will bring.Quote
Reply