AMD's Radeon RX 6950 XT is now available for under £800 in the UK, a price that makes AMD's current flagship graphics card just £50 more expensive than the cheapest Radeon RX 6900 XT in the UK. Not bad for a significant core clock speed boost and faster GDDR6 memory.

Prices for high-end gaming graphics cards have plummeted in recent months, allowing PC gamers to now buy hardware at reasonable prices. With their reference Radeon RX 6950 XT designs, AMD is being aggressive with their GPU prices, more so than what we have seen with Nvidia. Where Nvidia's cheapest RTX 3090 GPUs are just under £1,000, AMD's flagship is now under £800, and let's not mention the price of an RTX 3090 Ti.

With AMD's current GPU flagship dropping to this level of pricing, it is clear that there continues to be downward pressure on graphics card prices within today's GPU market. Whether or not the RX 6950 XT's price will continue to drop remains to be seen, but it is worth remembering that this graphics card launched with prices north of £1,000, with most models costing near £1,200. 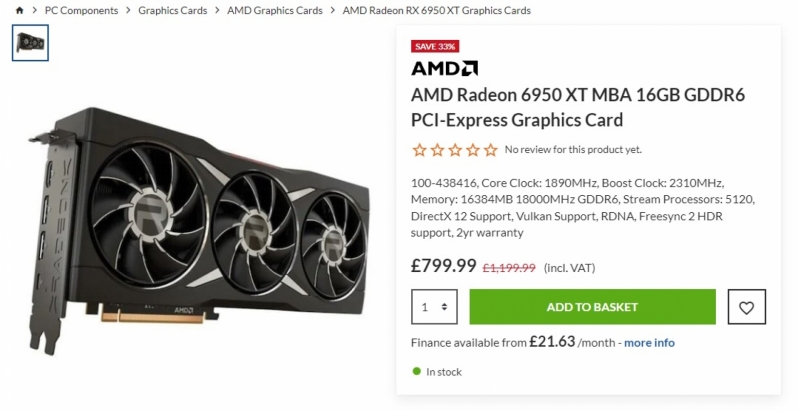 AMD did showcase their first RDNA 3 graphics card at their Ryzen 7000 series launch event, and confirmed that they planned to launch RDNA 3 based graphics cards this year. Sadly, the pricing and performance of AMD's next-generation Radeon products remains unknown, though Lisa Su has commented that RDNA 3's "performance looks absolutely wonderful".

You can join the discussion on AMD's Radeon RX 6950 XT graphics card being available for under £800 on the OC3D Forums.

Piskeante
This is why living in Spain is way too expensive.

In the offer in the UK, the equivalent in  would be around 927

Spanish are always the most screwed people in the entire UE with our dumb-sh*it prices.Quote