While a 22.73 TFLOPs RX 6900 XT sounds excellent, its leaked info is undoubtedly false

Based on the RX 6900 XT's leaked specifications and pricing, the graphics card will cost $999, utilise 18Gbps GDDR6 memory and offer users 14GB of VRAM capacity over a 448-bit memory bus. With this DRAM configuration, the GPU's 1008GB/s of memory bandwidth is possible.

Which such a graphics card sounds incredible, we have found that they contain many of the hallmarks of forgeries, leading us to discount their validity. For starters, AMD would not create marketing slides like this so far away from launch, especially if their slides include retail pricing. AMD would be foolish to have set a price for its next-generation GPUs this early, especially given Nvidia's Ampere launch schedule.

Next up, the image of AMD's Radeon RX 6900 XT is an obvious merger of AMD's existing RX 5700 reference design and AMD's RX Vega 64 Liquid Cooled Edition radiator. Note how the Radeon Logo on the graphics card doesn't match Radeon's new Ryzen-style brand lettering, something which we noted earlier this week with Godfall's latest trailer. This inconsistency and reuse of existing Radeon assets are clear signs that the slide below is fake, especially when combined with the GPU's price listing. 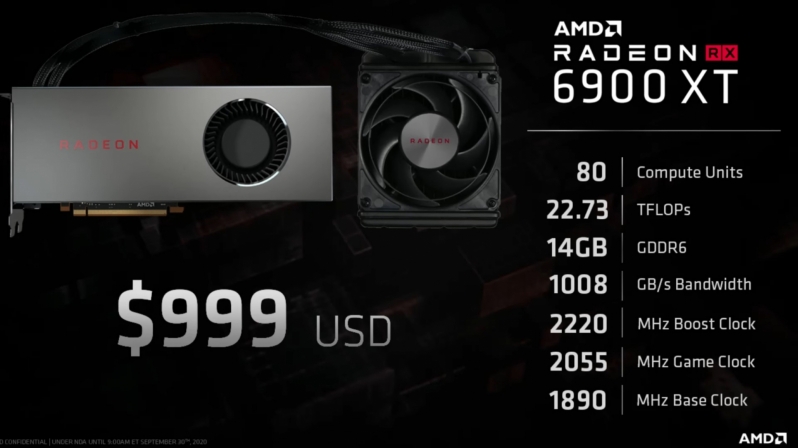 When looking at Moore's Law is Dead's leaked RDNA 2 performance slide, AMD reportedly calls its attracting implementation RXRT, presumably a shortened version of Radeon RX Ray Tracing. The question now is why would AMD call it that? While not all of the games listed use Microsoft's DXR attracting API, as Wolfenstein: Youngblood is a Vulkan-based game, why would AMD call it RXRT when all of these games had their ray tracing implementations created without Radeon's influence?

Another thing to consider is that Wolfenstein: Youngblood uses Nvidia's custom raytracing extensions, which may not be compatible with AMD's Radeon Raytracing hardware. It is also worth noting that Control, one of the best looking RT enabled games on the market, is missing from this list. 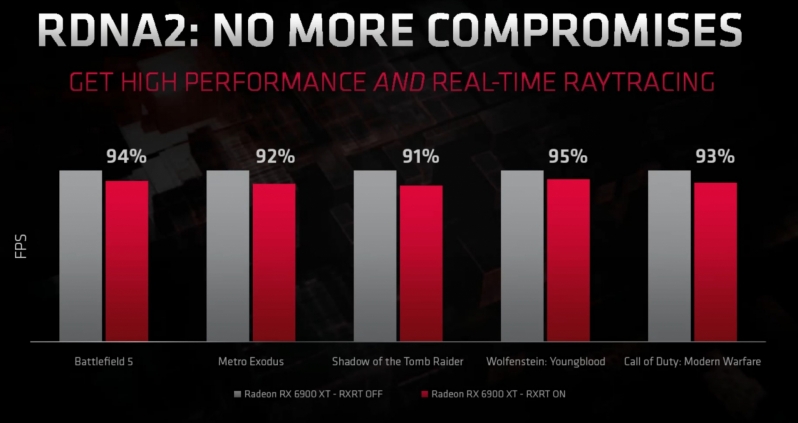 Up next, we have a slide which presumably compares AMD's RX 6900 XT to Nvidia's RTX 2080 Ti, but once again we can see inconsistent notations on these slides.

For starters, Red Dead Redemption is not available on PC; this slide should say Red Dead Redemption 2. Second, "Witcher 3", should say "The Witcher 3" or "The Witcher 3: Wild Hunt". AMD wouldn't incorrectly name the games on its marketing slides. It is also worth noting that the large writing on these slides appears to be resized and pixelated. These artefacts are another sign that these slides are fabricated. 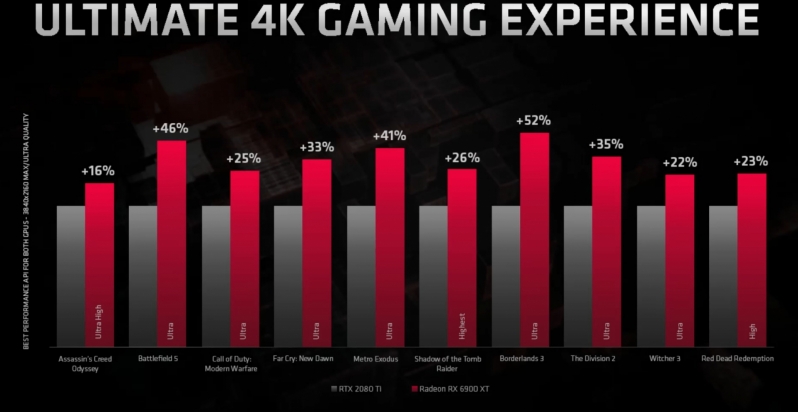 From the slides contradictory Radeon marketing to the false reference design for Radeon's RX 6900 XT, it seems pretty clear that these leaked slides are complete nonsense.

As our headline states, we believe that these slides are a complete fabrication. Don't believe these rumours.

You can join the discussion on AMD's "leaked" Radeon RX 6900 XT slides on the OC3D Forums.

That's hardcore trolling. However, I hope and pray it does not have an AIO.Quote
Reply