Will AMD overcome one of the RTX 4090's big shortcomings?

AMD's RDNA 3 graphics cards are reportedly moving to DisplayPort 2.1 while Nvidia sticks to 1.4a

In contrast, it looks like AMD will be adopting DisplayPort 2.1 with their flagship Navi 31 graphics card, at least according to Kyle Bennett, the former owner of HardOCP.com.

With higher-end DisplayPort connections, AMD's RDNA 3 graphics cards should be able to support ultra high refresh rate displays without Chroma Sub-sampling. This could enable 4K 240Hz screens to enter the market, and for 8K 120Hz monitors to become available. With even Intel supporting DisplayPort 2.0 with their new ARC series GPUs, it is disappointing that Nvidia's RTX 4090 lacks this high-end display connector. 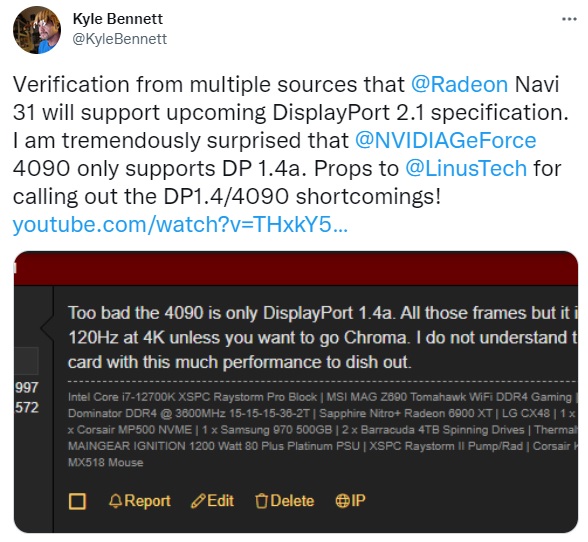 When DisplayPort 2.0/2.1 become more commonplace, display manufacturers will have the ability to target higher refresh rates and resolutions without needing to use compression. This is a big deal for the monitor market, and a factor that makes Nvidia's continued use of DisplayPort 1.4a disappointing. Let's just hope that AMD's RDNA 3 flagship is powerful enough to justify the creation of high-end DisplayPort 2.1 monitors.

You can join the discussion on AMD's Navi 31 GPU reportedly supporting DisplayPort 2.1 on the OC3D Forums.

Though doesn't excuse the issue of spending well over $1000 and not getting the latest hardware support.Quote

Dicehunter
Quote:
My desk thanks you, I just squirted tea out of my nose at mach 10