With their Ryzen 6000 series of mobile processors (codenamed Rembrandt), AMD gave their integrated graphics processing units (iGPUs) a major boost. For starters, AMD moved from their Vega architecture to RDNA 2, and then they increased their iGPUs CU (compute) count from the eight on their Ryzen 5000 mobile processors to a total of twelve. That's a two architectural leaps (Vega to RDNA 2, skipping RDNA 1), and a 50% increase in CU count. Addon DDR5/LPDDR5 memory support to increase bandwidth, and AMD's onto a winner for mobile gamers.

The Radeon 680M integrated graphics solution in AMD's latest mobile APUs can deliver gaming performance levels that are similar to an Nvidia GTX 1060, which is more than enough performance to run most popular PC games.

Based on new rumours from Red Gaming Tech, AMD plans to increase their integrated graphics performance further with their next-generation Phoenix APUs. With these new processors, AMD will reportedly be moving to TSMC's 5nm lithography node and use Zen 4 CPU cores. Conflicting reports claim that Phoenix will be using Radeon's RDNA 2 or RDNA 3 graphics architecture. At this time it is unclear which architecture will be used, though it is worth noting that AMD's APUs tend to use an older Radeon architecture than AMD's discrete GPUs.

AMD's Phoenix APUs will reportedly feature 16 or more GPU Compute Units (CUs), which is a 33% increase over AMD's current-generation Ryzen 6000 mobile Rembrandt processors. This is a huge increase for AMD, especially given the fact that AMD's integrated graphics already compete with Nvidia's GTX 1060.

With 33% more GPU CUs, gamers should expect integrated graphics performance to increase, especially if AMD can also increase their GPU clock speeds or enhance their graphics architecture (either with a refined version or RDNA 2 or RDNA 3). 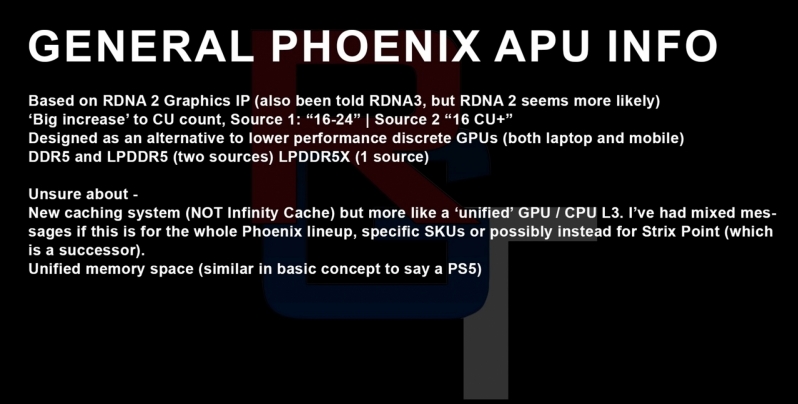 What these rumours could mean for the GPU market

With AMD increasing the performance of its integrated graphics solutions, AMD is pushing hard to make their processors the obvious choice for gamers using lower-end laptops and desktops. High performance graphics will make AMD's processors more appealing to OEMs, lower the PC market's desire for low-end graphics cards from Nvidia, and give AMD an advantage that will make many customers choose their processors/laptops over their Intel counterparts.

Intel is increasing its focus on the GPU market, and that means that AMD needs to work to ensure that their integrated graphics performance remains ahead of their rival. This move is also damaging for Nvidia, as this move will eat away at Nvidia's sales of low-end graphics chips for laptops. That said, AMD will need to work on the non-gaming aspects of their graphics solutions to make their iGPUs more appealing to non-gaming markets. AMD needs their graphics solutions to appeal to creators, not just gamers.

You can join the discussion on AMD's next-generation Phoenix APUs on the OC3D Forums.

AngryGoldfish
This is a great move. Powerful APUs in the low-end is a brilliant idea.Quote


and not only their iGPUs.
i don´t use nvidia for decades because i like the company.
but they give me the least issues and widest compatibility.


i have bought AMD now and then but alway sold the cards pretty fast because i did run into issues with my software.Quote
Reply