CDNA is here, and AMD plans to hit Nvidia hard

November 2020 is a revolutionary month for AMD's Radeon division, with the company's RDNA 2 and CDNA architectures bringing AMD back into contention within both the gaming and HPC markets.

Today, AMD has revealed its Instinct MI100, AMD's first CDNA (Compute DNA) product. AMD claims that this GPU is the "World's Fastest HPC GPU", promising up to 2.1x peak performance per $ when compared to Nvidia's Ampere A100.

CDNA is the graphics architecture which places AMD on the road to exascale computing. AMD has already been tapped to create several exascale supercomputers, and the power of EPYC processors and CDNA graphics is what will bring AMD and their customers to new computational heights. 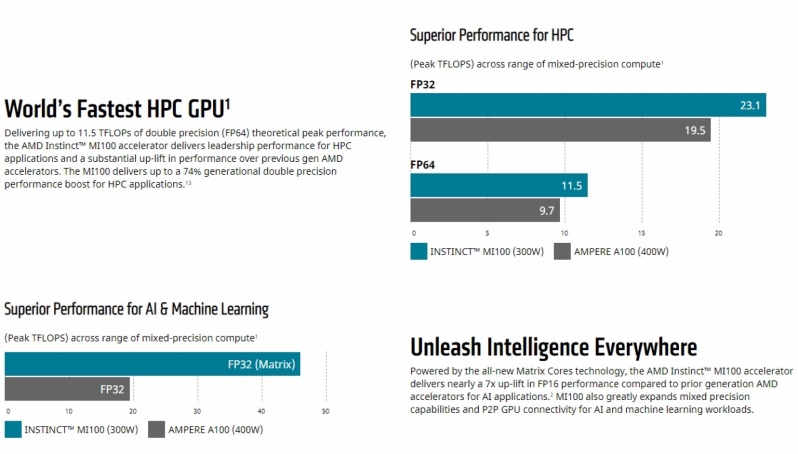 With their CDNA architecture and Instinct MI100 accelerator, AMD plans to compete with Nvidia's HPC lineup and gain market share within this lucrative section of the HPC market. These products should generate notable market share gains for AMD within the HPC market and generate for the company strong revenues.

You can join the discussion on AMD's Instinct MI100 accelerator on the OC3D Forums. 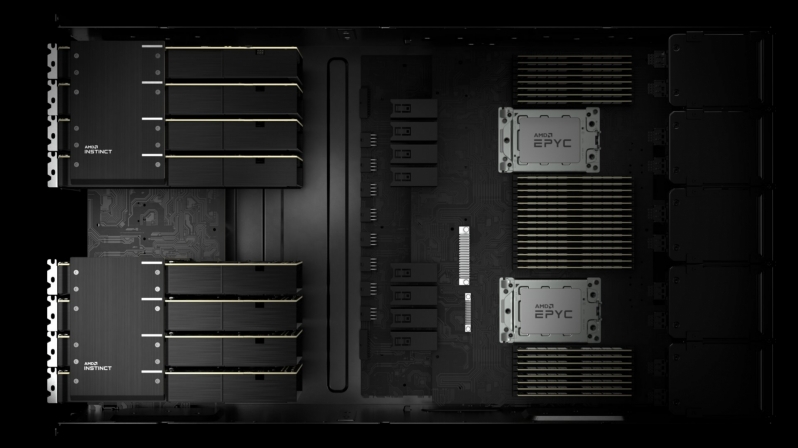 NeverBackDown
That's a seriously strong card. 120 Compute Units?! That's going to be a pretty big die. Wonder how they managed to alter this architecture compared to RDNA2. Would be cool to see the differences.Quote

WYP
Quote:
I'm guessing that the Infinity Cache is gone, and that makes space for compute units. Cutting away other gaming features will also give more space for additional compute.

With this market offering richer margins, AMD may also be getting more aggressive with their die sizes.Quote

NeverBackDown
You wrote in the article specifically mentioning how the Infinity cache improves performance and the AMD source specifically states it's there in multiple sections. I highly doubt they would alter such a major component of the underlying architecture. Altering cache layout would be a massive and expensive undertaking.

Not sure why you are under the assumption all of a sudden it's gone? Unless I'm reading what you said wrong.

I'm assuming the gaming stuff is out, maybe altering the focus of the RT cores to more compute focused tasks and the support needed for that alongside a large die size increase.. still would like to see a direct comparison just because it's coolQuote

looz
Where does the article or AMD page mention Infinity Cache?Quote

I don't know if CDNA has an infinity cache, that's why it is a guess, but with that much HBM2, do they need an on-die cache?

AMD makes no mention of Infinity Cache in their spec page or video.

CDNA and RDNA 2 are designed specifically for certain workloads and price points.

Infinity Cache is a cost-effective solution for AMD and gamers, but when you are using four stacks of HBM2, the cache isn't that necessary. My guess is that AMD saved the die space for additional compute units.Quote
Reply