AMD's next-generation "Phoenix" series APUs are aiming to challenge Nvidia's dominance of the mobile PC gaming market, aiming to deliver discrete-level performance with their next-generation of integrated graphics solutions. With Phoenix, AMD aims to simplify the mobile gaming market by delivering a product that can enable simpler thin & lite gaming laptops while delivering performance levels that are similar to an RTX 3060 mobile graphics card.

Phoenix is a mobile CPU from AMD that will feature Zen 4 CPU cores, feature PCIe 5.0 support, and will reportedly feature up to eight CPU cores and a powerful integrated graphics processor. it is claimed that this APU will feature AMD's RDNA 3 graphics architecture, adding to it design improvements over today's RDNA 2 based graphics chips.

If AMD can deliver mid-level discrete gaming performance with their Phoenix APU, AMD will be able to offer OEMs a solution that will deliver ample gaming performance for many users, require a simplified cooling setup (as only a single processor needs to be cooled), and potentially enable the creation of slimmer gaming notebooks.

Red Gaming Tech states that AMD's Phoenix APU will outperform Nvidia's RTX 2060 and AMD's RX 6500 XT. The iGPU reportedly clocks to 3GHz or more, and the CPU side of Phoenix reportedly had a base clock speed of 4 GHz and a single core boost clock speed of 5GHz. Not bad for AMD's lower power "Thin * Light Gaming" SKU. 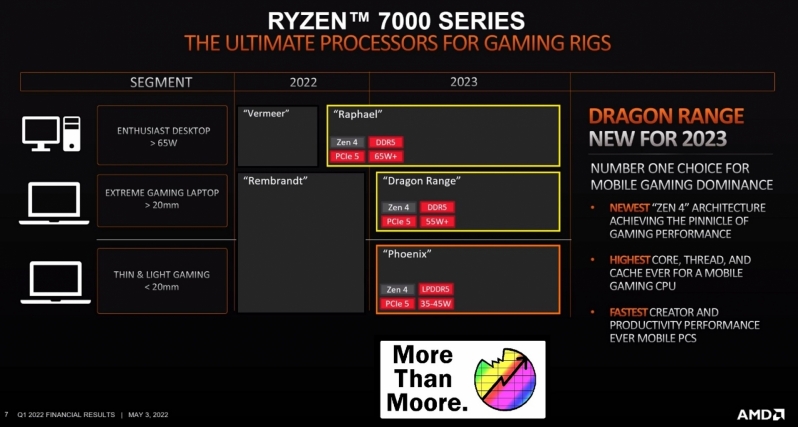 With Phoenix, AMD's is reportedly moving its mobile products to Zen 4 CPU cores and an RDNA 3 graphics component. Two architectural leaps within a single product generation. Beyond that, Phoenix will likely be manufactured using 5nm silicon, delivering additional power efficiency and performance benefits.

Valve has already proven that AMD can deliver excellent low power gaming performance with their Steam Deck SOC, which uses Zen 2 CPU cores and an RDNA 2 graphics component. Just imagine what happens when you move that kind of SoC to a more advanced lithography technology, and move its CPU cores to Zen 4 and its GPU cores to RDNA 3. That's Phoenix.

With Phoenix, AMD is getting aggressive within the low end gaming market. Add on services like PC Game Pass (formerly Xbox Game Pass for PC), and AMD notebooks can quickly become an excellent place for budget PC gamers to start their journeys. Beyond that, if this is what AMD plans to offer with their integrated graphics, just imagine what AMD could have in store with their future discrete GPUs.

You can join the discussion on AMD's Phoenix APU on the OC3D Forums.

KingNosser
Nvidia and the laptop market is going to be harder for them with Intel and AMD able to do APU's, thou i expect in a few years Nvidia will have something coming.Quote

meuvoy
Quote:
Remains to be seen, but I persoanlly think it wont be such a huge blow. Considering all leaks untill now report the new GPUs from both AMD and NVIDIA as being at least 2x as powerfull as current gen, Then a 3060 card would be equivalent to what would be a GT 4040 or GT 4030 if NVIDIA still made such low-end SKUs, They will probably still have an MX GPU stronger than AMD/Intel APUs and if you want serious gaming prowess then you'd need discrete GPU on the laptop. But for any games 2022 or older this APU will be a beast.Quote

ImprovizoR
Quote:
If you don't care about 4K, I think these APUs will be able to deliver solid performance even beyond 2022.Quote

KingNosser
It's not so much the performance but the power needed for the APU's gives a huge boost to battery life and that is something nvidia can't do well on against APU's in thin and light.Quote

The whole reason why Phoenix is such a big deal is because it simplifies production and testing. The performance targets are vital, but it's more that the performance targets as a standalone chip is the key factor. Even if it's weaker than a dedicated GPU that it's supposed to match, like an RTX 3060, it will still be worth it for laptops developers to use the APU variant instead.Quote
Reply