In today's GPU market it is common for manufacturers to release game-specific optimisations for popular releases, working with game developers to provide the highest levels of performance and the best gaming experience that they can.

With the release of Radeon Software Crimson Edition 17.7.2, AMD started to take input latency more seriously, optimising titles to reduce the amount of time it took for inputs to be seen on screen, making games more responsive without increasing the title's framerate. AMD's best improvement at the time was a 31% reduction in input latency in Tom Clancy's The Division, allowing the game to run a lot smoother on Radeon hardware.

Alongside their standard driver initiatives, AMD has been working on what they call Project ReSX, AMD's Radeon eSports Experience. This project aims to improve the performance of popular titles with driver-level fixes, tweaks and optimisations, targeting specific use cases whenever possible to enhance gameplay.

This process includes interaction with developers, which means that AMD will offer to help optimise their game engine or game code either locally, at AMD, or on-site with the game's developers. At this time it is unknown how long this process takes or how many developers have or plan to take AMD up on their offer.

In the slide below AMD details some of the fruits of their labour, which includes an 11% performance boost in PUBG and a 99th percentile framerate boost of 9%. In Overwatch, AMD reports a 3% performance boost and a 4% reduction on click to response time, with the company also reporting a 6% improvement in DOTA 2, with a 7% improvement in their 99th percentile framerate performance and an 8% increase in their click to response time. 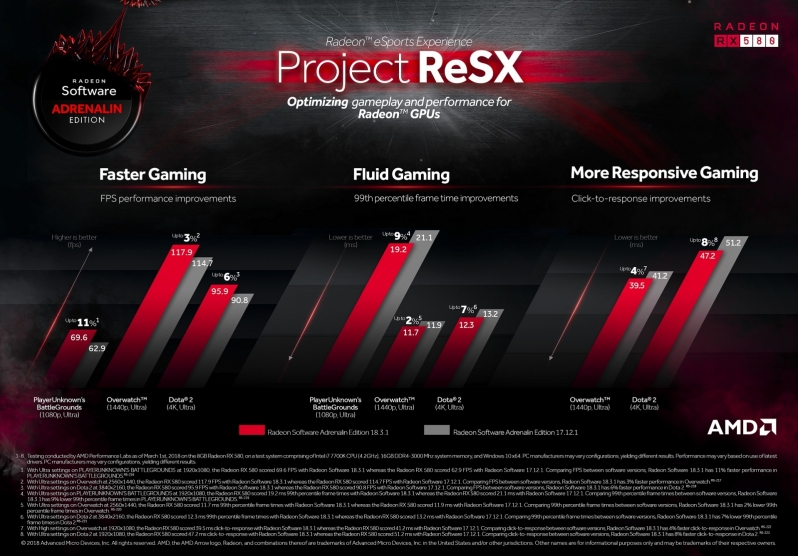 AMD's efforts here will do a lot to improve their relationships with developers, while also making their products more competitive with the competition. AMD has also stated that these optimisations will transfer over to AMD's other graphics architectures, with some of these gains being potentially greater on Radeon RX Vega series GPUs.

From the sounds of it, Project ReSX will be a continuous effort from AMD to improve their GPU performance in the world's most popular PC gaming titles, something which will hopefully continue to bear fruit in the coming weeks and months.

You can join the discussion on AMD's Project ReSX on the OC3D Forums.

The Zealot
Very nice, but where's the graph for Starcraft 2, Quake Champions, and Fortnite?
What about non-eSports titles like Civilization VI, Europa Universalis IV, Stellaris, Total War and other games with popular multiplayer?Quote

WYP
Quote:
Give it time, hopefully AMD will be able to bring these kinds of changes to more titles in the future. Rome wasn't built in a day.

That being said I think AMD needs to improve their relations with Epic Games and bring optimisations to the Unreal 4 Engine, where AMD typically has a performance disadvantage.

Please correct me if I am wrong, but Quake Champions doesn't have that many players. It isn't even on Steam's top 100 charts anymore.I remember playing at its early access launch and there weren't that many players either.Quote

AlienALX
I hope they can make FO4 work better. Will be playing it on a Fury X soon, possibly in VR...Quote