Here's what to expect from RDNA 3

With RDNA 3, AMD plans to continue increasing the efficiency of their Radeon graphics architecture and gain a leadership position within the GPU market by creating high-end multi-chip graphics cards. According to Moore's Law is Dead, a popular hardware leaker, AMD plans to increase the MSRP pricings of its high-end product offerings while also delivering users a tremendous boost in gaming performance. This change will increase AMD's MSRP pricing while also giving gamers much more performance per dollar spent.

Navi 33 is reportedly the first RDNA 3 graphics core that AMD will launch in 2022, a relatively mid-range RDNA 3 design that promises to deliver rasterisation performance that's similar to the company's RX 6900 XT graphics card. This GPU reportedly will feature 8GB of GDDR6 memory and ship with a price tag that is much lower than today's Radeon RX 6900 XT.

With this launch, AMD wants to highlight the performance and pricing offered by RDNA 3, and stress the efficiency of their latest gaming architecture. Some believe that Navi 33 will be used to create a Radeon RX 7700 XT series graphics card in September or October 2022.

AMD;s RDNA 3 flagship is Navi 31, and it is set to debut AMD's use of 3D stacked 5nm and 6nm silicon in gaming oriented graphics cards. Moore's Law is Dead has reported that this graphics card should feature a TDP of 375-450 watts depending on the model, and should offer levels of rasterisation performance that is 90-130% faster than AMD's Radeon RX 6900 XT.

If these claims are accurate, AMD will deliver an incredible generational leap in performance with their RDNA 3 flagship. That said, it is currently unknown how RDNA 3 will perform in ray tracing workloads.

AMD's RDNA 3 flagship will reportedly feature 512MB of Infinity Cache and feature a 256-bit memory bus. It has been alleged that AMD has multiple GPU designs planned for their Navi 31 design, one of which could feature a smaller 256MB Infinity Cache.

PCIe 5.0 will reportedly be supported with RDNA 3, lining up well with AMD's Zen 4 CPU architecture and AMD's Ryzen 7000 series products, which will also support PCIe 5.0. 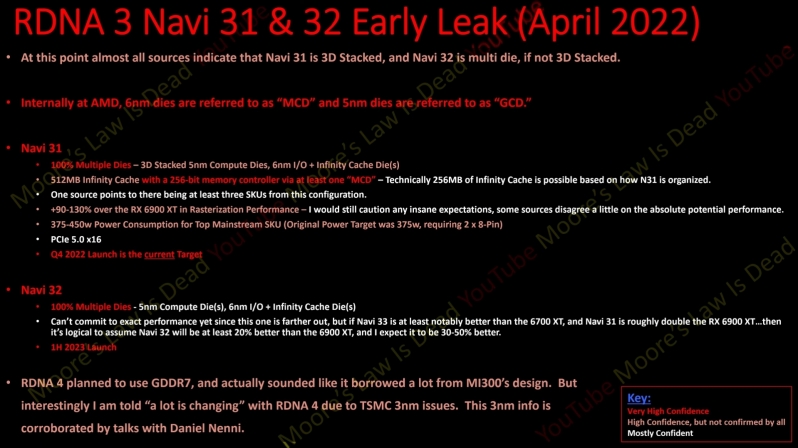 Between Navi 31 and Navi 33 is Navi 32, a GPU design that sits between AMD's two aforementioned GPU designs that's expected to launch in the first half of 2023. This GPU design should also use multiple dies, though it is unknown how this new SKU will perform or how it compares with Navi 31 or Navi 33, aside from the fact that it will be less performant than the former and more performant than the latter.

What we expect from RDNA 3

If the latest rumours regarding RDNA 3 are anything to go by, AMD's RDNA 3 architecture is a design that's focused on efficiency. If Navi 31 can run at 375 watts and achieve 90%-130% more performance than an RX 6900 XT in standard workloads, AMD's power efficiency will have almost doubled within a single generation. Remember, AMD's RX 6900 XT is a 300W graphics card. Delivering around double the RX 6900 XT's performance with a 75W increase in power draw is an incredible achievement.

You can join the discussion on AMD's RDNA 3 launch schedule, performance, and more on the OC3D Forums.

NeverBackDown
Won't matter if the software side doesn't catch up to Nvidia's.Quote

KingNosser
Maybe in terms of the fluff Nvidia use but in terms of drivers and UI software AMD are way ahead, still like they say if it's not broken don't fix it hense why nvidia is using such an old control panel, also lets face it i doubt anyone likes geforce experience AMD combined the two things into one and it works far better.

NeverBackDown
You can have your opinion it however doesn't matter in the grand scheme of things. It's what most people want and AMD don't deliver.Quote

Dicehunter
I like AMD's hardware but the problem is they seem to hire "totally awesome chilled dudes and dudettes" straight from college who have lofty aspirations of "totally cool open ideals maaannn" for their driver team where as Nvidia seem to hire people who have engineering degrees, Are software and coding wizards and just want to release the most stable product possible.

I ran a 6900XT briefly and the drivers were crap compared to Nvidia's, If they sorted that aspect out AMD would give Nvidia a serious run for their money.Quote

KingNosser
Well both sides have had their fair share of issues on drivers, but the UI and app is way better they just need to keep building on that, personally had zero issue with anything and no bugs in games, so while maybe i'm lucky i've not ran into issues.

Wasn't so many years ago that nvidia released a driver that killed cards, imho all nvidia care about is being top and raising prices each gen locking out features and generally trying to find a way to keep doing that.

I'll not even be suprised if when they release the 4000 series that some form of dlss will not work on the older generations. it's just how they do things.

I had issues in the past with AMD software but in the last 15 months since having my card i've not had a single issue, so yep i have my opinion.

Intel have got even less chance than AMD since not really many of you want to switch gpu brand you just want cheaper cards and your not get them any time soon.

It's like all things someones system with the same hardware will be unstable where as someone else wont have an issue, it can be many things.

still least you can enjoy 16pin 1000watt psu's tbh i don't see the market changing much at all anytime soon.Quote
Reply