AMD has made a new Radeon graphics card available on their website, the RX 6800 XT Midnight Black, an all-black graphics card that gives Radeon's "Made by AMD" RX 6800 XT design a stealthier appearance.

This new "Midnight Black" Edition of AMD's Radeon RX 6800 XT will be the same as AMD's existing reference/"Made By AMD" RX 6800 XT model in terms of performance, utilising the same 2.5-slot heatsink design with the only major aesthetic change being its utilisation of a mostly black colour scheme. This means that AMD's RX 6800 XT will feature the same clock speeds, stream processor count, Infinity Cache size, and power limits as AMD's existing models.

Like most newly launched graphics cards, AMD's RX 6800 XT didn't stay in stock long enough for us to actually see the graphics card available on AMD's web store. While this situation was expected, it is nonetheless a disappointing sight. Somehow, AMD has managed to create a more exclusive version of their Radeon RX 6800 XT, and that's saying something given how difficult to purchase the RX 6000 series already is. 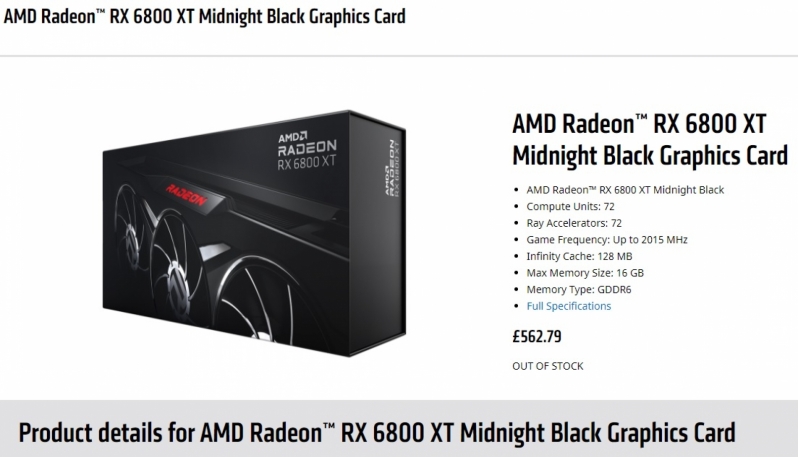 Damien c
Not shocked at all, I have serious doubts as to whether these would have been able to be bought by anyone.

I am currently convinced that most of these being sold by retailers are either being sold directly prior to release to miners or some of the staff are prepping orders so as soon as they go live, they buy them and then they turn up on Ebay hours later.Quote

Bartacus
So they released a card with a different color air cooler that still sucks and holds the cards performance back. Sounds legit, will not be missed.