It has been revealed that AMD will be enabling Crossfire support on their RX Vega series of GPUs with their upcoming Radeon Software 17.9.2 driver, offering some impressive scaling levels on a variety of popular titles.
At this time nothing else is known about AMD's upcoming 17.9.2 drivers, though there are expected to release fairly soon given AMD's year, month, release number naming scheme (2017, September, Second driver of the month). Sadly the image below only includes average framerate data, or detail the settings and resolutions used in each game, though these are likely to be unveiled later with this driver's official release.
Techpowerup has stated that AMD is only supporting dual GPU Vega configurations at this time, though it is unknown if this is a recommendation or a hard limit. Nvidia has also made similar moves when they released their 10-series of Pascal powered GPUs, limiting official SLI support down to just two cards. 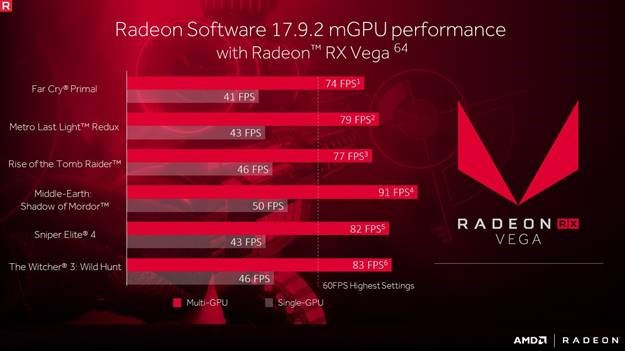 At this time it is unknown when AMD will release their 17.9.2 GPU driver, though it is expected to be soon given the number of high-profile releases that are coming later this month.

You can join the discussion on AMD's Radeon Software Crimson 17.9.2 driver on the OC3D Forums.

NeverBackDown
Think they should focus on single and dual cards before they try to do 3/4 cards. I'd rather they focus in on improving a single card, but if they are going to do this I'd prefer just 1/2.Quote

AngryGoldfish
Well, those ten people with two Vega GPUs are going to be happy.Quote
Reply