We already know that AMD has big plans for its RDNA 2 architecture, the design which underpins both next-generation consoles and Radeon's Navi 2X series of graphics cards. Now, we may know precisely how big AMD's upcoming RDNA 2 series graphics cards are, assuming these reported die sizes have any legitimacy behind them.

As with all rumours, take these die sizes with a grain of salt. This information lines up with existing rumours and our expectations of AMD's RDNA 2 series of graphics hardware, but that doesn't mean that these specific leaks are legitimate.

The die sizes of three RDNA 2 powered graphics cards have been listed on the ptt.cc message board, as reported by @KOMACHI_ENSAKA on Twitter, revealing Navi 21, Navi 22 and Navi 23 graphics chips with 505mm², 340mm² and 240mm" die sizes respectively. These are large die sizes for RDNA 2, especially when compared to AMD's RX 5700 XT, which has a chip size of 251mm². The die sizes of AMD RDNA 2 chips are said to be accurate within 5mm². 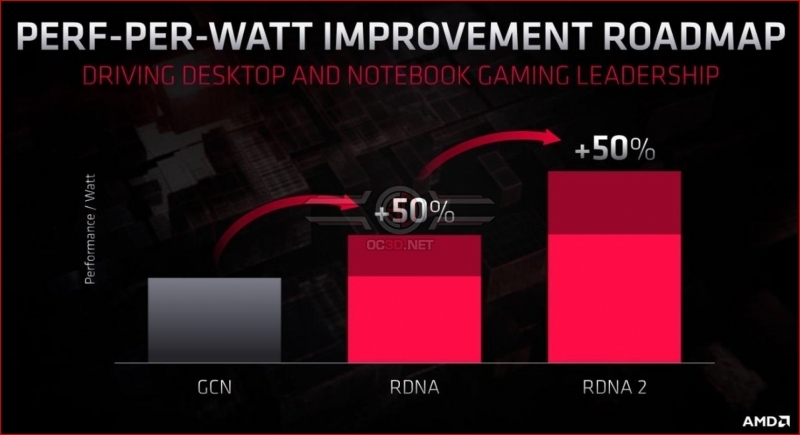 All of these graphics chips are too large to fit onto an AMD-powered APU, and with RDNA 2's promise of increased IPC and higher clock speeds, even AMD's smallest RDNA 2 chip could prove to be more powerful than AMD's RX 5700 XT.

A die size of 505mm²  is over two times larger than AMD's RX 5700 XT, making a 2x increase in performance a definite possibility for AMD's flagship RDNA 2 graphics card. Add in AMD's promised increase in efficiency and IPC, and a greater than 2x performance boost seems extremely likely. 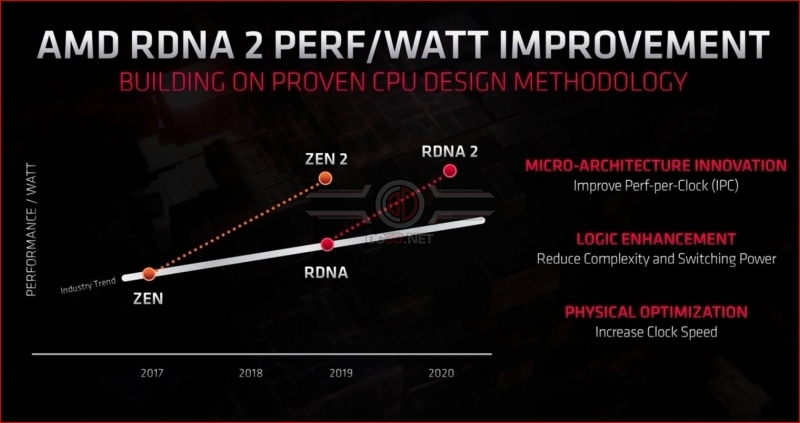 These features will bring AMD in line with Nvidia's RTX feature set while offering the same hardware architecture as both next-generation consoles. This means that developers will be making their raytraced games with AMD in mind, which is something which will certainly benefit AMD in the long run.  AMD also promised lower-level API support, though at this time it is unknown how much this feature will benefit the average gamer. 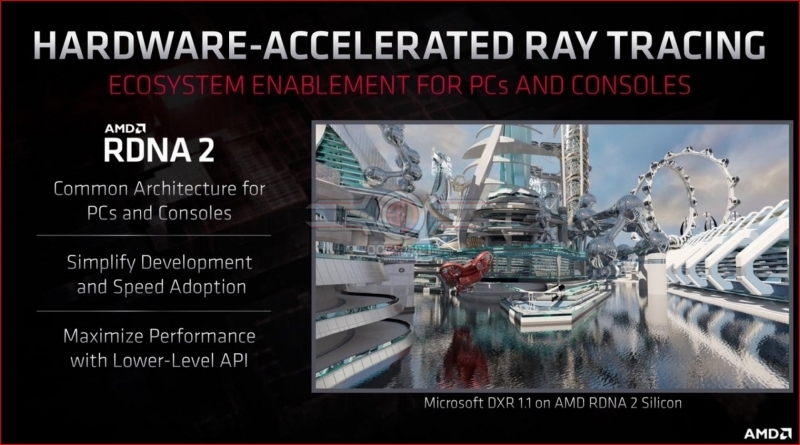 RDNA 2 is everything that a gamer could want from a next-generation Radeon product. It promises higher clock speeds, increased efficiency and more performance per clock cycle. When it comes to hardware features, Radeon is now in-line with many of Turing's advanced features, which is great news for those who want the latest technologies within their graphics cards.

With AMD offering a 50% increase in performance/watt, RDNA 2 is set to have a transformative effect on the GPU market, both for desktop PCs, for consoles and for gaming notebooks.

You can join the discussion on AMD's RDNA 2 graphics architecture and AMD's rumoured Navi 2x die sizes on the OC3D Forums.

Dicehunter
AMD need to give this thing a decent price especially if it's only going to be as fast as a near 2 year old 2080 Ti, I know early "leaks" show it could be twice the speed of the 5700Xt which would put it a nice chunk faster than the 2080 Ti but I've learned my lesson with AMD GPU's, Expect less and you won;t be disappointed.Quote

AngryGoldfish
If it does end up being twice as fast as a 5700 XT, which I don't see being an impossibility given the die size comparison, that would be incredible. If they could keep the price within the €700 ballpark, the 2080Ti would become an even bigger joke than it already is. If you apply the same math as the Navi 21 die being twice as powerful as the 5700 XT because it's twice as big, the smaller Navi 22 chip should be as fast as a 2080Ti. If they price it the same as they've priced the 5700 XT, I'm getting that.Quote

AlienALX
I wouldn't call the 2080Ti a joke. Over priced? yes, but that is what you get with a flagship product that has no competition.

Ryzen prices have slowly crept up. At launch the 3950x was £750. That's a lot of money tbh, but that is what happens when you achieve that feat. You can charge whatever you like. You don't even really have to sell loads, because your lower tier products will mop up sales.

If the 2080Ti still costs what it does when this launches I don't expect it to be any less than £800. Even if they only get away with it for a week or two. R7 launched at £700. And it was notably worse than the competition at the same price.

I do expect Nvidia to release 3000 though, which should slap AMD back into reality. So I hope that they can manufacture it cheap 'cause I see it getting rather bloody.

For now it looks like I did good on that too ffs.Quote

ET3D
Quote:
I don't see why the 2080 Ti's release date should have an effect on the price. All AMD needs to do is compete with the 2080 Ti's current price. It could reduce the price if NVIDIA releases a successor at the same price, but if AMD beats the 2080 Ti in performance, I don't see a need to sell it short if that's the only competitor.Quote

Avet
I don't expect AMD to have a 3080 Ti killer. Hopefully, something will be in the ballpark of 3080. That would be nice. It would restrain Nvidia from going haywire with the prices.

I really hope these cards will be a success for AMD. I don't know how many more failed generations can Radeon division survive.Quote
Reply