AMD's RX 7950X will be even more powerful

Rumour has it AMD is confident that their RX 7900 XT can best Nvidia's RTX 4090, and that GPU isn't AMD's flagship!

AMD's set to launch their RDNA 3 graphics architecture on November 3rd with the reveal of their Radeon RX 7000 series of graphics cards. These GPUs will be the first AMD graphics cards to utilise 5nm lithography, a chiplet-based design, and the company's re-architected RDNA 3 compute units.

With RDNA 3, AMD is expected to deliver a major performance/watt leap over today's RDNA 2 graphics chips, with AMD promising a 50+% uplift. Rumour has it that their planned Radeon RX 7900 XT graphics card will feature 20GB of GDDR6 memory and be a competitor to Nvidia's RTX 4090. Even better is reports that AMD's RX 7900 XT isn't their RDNA 3 flagship, which means that AMD could have a proper Nvidia-beater on their hands.

AMD's RDNA 3 flagship, what's likely to be called the RX 7950 XT, reportedly features a 384-bit memory bus and 24GB of GDDR6 memory. This graphics card would have a memory bus that is 50% wider than AMD's Radeon RX 6900 XT. This GPU is reportedly AMD's answer to Nvidia's RTX 4090 Ti graphics card, a GPU that features the full potential of their Ada graphics architecture. 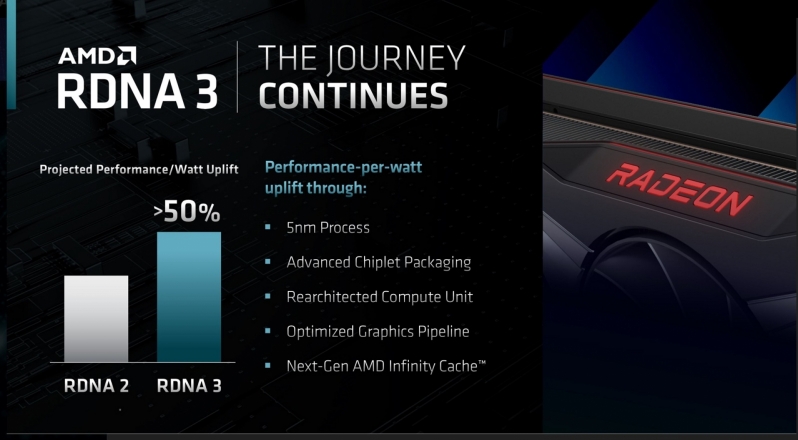 If today's rumours are correct, AMD's very confident about their RDNA 3 graphics architecture. Huge gains in rasterisation performance are expected over their Radeon RX 6000 series GPUs, and AMD's re-architected compute units and other architectural changes are expected to have a major impact on AMD's ray tracing performance. How RDNA 3 compares with Nvidia's RTX 40 series remains unclear, but if RDNA 3 is as impressive as it sounds, AMD is onto a winner. That said, we doubt AMD will have an answer to DLSS 3 anytime soon.

You can join the discussion on AMD's Radeon RX 7900 XT graphics card on the OC3D Forums.


Although they had those back a decade or so ago I believe.Quote
Reply