If there is one thing that we hate about AMD's Ryzen 5000 series, it that it lacks high value sub-£200 product options for budget PC gamers. Yes, AMD's Ryzen 5 5600G is available within that price range (sometimes), but its smaller L3 cache makes it less appealing to gamers than AMD's other Ryzen 5000 series models.

According to MEGAsizeGPU on Twitter, AMD plans to launch three new value-oriented Ryzen 5000 series CPU models alongside their gaming-optimised Ryzen 7 5800X3D. These new CPUs aim to deliver more value for money than their Intel counterparts, acting as an answer to Intel's i3 and i5 Alder Lake lineups.

Given the age of AMD's AM4 socket, low-cost Ryzen compatible motherboards are widely available. On top of that, DDR4 pricing remains reasonable, making AMD's Ryzen 5000 series a great option for budget PC builders. This is especially true for those who already own Ryzen compatible PCs. Upgrading just your CPU is much cheaper than upgrading your motherboard and CPU. It only gets worse if you also need DDR5 memory.

AMD's rumoured Ryzen 5 5500 targets Intel's i3-12100, with estimated pricing of around £135. This CPU will offer users six cores and six threads. Intel's i3-12100 has four cores and eight threads, and this factor alone should give AMD a huge multi-threaded performance advantage. Add on overclocking support, and AMD's Ryzen 5 5500 should be a budget PC champion.

Higher up, we have AMD's Ryzen 5 5600, a non-X counterpart of the Ryzen 5 5600X. This model should only be slightly slower than a Ryzen 5 5600X and feature the same core/thread count. This model is expected to target pricing that's cheaper than Intel's i5-12400, which is currently Intel's best budget gaming processor.

With the Ryzen 7 5700X, AMD will be offering gamers performance levels that should be slightly lower than their Ryzen 7 5800X. This model will undercut Intel's i5-12600KF, giving AMD users access to a strong Zen 3 8-core processor at a lower price. 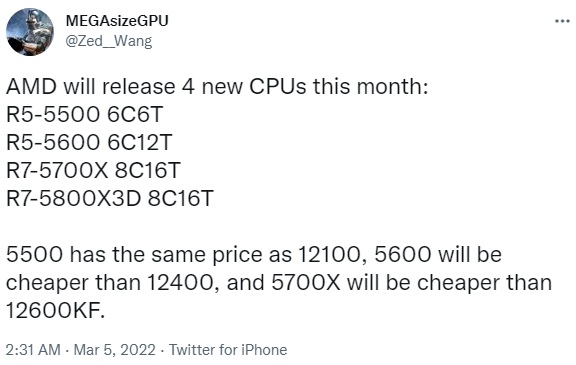 AMD's tactics here are obvious, they are responding to Intel's Alder Lake series processor with cost reduced models that target budget PC builders. If you have a Ryzen 5000 series compatible motherboard, AMD wants you to upgrade to the Ryzen 5000 series. If you are building a new budget-optimised PC, AMD wants you to to choose Ryzen or Intel Core.

With Alder Lake, Intel offers great value for money with their i3 and i5 series CPU models, forcing AMD to respond with new models and lower pricing. This is good news for consumers, especially for those who are building PCs on tight budgets.

You can join the discussion on AMD's rumoured budget-oriented Ryzen 5000 series CPU models on the OC3D Forums.

AlienALX
Shame they took so long.Quote

Piskeante
Retailers are scalping the prices masively. There is NOWAY you will see this prices go down noticeably.
So basically this news is like almost fake, since the price will not be accurate after scalping prices.Quote

AngryGoldfish
Quote:
I understand why AMD didn't offer them at launch, but to allow Intel to take the budget crown was silly I think. Maybe they had logistical reasons for doing it, but if they could have offered cheaper parts and chose not to in order to retain this new image of 'high-end' that they have claimed, I think that was foolish.Quote

AlienALX
Quote:
It wasn't just the budget crown Intel took. The 12700k and 12900k are also cheaper than their AMD counterparts and faster in gaming. The 12600k is the hands down choice for gamers, and I wouldn't really call that a budget CPU.

Unless you are using an AMD CPU as a workstation CPU (5900x and 5950x) then there really is no reason to buy anything from them right now. They did drop prices a tiny bit, but still nowhere near enough. They were all more expensive than the Intel counterparts when I upgraded.

Well, I think upgrade is a little misleading here. I had a 3950x but wanted better gaming performance so I sacrificed cores. However, I would have been perfectly willing to drop to a 5900x but it was £80 more than the 12700k.

So instead I moved that into another rig and went Intel. And it was a pain in the balls, but if AMD were not even going to try and compete to keep me? then screw them.

It's almost like there's some sort of conspiracy between these companies sometimes. Every time they get the chance to perform a death blow they back off a bit and don't.

Intel did very well with the 12 series. However, if AMD had been aggressive and dropped prices immediately? then no one could have really said it was worth going Intel.Quote
Reply