Finally, a GPU that I can afford

AMD has delivered what PC gamers want, an affordable GPU

2021 placed the PC gaming market into a bad place. Demand outstripped the world's supply of graphics cards, leading to inflated pricing, a lack of stock at retailers, and price inflation within the used GPU market.

Today, AMD has revealed their Radeon RX 6500 XT graphics card, the company's answer to PC gaming's affordability crisis. A sub-$200 graphics card that promised to deliver strong 1080p gaming performance despite its low pricing. That said, it remains to be seen whether or not this GPU will have the same supply issues as other RX 6000 series GPUs.

Like all other RDNA 2 graphics card, AMD's RX 6500 XT is fully compliant with Microsoft's DirectX 12 Ultimate standard and supports features like FidelityFX Super Resolution. the graphics card will feature a 4 GB frame buffer, 1024 stream processors and clock speeds that can boost beyond 2800 MHz. Not bad for a budget-oriented graphics card.

AMD plans to launch their Radeon RX 6500 XT on January 19th for $199. At this time AMD has not showcased custom AIB variants of this graphics card. 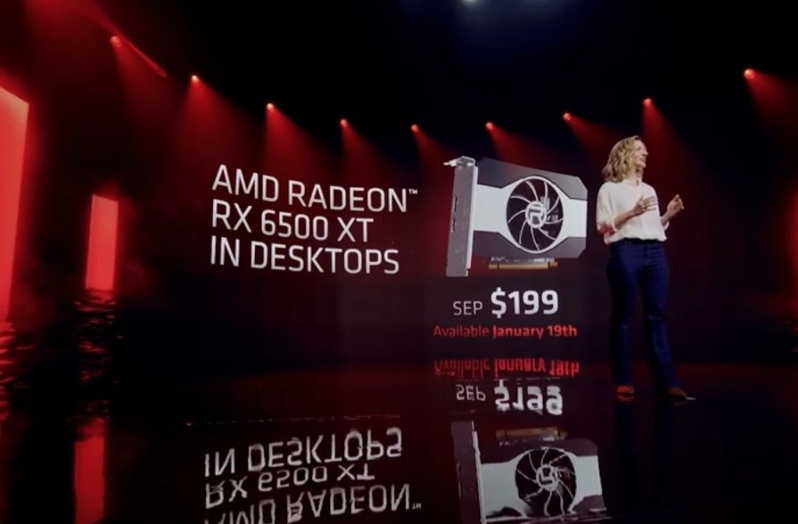 With a small 4GB frame buffer, AMD;s RX 6500 XT graphics card will be a GPU that is unappealing to many cryptocurrency miners. This is good news for PC gamers, as this will lower demand for Radeon's sub-$200 graphics card from non-gamers. Thanks to AMD's Infinity Cache technology and its 18 Gbps GDDR6 memory, this graphics card should have ample memory bandwidth for modern games at 1080p. While 4 GB of GDDR6 VRAM is not much, it will be enough for all modern PC games with the right graphical settings.

Below are the specifications of AMD's RX 6500 XT.

AMD's new RX 6500 XT is expected to outperform graphics cards like Nvidia's GTX 1650 and AMD's RX 570 graphics cards by significant margins. While these graphics cards are by no means high-end, it is encouraging to see that AMD is pushing up the performance of the low-end GPU market.

You can join the discussion on AMD's RX 6500 XT graphics card on the OC3D Forums. 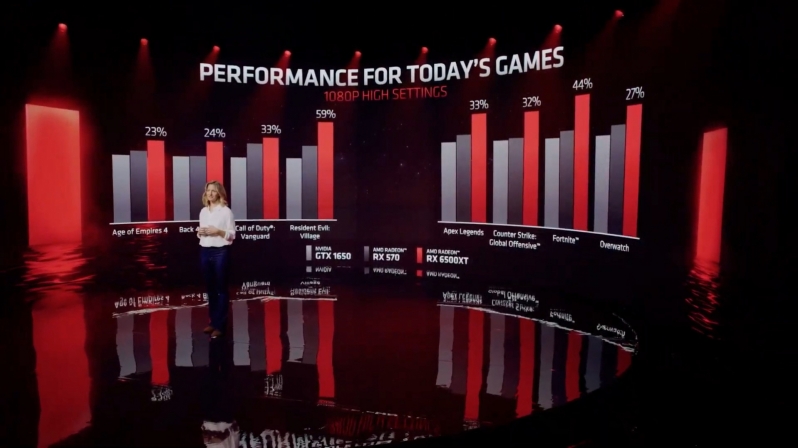 NeverBackDown
$200 is a godsend right now. I know so many people who desperately need an upgrade but can't afford the terrible prices. This would be a nice stop gap care for themQuote

KingNosser
I just hope they have made more than normal, as people are screaming for cards and would rather buy a $200 new than a 2nd hand 970/580, this is much needed not everyone is like me and a total gfx whore some are just as happy on medium 1080p, the market has been crying out for this type of card and if i'm being really honest it's these cards that should be launched first i really mean that.Quote

AlienALX
The size of the die will give them much higher yields per wafer just on its own tbh. Plus the failure rates are reduced drastically too.

Problem is how many people need them. These are not cards you want, but need.Quote

AngryGoldfish
Awesome. I really hope these are actually the supposed price.Quote

WYP
The 4GB frame buffer is both a blessing and a curse. While I think 4 GB is too small, it is too small for Ethereum mining.

That said, set textures to high and 4GB is fine. This isn't a GPU for Ultra setting anyway.Quote
Reply