RDNA 2 is built for gaming, not mining

AMD's RDNA 2 architecture is built for gaming, not cryptocurrency mining, making the architecture deeply sub-optimal when it comes to Ethereum. Yes, Radeon graphics cards remain profitable, but there is a reason why AMD's ageing Radeon VII can outperform anything within AMD's current-generation product stack.

Thanks to the Crypto Mining Blog (via Videocardz), we now know the Ethereum mining hash rates of AMD's Radeon RX 6700 XT, and its a lot lower than its last-generation counterpart, the Radeon RX 5700 XT.

According to the Crypto Mining Blog, AMD's Radeon RX 6700 XT offers a hash rate o around 43.5 MH/s, which is much lower than the 54.75 MH/s hash rates that the RX 5700 XT can offer. No, AMD has not throttled the performance o their RX 6700 XT; they've just designed it with gaming in mind, not mining. 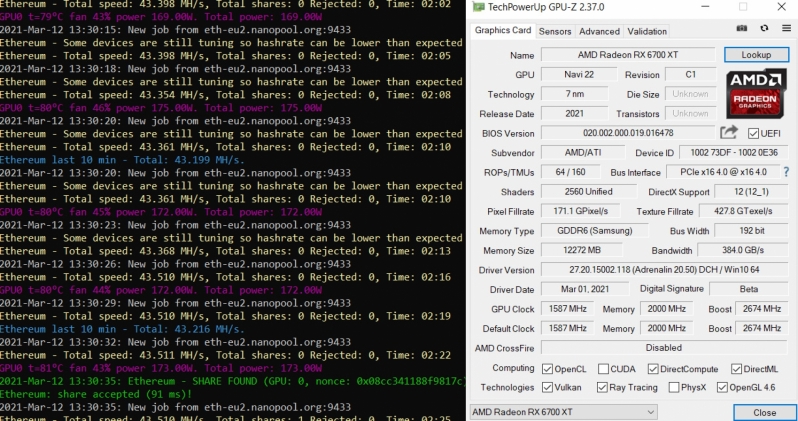 Mining Ethereum requires a lot of memory bandwidth and will max out any modern graphics card's memory performance. After a certain point, adding more compute into the mix will not improve your mining performance, which is why most cryptocurrency miners overclock their VRAM and lower their GPU core clock speeds to enable peak performance and maximised efficiency within their systems.

With this in mind, it is easy to see why AMD's top-performing mining graphics card is the Radeon VII, as it offers over 1TB/s of memory bandwidth. This is also why older graphics cards like AMD's RX Vega 64 will compete with the Radeon RX 6700 XT when cryptocurrency mining.

Bandwidth is why Nvidia's RTX 3080 is such a highly sought after graphics card for cryptocurrency mining on the Nvidia side, as it combines a wide 320-bit memory bus with high-speed GDDR6X memory modules. This is also why the RTX 3060 Ti and RTX 3070 offer the same mining performance, as both offer users 8GB of GDDR6 memory across a 256-bit memory bus.

AMD RDNA 2 architecture minimises Radeon's need for raw memory bandwidth by adding a last-level cache to their latest graphics cards. This cache is called Radeon Infinity Cache, and it is not useful to cryptocurrency miners.

Ethereum mining workloads are too large to benefit much from AMD's Infinity Cache, which is why Ethereum mining is most profitable on graphics cards with fast memory and a wide memory bus. AMD's RDNA 2 allows Radeon to achieve high levels of gaming performance without an ultra-wide memory bus', making it an architecture designed for gamers, not miners.

If AMD wants to make an ultra-fast mining graphics card, all they need is a re-release of their Radeon VII with faster HBM2 memory modules. As it stands, RDNA 2 is deeply sub-optimal for mining, and that is a good thing for gamers. 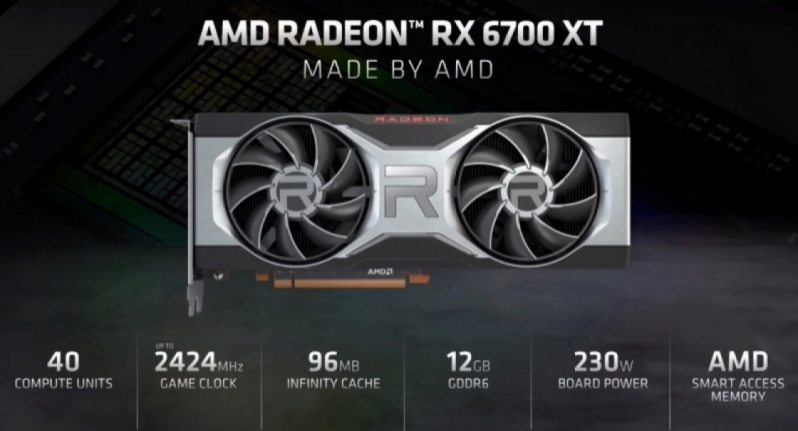 You can join the discussion on AMD's Radeon RX 6700 XT and its lower than last-gen cryptocurrency mining performance on the OC3D Forums.

NeverBackDown
As long as it turns a profit they will sell.Quote

AngryGoldfish
But isn't it the case that miners aren't buying tens of thousands of AMD GPUs like they are with Nvidia. From what I've heard, AMD have only released a tiny amount to the market. Nvidia's launch was not a paper launch. They had stock, a lot of it. It just got bought out. AMD had very little stock; it just looks like they had more because Nvidia had more.Quote

KingNosser
Stock on the 6700XT's is meant to be a lot better than the other 6000 series.

But you could always buy my 970 i just listed

Other card i have is going to a friend.

I think this is a good mid range card the only issue i have with it is that it's still going to cost a little more than it should really even with the extra ram. There really needs to be a card that performs well around the £250 mark for the masses the fact it's not good at mining won't really matter tbh they will sell regardless.

I have all the DXR games other than Godfall and my 6800XT plays them more than well enough tbh and driver wise i've had only one minor issue they have been pretty rock solid at least for me.

It's a shame they don't still bundle some games with these cards even if it's just one title rather than 3 but i guess they need to scrap back all they can from them for one reason or another.

Edit: One of my 970's sold gg easy money feels a bit OP to get twice it's real value, so i picked up godfall off humble it's on offer atm and i'll have a little extra in the bank for a change