AMD's RDNA 2 architecture has already proven to be popular amongst gamers, bringing AMD's products back into high-end competition with Nvidia, recurring AMD a strong position within today's market. Even so, AMD needs some major performance leaps to become a performance leader, and that's why AMD has set some high performance targets with their RDNA 3 graphics architecture.

According to Moore's Law is Dead, AMD is internally confident that their RDNA 3 architecture will provide them with a graphics card that's 60-80% more powerful than their Radeon RX 6900 XT, with the YouTuber predicting that AMD's RX 7900 XT will "at a minimum be 40% better than the RX 6900 XT".

AMD has already confirmed publically that they target large performance/watt gains with their RDNA 3 architecture, hoping to achieve a similar uplift as their RDNA-to-RDNA 2 shift. This will give RDNA 3 a 50%+ gain in efficiency over RDNA 2, which is great news for all gamers. Lower power draw allows AMD to fit more performance into their graphics cards without facing power or thermal limits, which is great news for desktop and mobile GPU users alike. 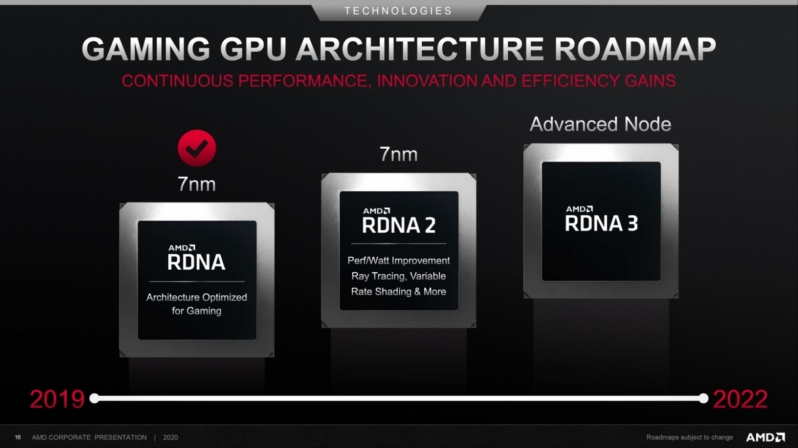 Moore's Law is Dead has also claimed that AMD's next-generation RDNA 3 graphics cards will offer gamers a significant increase in Ray Tracing and Geometry performance per Dual-CU, a factor which will help to enable stronger performance for Radeon graphics cards in titles that rely on ray tracing.

With RDNA 3, AMD reportedly believes that they "can truly win" against Nvidia, a bold claim. AMD's Radeon graphics architectures have seen staggering levels of improvement in recent years, and if AMD can continue this rate of improvement, there is no reason why AMD can't achieve their bold performance targets,

AMD has already publically claimed that their RDNA 3 based graphics cards would use an "Advanced Node", suggesting that RDNA 3 will be a post-7nm product. Whether or not RDNA 3 will be based on TSMC's 5nm lithography node remains to be seen, though such a move is probable. 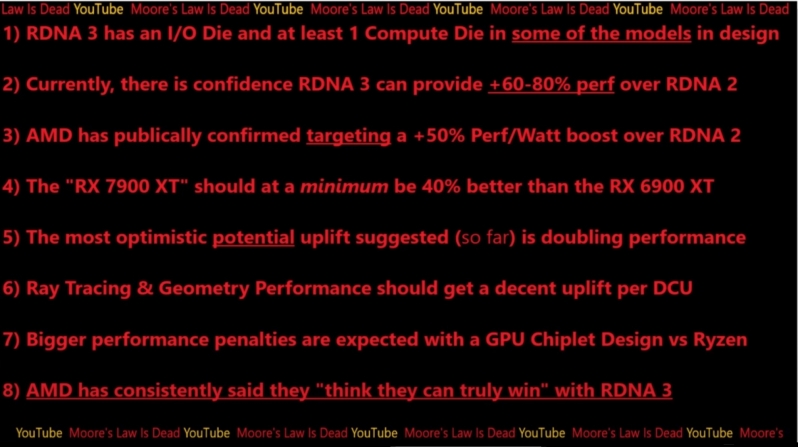 Whether or not these rumours prove to be true remains unseen. That said, we know that AMD is not sitting on their hands when it comes to Radeon's architectural development. With the success of Ryzen, AMD now has the finances that they need to execute their R&D visions with RDNA, and that should help create a GPU market that's more competitive than ever.

You can join the discussion on AMD's rumoured RX 7900 XT GPU performance targets on the OC3D Forums.

AngryGoldfish
I can't imagine we'll get these any time in the next 12 months. AMD and Nvidia have no need to release anything new at this time unless they can get more 5nm than 7nm from TSMC. Both companies have good architectures currently that are in high demand and will be for another year. I can imagine AMD will hold off on RDNA3 until the end of 2022.Quote

grec
Quote:
It's possible that the easier manufacturing/better yields of chiplet based designs vs monolithic make a push for this new approach quite desirable with the manufacturing challenges facing the current monolithic models, if they can get more chips per wafer with a denser node, without taking a yield hit, or maybe even a yield improvement, due to the split up MCM design, could mean a notably stronger supply is possibleQuote

AngryGoldfish
Quote:
But then why aren't there more 6700XT's? That's a high profit margin part that should be easy to manufacture and isn't great for most mining farms, yet it's unavailable everywhere.Quote

Warchild
Quote:
The silicon shortage has hit everything and everyone. Mobile phones, TVs, Car equipment, GPU, CPU even you smart coffee machine. There is a serious global shortage. So I don't believe one bit that AMD have ramped up production to meet demands unless they make their own.

Ford in UK I believe has shut down car production because of lack of computer chips due to the shortage.Quote
Reply